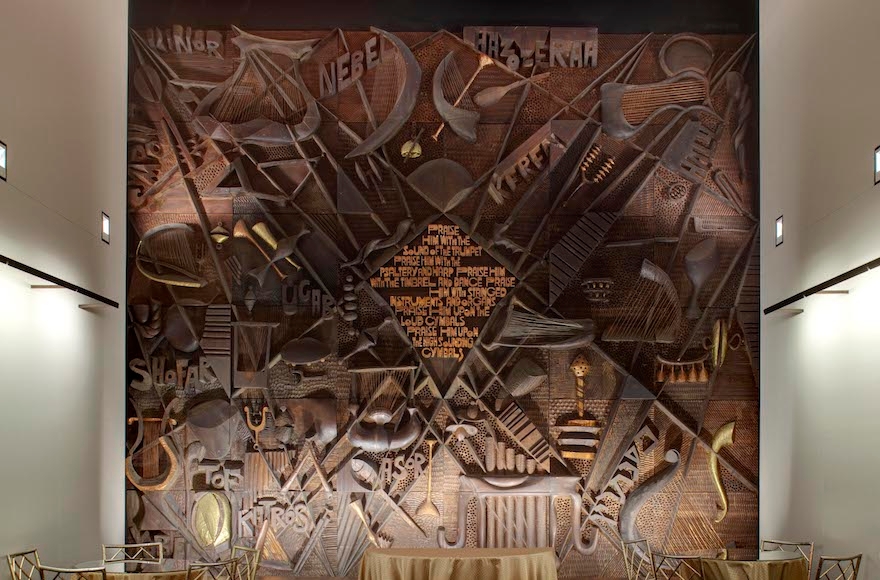 A view from the Israeli lounge within the John F. Kennedy Center for Performing Arts in Washington, D.C. (Alain Jaramillo)
Advertisement

WASHINGTON (JTA) — It’s like finding out that the White House has a mikvah in its basement and no one knows about it.

Up an elegant stairway next to the concert hall at The John F. Kennedy Center for the Performing Arts is the “Concert Lounge dedicated by the State of Israel.” It’s a delicate, quiet refuge from Washington that bursts with, well, Israeliness: Paintings and wooden reliefs feature biblical scenes by Israeli artists who were well known in their time.

Forty-seven years after it was inaugurated by Yitzhak Rabin in 1971, the lounge is about to get a makeover.

Mikhail Fridman, a Russian-Israeli philanthropist is offering $1.25 million through his investment shop, LetterOne, to renovate the lounge. The Kennedy Center opened up the redesign to a competition. Submissions were closed in April, and the center is now making a decision.

Not that anyone in the Israeli or pro-Israel community here was even aware that one of the most prestigious spaces — the lounge is used for receptions for donors to the National Symphony Orchestra — in one of the capital’s most prestigious landmarks is named for the country they love. 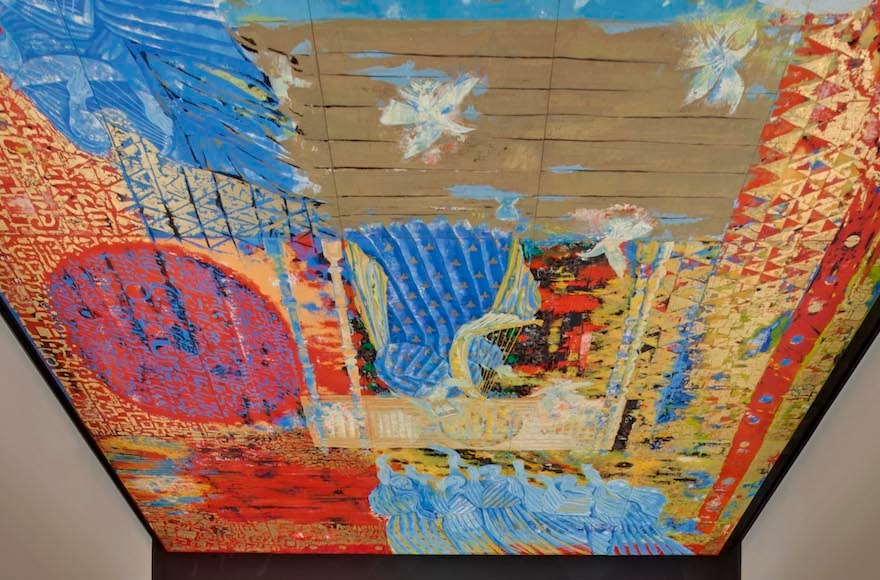 “I had forgotten about it,” said one leader of an organization known to plan major events in the capital.

“Never heard of it,” said another.

And so it went across the pro-Israel spectrum, with a dozen officials saying that maybe they had seen the lounge once, and others saying they weren’t even aware of it. (Remarks were mostly not for attribution, even for a topic as unpolitical as an Israeli lounge.)

Israeli Embassy spokespeople did not return a request for comment, but a former staffer recalled that the embassy was surprised by the lounge’s existence nine years ago when the Kennedy Center’s curators sought information about its artwork.

Step inside the huge double doors and you enter a tiny version — 60 by 20 feet — of the lively, elegant and perhaps dated spaces found in Israeli museums, event halls, government offices and the Knesset.

That’s not surprising, considering the architect of the lounge, Raphael Blumenfeld, designed the interior of the Knesset. Shraga Weil, whose painting of biblical scenes spans the lounge’s ceiling, sculpted the three main doorways to the Knesset. Nehemiah Azaz’s wooden sculpture depicting biblical musical instruments takes up a wall.

Rabin, the future prime minister who was Israel’s ambassador at the time, had an acute understanding of American sensibilities. He perceived the importance to Americans of the Kennedy Center, a modernist, layered white structure that would arise from the Potomac and still beloved among Washingtonians as the capital’s wedding cake. 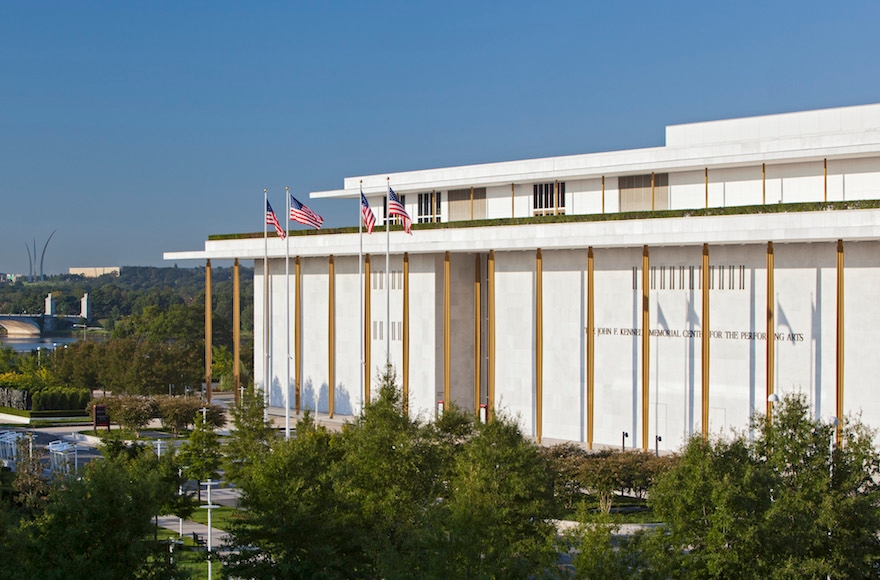 The John F. Kennedy Center for the Performing Arts is beloved to Washingtonians as the capital’s wedding cake. (Ron Blunt)

Sarit Arbell was the cultural attache at the Israeli Embassy nine years ago when the center called seeking information about one of the artists.

“I did a little research,” she said in an interview. “Rabin arranged it. He was so smart.”

The Kennedy Center opened just just eight years after President Kennedy’s assassination, recalling the idealism of the postwar period during an era riven by the Vietnam War and the Nixon presidency. Plenty of countries donated artwork to the Kennedy Center, but only one originated a lounge: Israel.

Its execution was a project not just of the Israeli government but of the Jewish community.

“The cost of the project is being borne in part by ‘Friends of the State of Israel’ in the Washington area,” JTA reported at the time. Blumenfeld said then it was “the first permanent exhibit of Israeli art outside of a museum.”

How did the lounge disappear out of the local Jewish consciousness?

It’s not clear, but the officials at pro-Israel groups who knew about the room’s existence said it was too small for receptions. It’s now used once a month for dinners for donors to the National Symphony Orchestra. On the day a reporter visited, schoolchildren were attending a concert in the hall, and the lounge was reserved for children with special needs who might need a break.

An actual Russian oligarch, Vladimir Potanin, paid to renovate the Russian lounge a few years ago, and now it appears light and airy: Plush white furniture is set against a massive abstract painting suffused with spring colors, green and blue.

A Kennedy Center spokeswoman told JTA that the Russian lounge previously resembled the Israeli lounge: darker and more solid, the prevailing interior art and architecture of the 1970s. The center would preserve the existing artworks, but Fridman said in a statement that he was looking for something more “dynamic.” The existing artwork would be preserved elsewhere in the Kennedy Center, the spokeswoman said. (Silk panels by Ezekiel Kimche were water damaged nine years ago and returned to his family.)

“When I first visited the Kennedy Center last spring, it was full of dynamic, creative energy,” Fridman said. “As an Israeli citizen, I thought it was important for the Israeli lounge to project that same dynamism, so that it can reflect modern-day Israeli culture as well as the incredible diversity of the Jewish heritage. We hope this competition can inspire a modern interpretation of the Israeli lounge.”

For some, though, it’s a stunning discovery, a sudden glimpse into a beloved far-off land.

Jeff Bernstein, a political science professor at Eastern Michigan University touring Washington, made a special trip to the Kennedy Center to get a glimpse and was disappointed to learn the lounge was closed for the duration of the concert for schoolchildren.