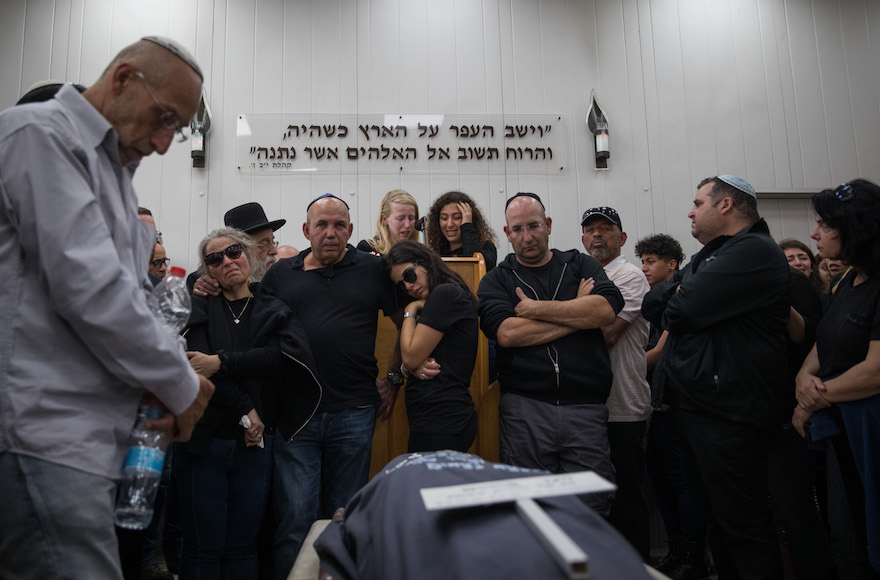 Family and friends at the funeral of 18-year-old Maayan Barhom at the Har Hamenuchot cemetery in Jerusalem, Friday, April 27, 2018. (Hadas Parush/Flash90)
Advertisement

(JTA) — The body of a missing Israeli teen was found overnight Thursday, bringing to 10 the number of teenage hikers killed by a flash flood during a hike in southern Israel.

Two Palestinian children also died from flooding in the West Bank, Haaretz reported, as the region has been lashed by intense spring rains.

The nine girls and one boy killed at Nahal Tsafit, south of the Dead Sea, were taking part in the Bnei Zion pre-army program. Three staff members, including the director of the trip, have been arrested for possible negligence, Haaretz reported.

Weather agencies had issued flood warnings for the region after unusually heavy rainfall on Wednesday.

Israel Television News reported that one of the girls killed had written text messages the day before Thursday’s trip saying she was worried about their safety.  “I can’t believe I’m actually going hiking in weather like this. It doesn’t make sense to go to a place that’s completely flooded. It’s tempting fate. We’re going to die – I’m serious,” the girl, 18, wrote on the messaging application WhatsApp.

Funerals for seven of the victims took place Friday, drawing thousands of mourners, the Times of Israel reported.

Sarit Or, the mother of victim Ella Or, said at her funeral in Ma’ale Adumim that organizers had assured her that the trip was safe.

“Our Ella, we came to say goodbye. Little girl, girl with so much energy and happiness,” she said. “They promised that everything would be okay and safe. But nothing is okay.”