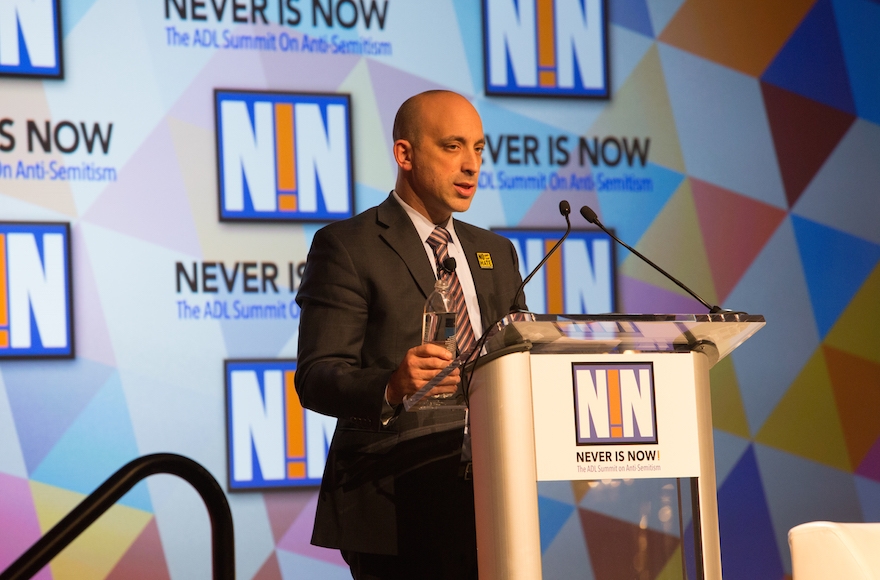 WASHINGTON (JTA) — The Anti-Defamation League said it regretted using “overly broad language” to describe the Canary Mission, a group that posts blacklists of what it says are anti-Israel students on campuses.

“We regret the overly broad language that we used to describe the Canary Mission in a tweet earlier this week,” an ADL spokesman said in an email Thursday evening after JTA asked the group to demonstrate where Canary Mission had deployed “Islamophobic & racist rhetoric,” as ADL had alleged in its tweet.

“It was wrong to apply those labels to a group working, like us, to counter anti-Semitism on campus,” the spokesman said, adding that it still backed some of the reservations expressed in an Op-Ed by pro-Israel university students, appearing in JTA, that decried Canary Mission’s tactics.

ADL retweeted that Op-Ed, which said Canary Mission, an anonymous group, uses “intimidation tactics, is antithetical to our democratic and Jewish values, is counterproductive to our efforts and is morally reprehensible.”

The students who signed the essay — including the Hillel governing or executive boards at the University of Michigan, University of Minnesota and The Ohio State University — said Canary Mission’s technique of publishing the personal information of students they deem anti-Israel has encouraged some student governments to hold votes on boycotting Israel in secret session.

“We view much of the rhetoric employed to villainize these individuals as hateful and, in some cases, Islamophobic and racist,” the Op-Ed said, but did not give examples of racist or Islamophobic language used by the group. The authors did not reply to a query from JTA to elaborate.

On April 24, ADL had retweeted the Op-Ed,  echoing the essay’s terminology. “Thank you to @umich student leaders for exposing Canary Mission’s Islamophobic & racist rhetoric as ‘antithetical and destructive to supporting Israel and eliminating anti-Semitism on campus’,” the Tweet said.

Thank you to @umich student leaders for exposing Canary Mission’s Islamophobic & racist rhetoric as “antithetical and destructive to supporting Israel and eliminating anti-Semitism on campus.” https://t.co/KLbAzPE0XN

ADL walked that back on Thursday.

“We reiterate our support for the University of Michigan students who have expressed valid concerns about Canary Mission’s impact on student-led efforts to advocate for Israel,” the ADL spokesman said. “We understand that the Canary Mission’s approach and its tactics on campus might not be the preferred approach of many students. We believe that all parties involved in this situation want the same outcome so we encourage them to find ways to work together to fight anti-Semitism and to support the needs of Jewish students.”

On Thursday, the Zionist Organization of America criticized the ADL for calling Canary Mission Islamophobic and racist. The right-wing ZOA praised the Canary Mission for “truly fighting antisemitism on US college campuses.”

Canary Mission accepted the ADL statement of regret. “Fighting anti-Semitism is a responsibility on us all,” the group saidn in an email to JTA. “The ADL rightly corrected a wrong and we only wish for their success in fighting anti-Semitism, BDS and other forms of anti-Jewish hatred. Now lets all get back to the mission of fighting anti-Semitism on the far right, far left and among anti-Israel activists.” BDS is short for the Boycott, Divestment and Sanctions movement targeting Israel.

This week, Hillel International — the umbrella body for the campus Jewish associations — shared the Op-Ed through social media. In an accompanying statement, it appeared to share some of the concerns about Canary Mission expressed by the local chapters.

“Respectful dialogue and disagreement is at the core of the legacy of our organization’s namesake, and is a value we seek to model on college campuses everywhere,” Hillel said. “Therefore, Hillel does not engage in or support personal attacks on students who support BDS or other Israel delegitimization efforts with which we disagree. We appreciate the student leaders who have raised this important issue amongst their peers and we are working with them to find opportunities for them to share their concerns with the broader Jewish community.”

Other groups and academics have described Canary Mission’s techniques as “McCarthyite.” In 2016, eight Judaic studies professors and pro-Israel activists — including Kenneth S. Stern,  the  executive director of the Justus & Karin Rosenberg Foundation, and Deborah Dash Moore, professor of history and Judaic studies at the University of Michigan — wrote an essay charging Canary Mission with tarring students as anti-Israel or anti-Semitic based on scant evidence; holding students forever accountable for statements or positions they have taken as youths; and inhibiting academic freedom and free expression on campus.