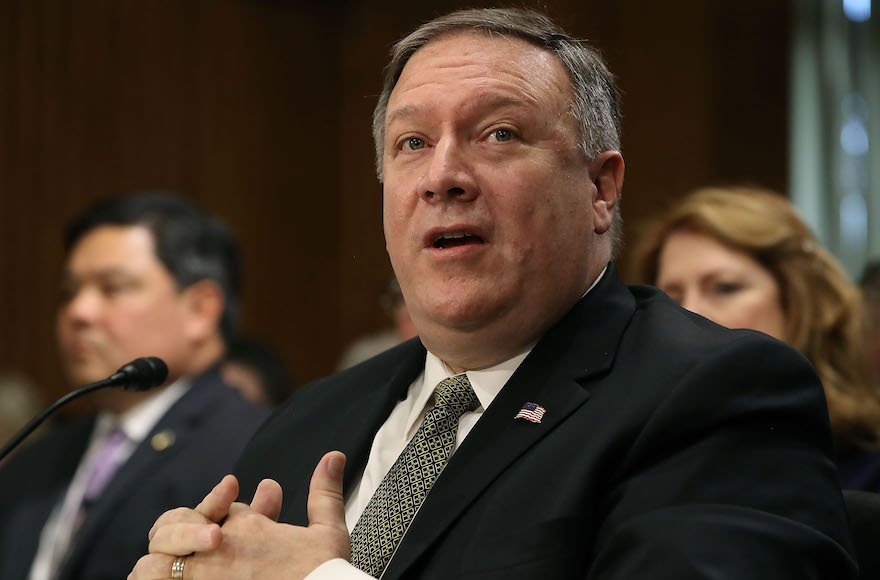 (JTA) — Newly confirmed Secretary of State Mike Pompeo will stop in Israel during a trip that began Friday, one day after the Senate approved his nomination by a vote of 57 to 42.

State Department spokeswoman Heather Nauert said Thursday that Pompeo will be leaving today for an overseas trip that will include meetings with NATO officials in Brussels and stops in Saudi Arabia, Israel and Jordan.

“[W]e’ll head to Israel, where our relationship has never been closer than it is right now with that country,” said Nauert. “There, the Secretary will meet with Prime Minister Benjamin Netanyahu.”

Asked why the Middle East had been chosen for his first trip abroad, Nauert said it was “because of the importance of these key allies and partners in the region and all the events going on in the world today.”

The Anti-Defamation League and the American Jewish Committee both congratulated Pompeo on his confirmation Thursday. Both urged the former CIA director to appoint a Special Envoy to Monitor and Combat Anti-Semitism, a post that has remained vacant since the end of the Obama administration; the ADL also urged the appointment of a “Special Envoy for the Human Rights of LGBTI persons.”

The ADL statement also reiterated reservations about Pompeo that Senate Democrats raised before and during his confirmation hearing, including “his past anti-LGBT and anti-Muslim statements and his close associations with organizations that have frequently expressed hostility to Muslims.”