Nazi symbols and salutes on display at Ukrainian nationalist march 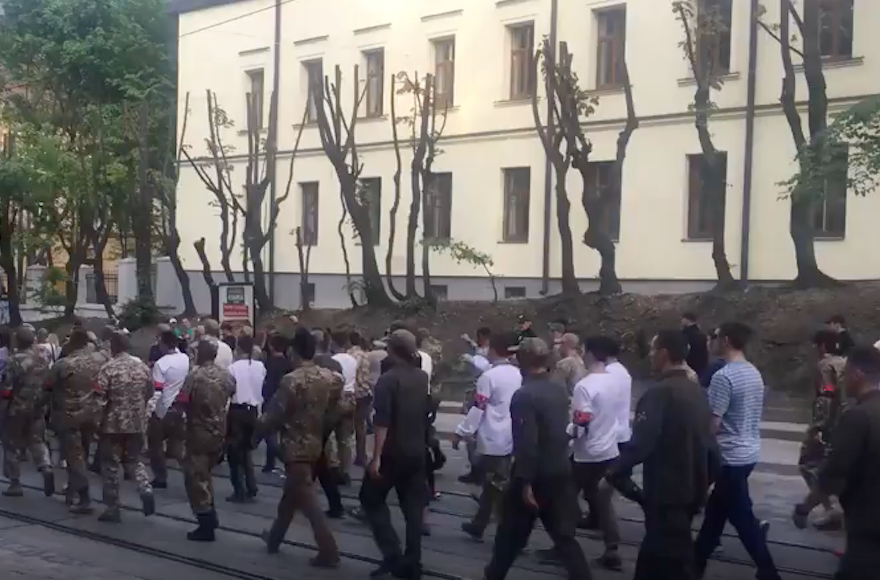 A view of some of the marchers in Lviv, Ukraine(Screenshot from YouTube)
Advertisement

(JTA) — Hundreds of people in the Ukrainian city of Lviv attended a nationalist march featuring Nazi symbols that commemorated a Waffen SS unit with many local volunteers.

Eduard Dolinsky, director of the Ukrainian Jewish Committee, condemned Saturday’s march honoring the 14th Waffen Grenadier Division of the SS, or the 1st Galician, as “a scandalous event that should not be allowed to happen in Ukraine in which murderers of Jews and others are glorified.”

Andrew Srulevitch, the director of European affairs at the Anti-Defamation League, on Twitter wrote on Sunday that “Ukrainian leaders need to condemn such marches, where Ukrainian extremists celebrate Ukrainian Nazi SS divisions (1st Galician), giving Nazi salutes in uniform in the middle of a major Ukrainian city.”

The march was held on the 75th anniversary of the 1st Galician’s establishment under Nazi auspices. It was organized by an umbrella of nationalist organizations known as the National Corps of Lviv Region, the Zaxid news website reported. In addition to the Waffen SS symbols, dozens of participants at the march carried posters featuring the 1st Galician’s symbol.

In the western Ukrainian city of Ternopil, located 70 miles east of Lviv, a monument commemorating the Holocaust was set on fire Thursday. It stands where thousand Jews were brutally murdered by Nazis and local police. Footage from a security camera shows a man approaching rapidly, hurling a firebomb at the monument and running away as the object burns. The same monument has been targeted three times since 2017.

Also last week, in the town of Poltava, in eastern Ukraine, a swastika and the words “heil Hitler” were spray-painted on a monument for Holocaust victims. The vandals, who have not been identified, also wrote “Death to the kikes.”

Some 70 miles northeast of Ternopil, in Ostroh, Jewish pilgrims on Friday found the gravesite of Rabbi Shmuel Eliezer Eideles, a 17th century luminary, had been vandalized, according to Hamodia.

In Odessa, a large graffiti reading “Jews into the sea” was written on the beachfront wall of a hotel.

These incidents and the march coincide with reports in the Ukrainian media of a letter signed by 57 U.S. congressmen condemning what they called Ukrainian legislation that “glorifies Nazi collaborators.” The letter, the harshest public rebuke in years of Ukraine’s anti-Semitism by U.S. elected officials, also says that the world is seeing a “rise of this hateful ideology.”

In Ukraine, a revolution in 2013 that ended the rule of a key Kremlin ally ushered in a wave of nationalism that coincided with what Israeli researchers of anti-Semitism in January called a massive increase in anti-Semitic incidents amid government inaction.

The glorification of fighters who allied with the Nazis against Russian domination increased considerably in volume after 2013. In 2015, the Ukrainian Parliament passed a law that criminalizes denying the “heroism” of some of these allies of Nazi Germany, which oversaw the near annihilation of the region’s Jews.