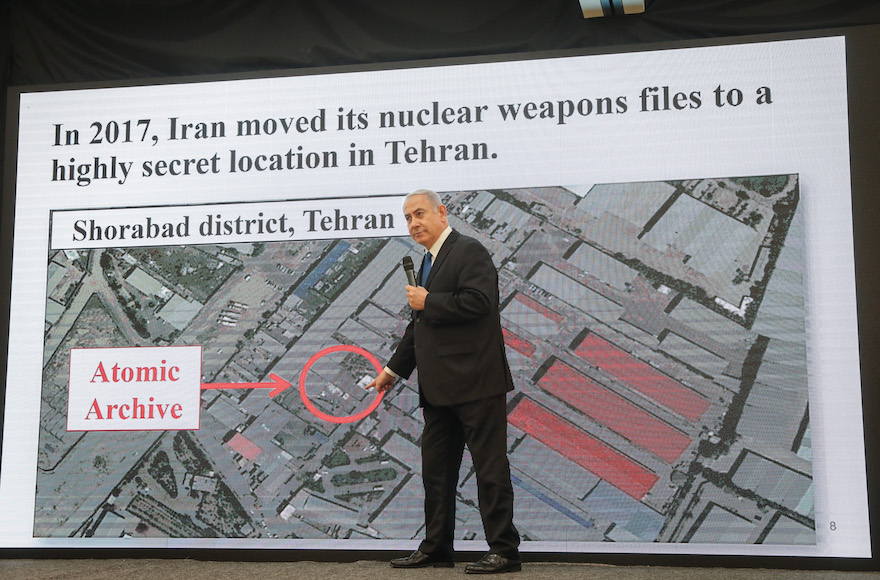 Netanyahu on Monday evening unveiled copies of half a ton of material that make up part of what he identified as Iran’s secret nuclear files. He first delivered his presentation in English in an effort to reach the widest possible audience.

The files, which the Israeli leader calls “new conclusive proof of Iran’s secret nuclear weapons program,” include 55,000 pages of information and 55,000 files on 183 CDs. He said the files had been stored in a secret atomic archive in Tehran, where it was moved last year, locked in massive safes. The original materials, Netanyahu said, “are now in a very safe place.”

Netanyahu did not appear to present evidence of ongoing nuclear activity in violation of the deal signed in 2015 between Iran and six world powers, which traded sanctions relief for a rollback of Iran’s nuclear program.

President Donald Trump is set to decide by the middle of next month whether it will remain in the Joint Comprehensive Plan of Action, as the deal is known.

Among the documents, Netanyahu said, is proof of the existence of Project Amad, a program to design, build and test nuclear weapons. The program was scrapped in 2003 after the Gulf War, but work continued in other guises and with the same personnel, according to Netanyahu, citing the documents. Other documents also proved that the Fordow uranium enrichment facility was not intended to produce medical isotopes but uranium for nuclear weapons.

“Iran is brazenly lying when it says it never had a nuclear weapons program,” Netanyahu said.

Netanyahu said he is certain that Trump will “do the right thing” in deciding whether to stay in the nuclear deal.

Reactions were mixed to Netanyahu’s address, with many nuclear experts saying the intelligence confirmed what had been known when the nuclear deal was signed.

“[W]hen Iranian officials claim — as they often do — that Iran [never had] a nuclear weapons program, they were lying,” James Acton, co-director of the nuclear policy program at the Carnegie Endowment, tweeted. “But, we knew that already. The JCPOA was designed on that basis.”

Opponents of the Iran nuclear deal said it confirmed that Iran cannot be trusted.

Conservative commentator Ben Shapiro wrote that the documents demonstrate “that the Obama administration lied constantly and repeatedly to the public about Iran’s newfound moderation in order to scam the public into approving Obama’s Iran nuclear deal – a deal that allowed Iran to maximize its regional power with income from the West.”