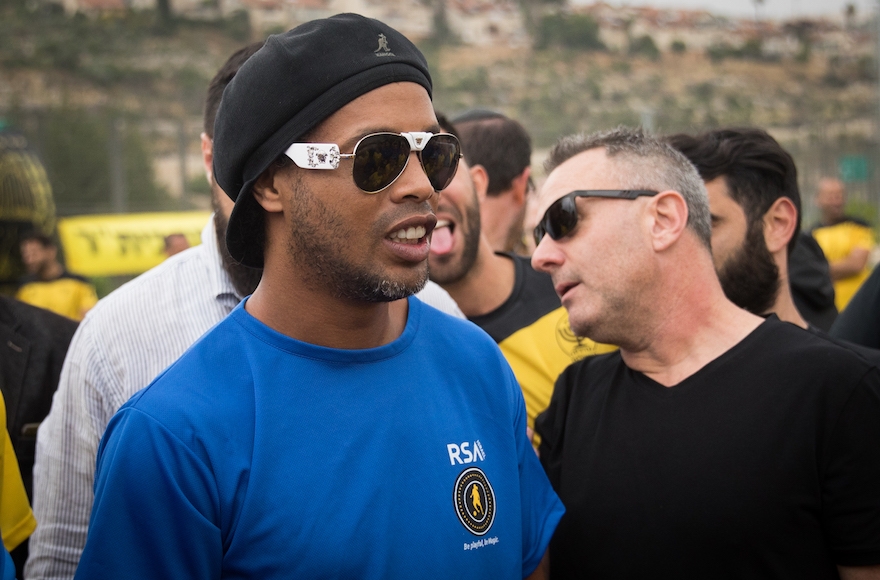 RIO DE JANEIRO (JTA) — The Brazilian soccer idol Ronaldinho has launched a soccer school in Israel aimed at both native-born and immigrant children and youths.

Ronaldinho, who spent last week in the Jewish state, announced Thursday the establishment of the Ronaldinho Soccer Academy for children aged 6 to 16. The goal is to combine the passion and fun of Brazilian soccer with a strong teaching methodology and friendship values.

The school will launch in the summer as a camp for some 100 youths before opening in September.

“I am very excited to help Israeli children of all faiths raise their game to the highest levels,” Ronaldinho said at a news conference. “I see the school as a first-class educational tool that helps in acquiring skills, tools for life, discipline, teamwork and more. Israel has a tremendous potential, countless talents and a great love for the game.”

The Christian athlete recently affiliated himself with an evangelical political party in Brazil, so opening a school in the Holy Land is a special excitement.

The project was established in cooperation with the Beitar Nordia Jerusalem soccer team along with local partners.

“Our mission is to bring new values to Israeli children and make the sports they are passionate about collaborate in their upbringing, promoting well-being, health, compliance and social engagement,” Mauro Rozenszajn, the Brazilian-born CEO of the new academy, told JTA. “Teachers will be cordial and patient educators.”

Ronaldinho, 38, had a full agenda while in Israel. The former soccer star visited the Beitar Nordia facilities, participated in a match with Israeli players, and visited Raanana, the city with the largest Brazilian community in the country, where he broadcast a table soccer game on Instagram.

“Soccer is the most aggregating activity in the world,”  Rozenszajn said. “Israel has many children coming from abroad. We want to bring joy to these children and their parents, and help them have a ‘klita kala,’ an easy integration,”

Ronaldinho is often considered one of the greatest players of his generation and regarded by many as one of the greatest of all time. Throughout his playing career, he accumulated numerous honors, including the FIFA World Player of the Year award twice and a Ballon d’Or. Ronaldinho played 97 matches for the Brazil national team, scoring 33 goals and representing his country in two FIFA World Cups.