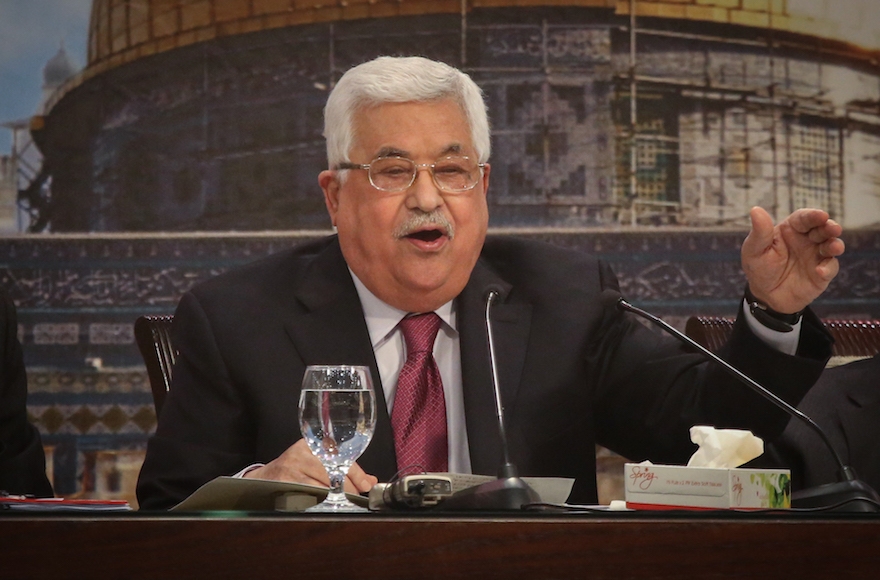 Speaking Monday in the West Bank city of Ramallah, Abbas also said that Jews do not have a historical connection to the land.

“Israel is a colonial project that has nothing to do with the Jews,” he told the Palestinian National Council, and the “Europeans wanted to bring the Jews here to preserve their interests in the region.” His speech was quoted by the Times of Israel and other news agencies.

The council is the legislative body of the Palestine Liberation Organization and elects the PLO’s Executive Committee, which makes decisions on all Palestinian issues — in Israel, the West Bank and around the world. New members are expected to be elected to the council during its four-day meeting that began Monday.

Abbas, who called his speech a “history lesson,” also invoked an agreement whereby Adolf Hitler facilitated the immigration of Jews to Israel. In that short-lived arrangement, over 60,000 German Jews immigrated to Palestine during the 1930s, according to the U.S. Holocaust Memorial Museum. While Holocaust deniers say the agreement showed collaboration between the Nazis and Zionist leaders, Holocaust historians like Deborah Lipstadt and Rainer Schulze say it was a narrow, cynical agreement on the Nazis’ part, agreed upon by a Zionist group in an attempt to save as many Jews as possible at a time of increasing German persecution.

Abbas also said that most of Europe’s Jews thought their money was more important than their lives because they stayed put.

Abbas has already faced accusations of Holocaust denial based on his 1982 doctoral dissertation titled “The Other Side: The Secret Relationship Between Nazism and Zionism.” The dissertation said the 6 million Jews killed in the Holocaust is a grossly inflated figure and that the “Zionist” leadership cooperated with the Nazis.

Abbas reiterated that he would not accept an American peace deal in the wake of the Trump administration’s decision to recognize Jerusalem as the capital of Israel and to move its embassy to Jerusalem from Tel Aviv later this month.

“Laden with a historical and pseudo-academic assertions, the Palestinian President’s latest diatribe reflects once again the depth and persistency of the anti-Semitic attitudes he harbors,” the ADL’s CEO, Jonathan Greenblatt, said in a statement. “With public speeches like these, it is not surprising that under Abbas’ leadership, the Palestinian Authority has failed to renounce and combat Palestinian anti-Semitic incitement, including narratives that Jews are to blame for the Holocaust and other anti-Semitic persecution, and which deny or diminish the millennial Jewish presence in and connection to the Land of Israel.”

J Street also condemned the remarks that it said “featured absurd anti-Semitic tropes and deeply offensive comments on the history of the Jewish people and Israel.

“There is absolutely no excuse for this kind of incendiary rhetoric. With diatribes like this, President Abbas only undermines the legitimate aspirations and concerns of the Palestinian people, and distracts from the need for international action to help alleviate the crisis in Gaza and advance the two-state solution,” the statement also said.