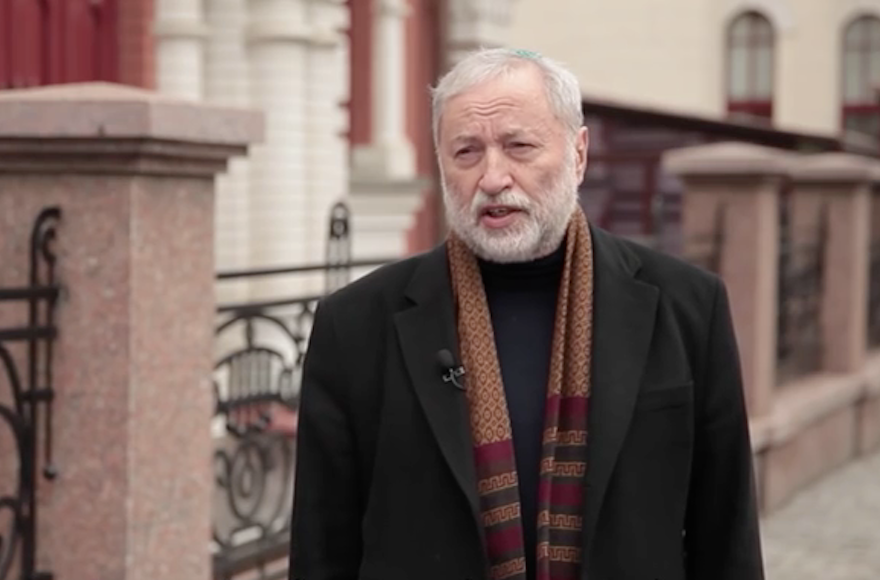 (JTA) — A Ukrainian Jewish leader’s claim that  Russians manipulated U.S. lawmakers into criticizing his country triggered angry reactions and denials by other Jewish community leaders in the region.

Josef Zissels, in an interview with the state-run National News Agency of Ukraine, or Ukrinform, was critical of a statement signed by more than 50 U.S. Congress members condemning recent Ukrainian legislation that they said “glorifies Nazi collaborators.”

Zissels, chairman of the Vaad Association of Jewish Organizations and Communities of Ukraine, suggested that letter was part of an orchestrated campaign that was possibly paid for by Russia.

“It is quite obvious who needs to discredit Ukraine in the United States, and why,” he said, in what many took as a thinly veiled reference to Russia. “I know of several [lobbying] firms that are accredited at Congress and can promote anything for money there. So to collect the necessary number of signatures for them is not a problem.”

Following Zissels’ remark, the Euro-Asian Jewish Congress, or EAJC, which is the World Jewish Congress’ affiliate in Russian-speaking countries, said it would kick Vaad out of its list of member groups.

“Mr. Zissels’ unfounded allegations, which are only the latest in a series of inappropriate statements of a member delegate of the EAJC, are intolerable,” a spokesman for the group said. The EAJC spokesman added that EAJC delegates from several countries complained about Zissels’ support for nationalists in Ukraine amid reports of rising anti-Semitism there. Zissels has disputed these reports.

In Ukraine, hostility to Russia has given rise to laws and state-sponsored gestures venerating allies of Nazi Germany who fought the Soviet Union in World War II. In Lviv last week, hundreds of people marched, many carrying Nazi symbols, in celebration of a Waffen SS unit with many local volunteers.

Dozens of U.S. lawmakers, in a letter sent last week to Deputy Secretary of State John Sullivan, condemned such legislation. The letter, the harshest public rebuke in years of Ukraine’s anti-Semitism by U.S. elected officials, also said that the world is seeing a “rise of this hateful ideology” in reference to neo-Nazism.

Zissels dismissed it as contrived, saying some congressmen who signed on may not have read the letter.

“Most of them can’t even find Ukraine on the map,” he said.

Vyacheslav Likhachev, an expert on anti-Semitism who is affiliated with Zissels’ Vaad group, said Zissels never asserted that the U.S. lawmakers’ letter was “ordered by a lobby group,” but merely said “it is possible.” Zissels’ reaction to the letter was a “defense against anti-Ukrainian defamation,” Likhachev, head of Ukraine’s National Minority Rights Monitoring Group, added.

Zissels said his organization had resolved to leave EAJC months ago, accusing it of “breaking of geopolitical neutrality,” as Zissels called it.

An EAJC spokesman said the group’s commitment to political neutrality is at the heart of the decision to disassociate from Vaad, “which seems to have been hijacked to serve Mr. Zissels’ nationalist agenda.”