In historic first, Giro d’Italia race kicks off in Israel 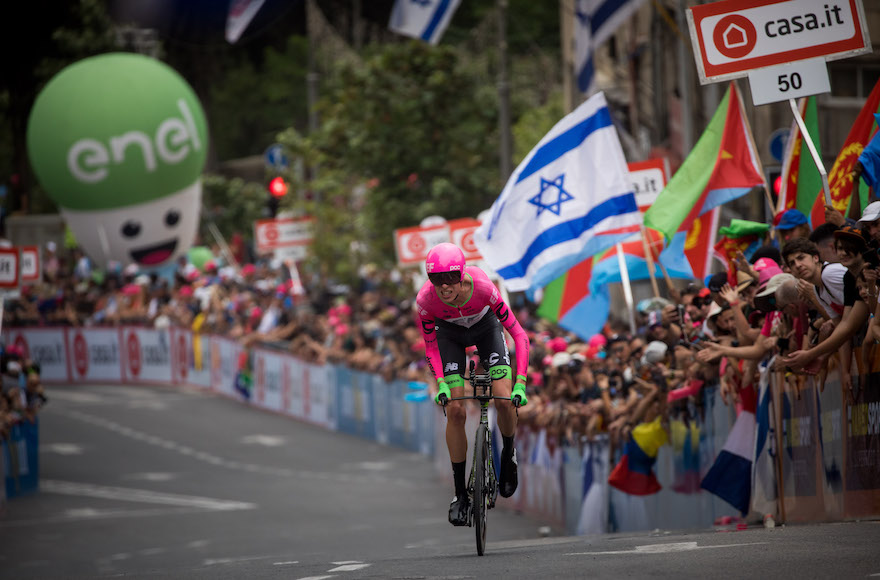 Hundreds of fans and supporters cheering as the Giro D’Italia, one of the most prestigious road cycling races in the world, begins in Jerusalem, May 4, 2018. (Yonatan SIndel/Flash90)
Advertisement

(JTA) — The Giro d’Italia kicked off in Israel, the first non-European country to host large segments of the bicycle race in its 101 years in existence.

The 2018 Giro, whose coming to Israel is the initiative of the Canadian-Jewish businessman Sylvan Adams, will go on for three weeks, ending in Rome. In Israel, the race’s 22 teams of 176 riders on Friday began with a 6-mile time trial in Jerusalem, a 103-mile race from Haifa to Tel Aviv and a 140-mile race from Beer Sheva to Eilat. Over the weekend, major traffic arteries throughout Israel, including its coastal road, will be blocked for the race.

Along with the Tour de France and Spain’s Vuelta, the Giro is one of the world’s three major cycling tournaments.

The teams listed on the Giro’s website as competing hail from 13 countries, including one team from Israel, three from the United States, another three from Italy and two from France. Bahrain and the United Arab Emirates also sent teams although those countries have no official diplomatic relations with Israel. Also competing is a team from South Africa, whose ruling party supports a blanket boycott of Israel.

The predominantly-Muslim nation of Kazakhstan is also represented, along with the United Kingdom, Germany, Belgium, Spain, Switzerland, the Netherlands and Australia.

According to the Israel Broadcasting Corporation, Adams spent nearly $20 million in facilitating the Giro’s arrival to Israel. The Israeli government spent another $8.3 million. Some 1,500 media professionals will be covering the Giro in Israel, according to the report. Last year, some 840 million people worldwide saw parts of the race on television, it also said.

The Boycott, Divestment and Sanctions movement against Israel has appealed the Giro organizers not to come to Israel, comparing what they terms its “military occupation” of Palestinians to apartheid in South Africa.

“I believe BDS is a very small movement, they don’t interest me and they don’t scare me at all,” Adams said. “This is the antidote to BDS, this is showing ourselves to a billion television viewers.”

Adams, a cycling enthusiast who moved to Israel two years ago, also said he sees special symbolism in the race’s terminus of Rome, the seat of an empire whose army nearly 2,000 years ago destroyed the Temple in Jerusalem after quelling a Jewish rebellion for sovereignty.

“And 2,000 years later, we’re friends with the Romans, the Giro d’Italia comes here,” he said. The race’s sponsors in Italy changed the end of the route exceptionally, making Rome its final destination instead of Milan “to express the symbolism,” Adams said.