Why the band Haim means so much to young Jewish women 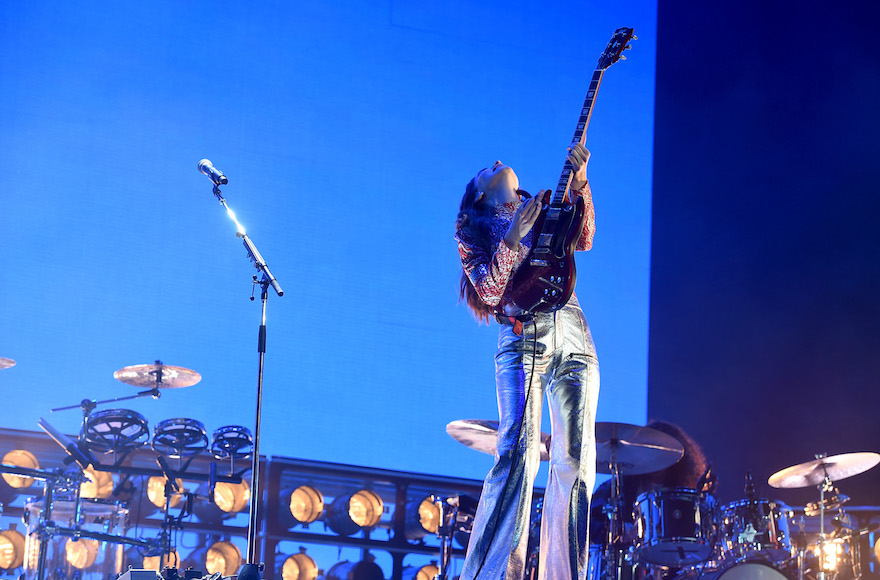 NEW YORK (JTA) — On Friday, Zoe Plotsky and 10 friends will come together for a casual Shabbat dinner at a Greek restaurant near Radio City Music Hall in Midtown Manhattan. They will make a toast, break pita bread (instead of challah), share something they were grateful for from the previous week, eat and probably have a few drinks.

Then they will head over to Radio City to see their secular Jewish idols: the sisters of the pop rock band Haim. It will be the band’s first of two sold-out shows at the venue this weekend. Plotsky is dubbing her Shabbat meal “L’Haim.”

Sold-out concerts aren’t that new for Haim. Since releasing their first singles in 2012, the band has sold hundreds of thousands of albums, floored critics, toured the world with good friend Taylor Swift and become fashion icons of sorts. Their sound, which blends confident ’70s and ’80s pop with funky guitar lines and sleek contemporary beats, is irresistible. One could argue that Danielle (lead vocals and guitar), Alana (backup vocals, guitar and keyboard) and Este (bass and backup vocals) are the coolest Jews on the planet right now, occupying a coveted space between the indie music world and the realm of international megastars (such as Drake, for example).

The music video for the lead single on Haim’s second album, “Want You Back,” is basically an advertisement of the band’s coolness: The sisters are seen strutting down Ventura Boulevard in Los Angeles in time to the song, occasionally breaking out into dance moves.

But for Plotsky, 25, and many of her not very religious Jewish millennial peers, the Haim sisters, who hail from Southern California’s San Fernando Valley, remain incredibly relatable.

Part of their widespread appeal stems from the approachable, laid-back personas they have cultivated — they prefer T-shirts, jeans and skirts to the lavish costumes worn by Lady Gaga, Beyonce and Katy Perry (see the “Want You Back” video). But there’s another factor: They stand out as recognizably Jewish-looking women.

“I could be them, except that I can’t sing,” Plotsky told JTA. “They’re like an extension of my personality … I am also a long curly-haired Jewish girl from the valley you kind of look at and know that I’m Jewish.”

Meredith Bilski, 26, who works for the food video company Tastemade, said she got goosebumps the first time she heard Haim’s music in 2013. She has since seen them live four times.

“I knew that with a name like Haim, they had to be Jewish,” Bilski said in an email. “I even remember arguing with my non-Jewish friends about how they pronounced their name — there was no way it could be ‘Hey-m.’”

For the record, the sisters say their name — Hebrew for “life” — rhymes with “time,” and without the throat-clearing pronunciation of the Hebrew original. 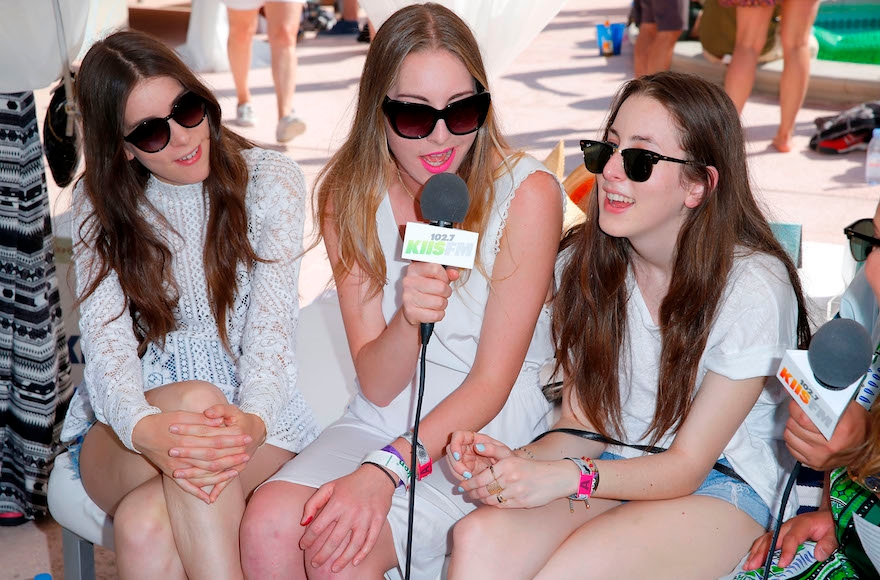 Bilski found the band’s Jewishness empowering the first time she saw them in concert.

“I didn’t realize there was a void in Jewish representation in mainstream music today until I saw them live for the first time at Lollapalooza 2013,” she said. “My dad and I have always bonded over music — he taught me the power of Zeppelin, The Beatles, [Neil] Young and Clapton — and I remember feeling the need to call him at that very moment to say ‘Dad! There’s this sister trio who can shred — and they’re Jewish!’ I had never experienced this sort of representation in the music world as a Jewish woman — apart from Barbra Streisand and maybe Pink — and it was exhilarating. If my sisters and I were musically inclined (we’re not), it could have easily been us.”

Stephanie Berman, 31, who lives in Los Angeles and works for an event services company, thinks it’s important to have Jewish pop culture icons to look up to — even if she might feel even more love for Abbi Jacobson and Ilana Glazer, the Jewish women behind Comedy Central’s hit show “Broad City.”

“Since there are not a lot of Jewish musicians that I know of, it is really cool to have these awesome chicks that make good music, and just have that commonality with them,” Berman said.

Plotsky and Berman belong to the demographic that Jewish organizations hanker to bring into the organized fold — especially since a Pew Research Center study set off alarms about the high Jewish intermarriage rate in 2013, the year Haim’s debut album happened to come out. (Bilski doesn’t identify with a specific denomination but attends a Modern Orthodox minyan.)

It only helps Haim’s popularity with this demographic that they have a solid (if not religious) Jewish backstory. Their father, Mordechai, or Moti, played soccer professionally in Israel before moving to Los Angeles. They have publicly stated their love for Israel, and how they grew up listening to Ofra Haza, the “Israeli Madonna.” They told one publication that their first concert was at Canter’s, a Jewish deli in L.A., and that they were paid in matzah ball soup. They’ve joked that their band name was almost “The Bagel Bitches.”

Plotsky works for OneTable, an organization that helps millennials throw and attend hip Shabbat dinners (she is throwing the “L’Haim” dinner on her own, not as a professional). She doesn’t keep kosher or call herself “observant,” but she has found a way to connect to Judaism through her own Friday night ritual. 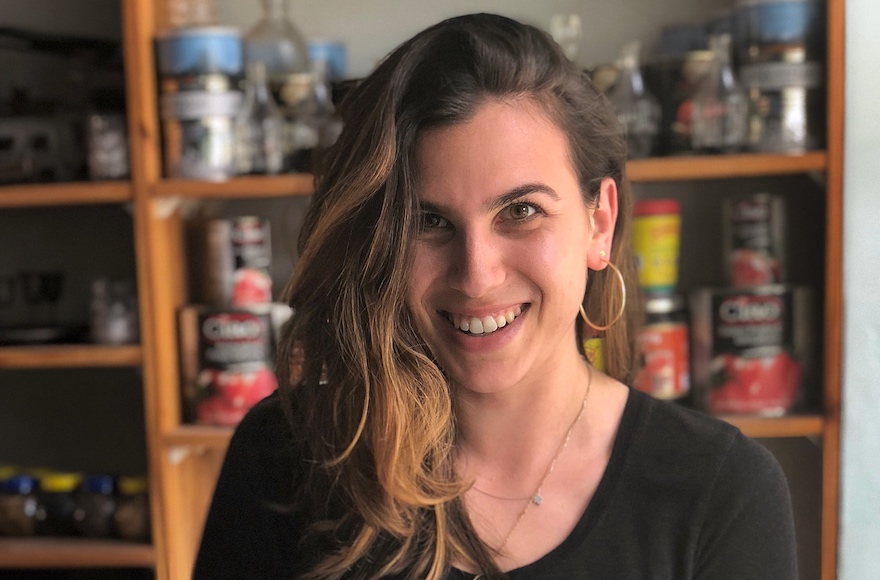 Zoe Plotsky identifies with Haim, saying “I could be them, except I can’t sing.” (Seth Marcus)

“Weeks as a young professional in New York are kind of crazy,” she said. “Shabbat is an interesting time to create a ritual outside of, let’s say, posting a photo of my food [to Instagram]? But really, recognizing the week is over, let’s be grateful for that for a moment and move on.”

Berman celebrates Jewish holidays with her family, but doesn’t practice much besides that.

But not all of Haim’s Jewish fans are secular. For instance, Carly Amon, 22, who works at a health care startup in Washington, D.C., attended Jewish day school through eighth grade and still keeps kosher. She first heard Haim’s music a couple of years ago.

“I only found out later they were Jewish,” she said. “I definitely feel prideful listening to them now!”