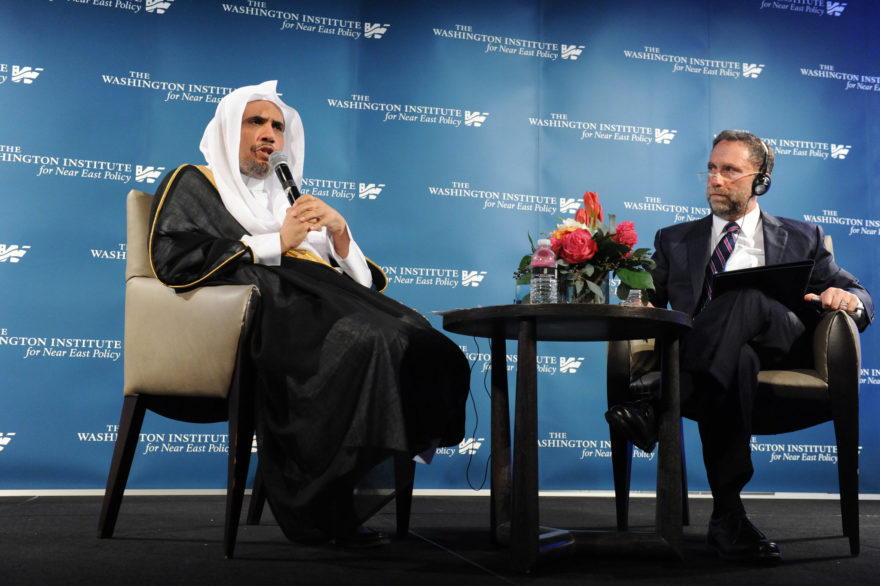 Mohammed al-Issa, the head of the Muslim World League, speaks Thursday May 3 2018 with Robert Satloff, the director of the Washington Institute for Near East Policy, in Washington DC. (Courtesy TWI/Lloyd Wolf).

WASHINGTON (JTA) — The leader of a Saudi-based Muslim group decried those would blame Jews for the Holocaust, days after Palestinian Authority President Mahmoud Abbas came under international censure for doing so.

Mohammad Al Issa, the secretary general of the Muslim World League, said that blaming the Jews for the Holocaust was akin to denying the Holocaust, a phenomenon he denounced earlier this year.

“To reduce the importance of this disaster by saying excuses that would make us look away from this disaster, is a continuation of the denial of the criminality of this incident, this crime against humanity,” Al Issa said Thursday at an event organized by the Washington Institute for Near East Policy.

Al Issa, who made headlines in January when he denounced Holocaust denial, had been asked by Robert Satloff, the Washington Institute’s director, whether he would also condemn those who blame Jews for the Holocaust.

Neither Satloff nor al-Issa mentioned Abbas. The Palestinian leader on Friday apologized “if people were offended” by his speech earlier in the week, when he said the behavior of Jews, including “their function in society, which had to do with usury, banks, and so on,” led to massacres, including the Holocaust.

Satloff also asked al Issa what he thought of suicide bombers who target civilians, a tactic once identified closely with the Hamas terrorist group and its attacks on Israelis.

He said Islam opposed “attacking civilians anywhere on this earth.”

A former justice minister, Al Issa had taken over the Saudi-funded Muslim World League in 2016, and his leadership of the once-strident group appears to be of a piece with Saudi Arabia’s pivot westward under its new crown prince, Muhammad bin Sultan.