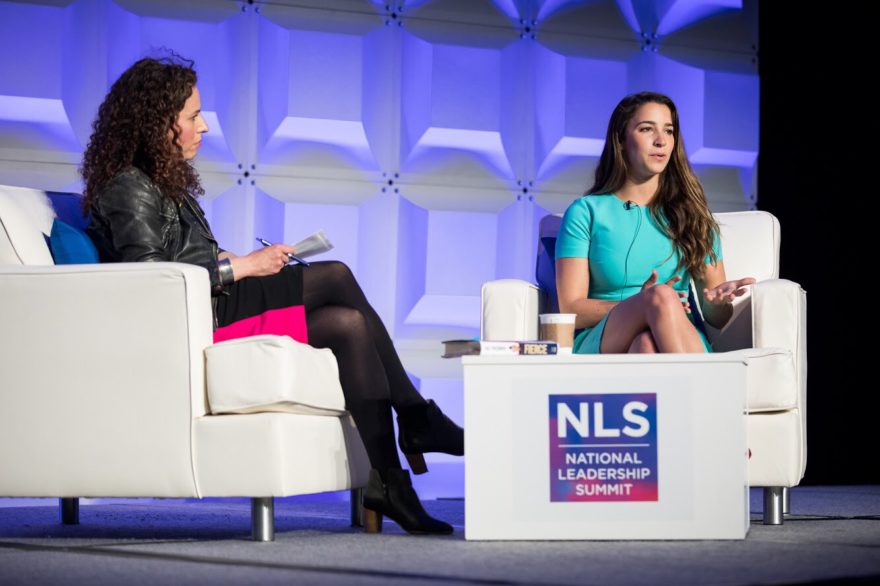 Gymnast Aly Raisman speaking with journalist Sarah Wildman at the ADL national conference in Washington, D.C., May 6 2018. (Courtesy of the ADL)
Advertisement

WASHINGTON (JTA) — Officials responsible for U.S. gymnasts have failed to oust the enablers who allowed the team doctor to molest dozens of athletes, Aly Raisman told the Anti-Defamation League.

“We’re not having a full investigation of who knew and who didn’t know, and that’s a big problem,” Raisman said Sunday at the opening of the Anti-Defamation League annual leadership conference. The theme of the conference this year is “my good fight,” and is dedicated to underrepresented voices taking on discrimination, hate speech and violence.

Raisman, who is Jewish and the winner of numerous Olympic medals, including several golds, in March sued the U.S. Olympic Committee and USA Gymnastics alleging negligence for not stopping former U.S. Olympics gymnastics team doctor Larry Nassar from sexually abusing young athletes. Nassar was sentenced earlier this year to 40 to 175 years in prison for molesting over 150 women and girls over two decades.

Raisman spoke onstage in an interview with Sarah Wildman, the deputy editor of Foreign Policy who last year in an essay described her experience with sexual harassment as a young journalist.

Raisman, 23, described a culture that enabled Nassar, allowing him to groom the gymnasts he was supposed to care for. Nassar was the official the gymnasts turned to if they felt ill, if they needed comforting or if they were hungry. She said it is now clear in real time that some officials were aware of the abuse.

“The fact that no one pulled us aside and didn’t talk to us is a huge red flag, those people need to be gone and some of those people are still there,” Raisman said.

Raisman faulted USA Gymnastics for a lack of transparency, noting that three board members resigned in January without explanations why. “Who’s picking the new board members?” she asked. “They’re not asking survivors to help out.” She said that the authorities should delve decades past to uncover how Nassar was able to get away with molesting victims believed to number in the hundreds.

“We need to look at every single year and figure out why this was ignored,” she said.

Both the USOC and USA Gymnastics have rehauled their leadership in the wake of the scandal. The USOC has not commented on Raisman’s lawsuit. USA Gymnastics said at the time that it first learned of Nassar’s abuses in 2015, when it reported him to authorities.

Raisman’s remarks at Nassar’s sentencing hearing earlier this year drew national attention. Speaking to the ADL, she said she nearly didn’t speak at the hearing because the prospect was so traumatic. She said she drew upon her training as a gymnast, when she learned how to ignore the crowds and the cameras and focus on her game, and wrote her 13-minute speech at the last minute.

She did not feel relief after the hearing, she said. “I felt awful. I felt sick.” She said she still often feels overwhelmed recounting her experience, and has taken up meditation as a means of self-calming. “It helps so much,” she said.