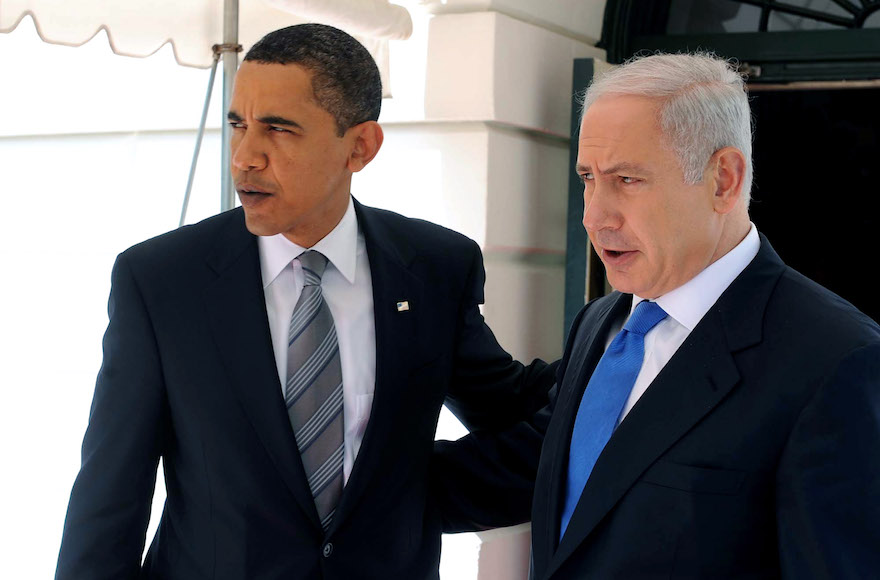 (JTA) — Barack Obama, a Democratic presidential hopeful, did something few before or since have accomplished as a speaker at AIPAC’s annual conference: In 2008, the then-U.S. senator from Illinois received a standing ovation for talking about something that had nothing to do with Israel.

“In the great social movements in our country’s history, Jewish- and African-Americans have stood shoulder to shoulder,” he said.

Obama seemed to herald a return to an alliance long troubled, in part because of differences over Israel and increasing African-American sympathies for the Palestinians. Candidate Obama sought out the council of Israel’s then-opposition leader Benjamin Netanyahu and a range of pro-Israel figures in the United States on the threat posed by Iran and on the means to achieve peace. As president, he expressed affection for the state — and for the Jewish community — in ways that suggested his belief in the U.S.-Israel alliance stemmed from his perspective as a black man.

“To a young man like me, grappling with his own identity, recognizing the scars of race here in this nation, inspired by the civil rights struggle, the idea that you could be grounded in your history, as Israel was, but not be trapped by it, to be able to repair the world — that idea was liberating,” he told the Adas Israel congregation in Washington in May 2015, the first address by a president to a Jewish congregation. “The example of Israel and its values was inspiring.”

Obama put an end to the linking of loan guarantees to Israel’s spending on settlement construction and increased defense assistance to Israel to the unprecedented level of $38 billion over 10 years, making permanent hundreds of millions of dollars in assistance to Israel’s anti-missile programs. He authorized assistance to Iron Dome, the short-range anti-missile system that has proven critical in Israel’s three wars since 2009 with Hamas on its border with the Gaza Strip. In 2011, when Israeli diplomats were trapped inside the Cairo embassy by rioters, Obama made their extraction a priority. “This was a decisive and fateful moment,” Netanyahu said. “He said ‘I will do everything I can,” he said, referring to Obama. “And so he did.”

There was a hard edge to Obama’s embrace of the alliance: Israel’s military might and intelligence savvy provided the pressure that Obama sought to leverage Iranian compliance with his demands that it roll back its nuclear weapons program. Under Obama, Israel and the United States are believed to have worked together to create the computer virus that crippled Iran’s uranium enrichment capability in 2010. Israelis unhesitatingly said military and intelligence cooperation was closer under Obama than any of his predecessors.

Beyond the secret relationships, there were plenty of firsts: Obama was the first president to conduct formal Passover seders in the White House; the first to mark Jewish Heritage Month in May with a party; the first to deliver a speech at the Israeli Embassy, marking Holocaust remembrance; the first, in 2016, to hold multiple Hanukkah parties to accommodate demand. (Multiple Christmas parties have long been a thing.) He may have been the first, in 2011, to structure a speech to a Jewish audience, the Union for Reform Judaism, around a dvar Torah.

But Obama’s relationship with Israel suffered from the flaw of every good friend who is certain he “gets” you: He doesn’t truly get you.

Before Obama was elected, he told a group of Jews, “I think there is a strain within the pro-Israel community that says unless you adopt an unwavering pro-Likud approach to Israel that you’re anti-Israel, and that can’t be the measure of our friendship with Israel.” The implication was that Netanyahu’s party was a nuisance — especially awkward after Netanyahu would return to office just weeks after Obama was inaugurated.

The conversation between Obama and Israelis — Netanyahu, in particular — seemed susceptible to pratfalls however good the intentions on both sides.

Obama addressed the Muslim world in a 2009 speech in Cairo, and said Holocaust denial was corrosive and counseled acceptance of Israel; he was lacerated because it seemed to some that he predicated Israel’s existence on the Holocaust. The next year, Vice President Joe Biden landed in Israel for a let’s-be-friends trip; within hours the mood was soured when a midlevel Israeli bureaucrat announced, apparently to Netanyahu’s surprise, that there would be new building in eastern Jerusalem.

And the next year, in 2011, Obama outlined a Middle East policy that for the first time included a formal American endorsement of a longstanding Israeli demand that a Palestinian state be demilitarized. Whatever goodwill that may have garnered was squashed by Obama’s inclusion of the 1967 lines as the basis for a Palestinian-Israeli border. Netanyahu subsequently lectured Obama on Middle East history in the Oval Office.

Nothing frustrated Netanyahu and his advisers more than repeated assurances from Obama and his cohort that they knew what was good for Israel, particularly heading into the Iran nuclear deal in 2015.

“To friends of Israel, and to the Israeli people, I say this: A nuclear-armed Iran is far more dangerous to Israel, to America, and to the world than an Iran that benefits from sanctions relief,” he said in a 2015 speech on the deal, which swapped sanctions relief for a rollback in Iran’s nuclear program.

Netanyahu decried the deal as a deadly one, saying its “sunset clauses” removing some restrictions simply delayed for a few years Iran’s nuclear weapon. He arranged with the Republican leadership in Congress to speak out against the deal in a joint meeting, infuriating Obama and prompting a rift between Israel and Democrats that persists until this day. AIPAC threw itself into trying to stop the deal, intensely lobbying lawmakers to kill it and other Jewish organizations to speak up against it.

The pattern — an act of friendship followed by a diplomatic slapdown — persisted until the end of the Obama presidency. His administration’s two final Israel-related acts were signing the deal with Israel that guaranteed unprecedented levels of assistance — and then letting the U.N. Security Council adopt a resolution condemning Israel’s settlements. Notably, it was the first time that Obama failed to stop a Security Council resolution that Israel opposed — his predecessors allowed through multiple such resolutions.

Obama was adamant to the end that he had Israel’s best interests at heart. Four days before he left office, he told Israel’s Channel 2, “I believe it would be a moral betrayal for the world not to protect and secure a homeland for the Jewish people.”