Jimmy Carter: The unpopular force behind the Camp David Accords 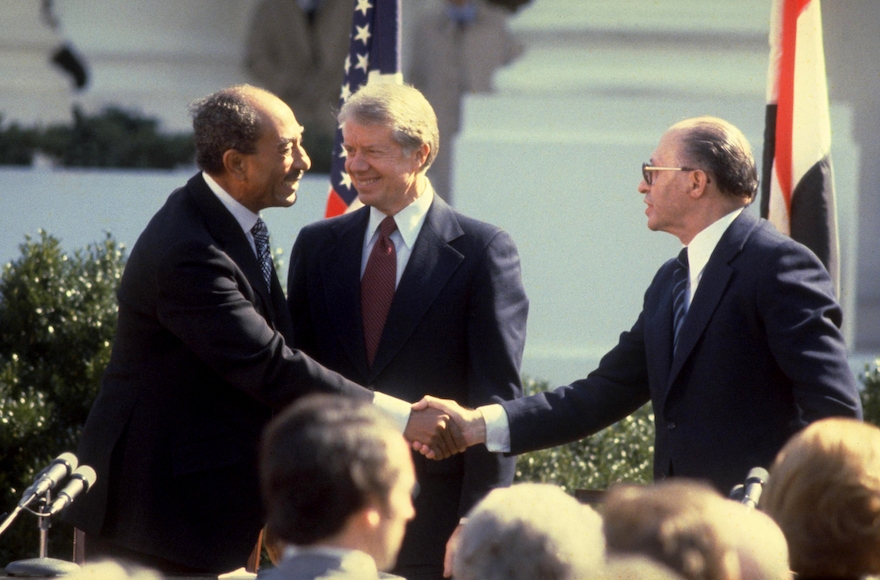 (JTA) — Jimmy Carter, the Democratic governor of Georgia, defeated Ford to become president in 1976. The devoutly Christian peanut farmer was the only figure at the 1978 Camp David peace talks between Israel and Egypt who was unflaggingly committed to the outcome.

Anwar Sadat, the Egyptian president, was unsure how much he could sacrifice to peace and maintain his position of leadership in the Arab world. Israeli Prime Minister Menachem Begin emerged from a political strain that did not give up land for anything. Aides to all three leaders advised them at various junctures to save face, cut losses and give up.

Carter was the perpetual engine of the talks that brought about a peace on Israel’s southern flank that has lasted until now, including a period when Egypt was ruled by the Muslim Brotherhood. For nearly two weeks, he managed to keep the Israeli and Egyptian leaders in place at the Camp David retreat in the Maryland hills, shuttling between their cabins to work out each nuance.

“Here is President Carter working day and night with those yellow legal pads with his sense of mission,” Elyakim Rubinstein, a member of the Israeli delegation who went into the talks believing they would be a bust, said at a symposium in 2003 on the 15th anniversary of the accords.

His was also the human rights presidency: He made the implementation of the Helsinki Declaration, requiring the Soviet Union to respect human rights, a hallmark of his presidency; spoke out on behalf of refusenik Natan Sharansky; and launched the process that would establish the U.S. Holocaust Memorial Museum in Washington, D.C.

For Israelis and the pro-Israel lobby, the flip side of Carter’s doggedness was a perceived stubborn arrogance. Carter came across to them as someone who believed he knew best. He was the first president to unequivocally declare Israel’s settlements in captured lands to be illegal. He launched secret contacts with the Palestine Liberation Organization. And he forged ahead with plans to sell Saudi Arabia F-15 combat aircraft.

In 1980, Carter became the first Democratic presidential nominee since 1924 not to garner a majority of Jewish voters. (He won a plurality of the Jewish vote in a three-way race with 45 percent, but lost the election.)

Carter remains among the most popular former presidents, but with American Jews, if anything, his relationship has become more fraught. In 2006, in a book he predicted that Israel was on a path to apartheid if it did not advance toward peace with the Palestinians. He met with leaders of the Hamas terrorist group.

“He is flawed, he’s got an obsession with Israel, a biased obsession that borders on anti-Semitism,” Abraham Foxman, then the director of the Anti-Defamation League, said in 2012.

Those present at Camp David say Carter, who as governor of Georgia visited Israel and was outspoken on behalf of Soviet Jews, should above all be remembered for making peace.

“You could argue with positions that President Carter took over the years on this or that aspect,” Rubinstein said, “but what he did then was the combination of his being an engineer and a religious man, believing religiously in peace and in the bettering of human life.”