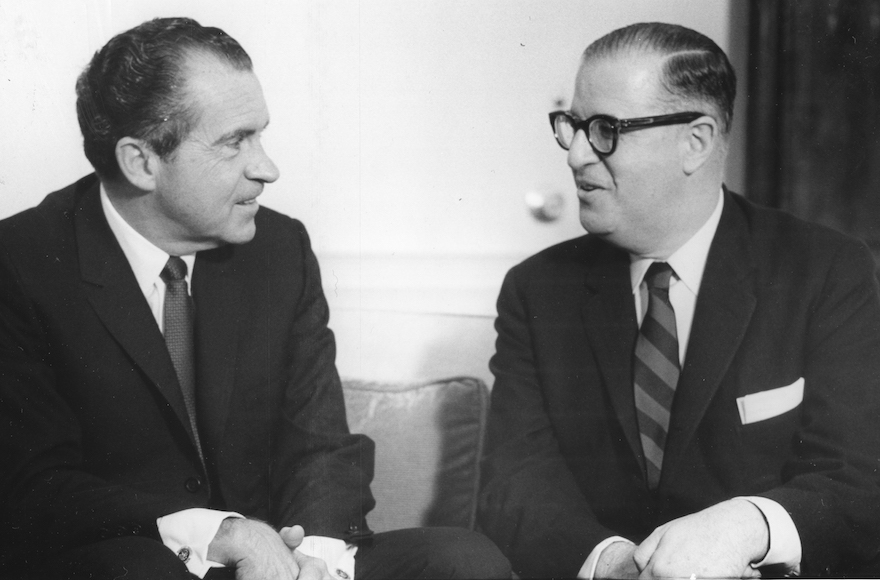 (JTA) — Nixon liked Israelis — a lot. He was close to Golda Meir, the prime minister; Moshe Dayan, the defense minister; and Yitzhak Rabin, the ambassador to the United States. Rabin would break diplomatic protocol and campaign for Nixon in 1972. Nixon saw his resolute, paranoid Cold Warrior reflected in Israelis. Like him, they were hard-edged realists who were forced to play for the highest stake of all, their existence.

Nixon stands out among presidents for taking the boldest risk for Israel: a much-needed arms airlift during the 1973 Yom Kippur War. An astonishing 567 missions by American aircraft (not to mention deliveries by sea and El Al flights) kept Israel fighting. Nixon ignored the counsel of his closest adviser, Henry Kissinger, who wanted to allow the war to play out for a while longer to give Egyptian President Anwar Sadat the political cover he needed to make peace in its aftermath. The stakes were too high for Israel to play with timing, Nixon told Kissinger.

Nixon had little to gain and much to lose. He was in his second term and, in any case, the Republican was never going to win over the largely liberal Jewish vote. The airlift helped spur an Arab oil embargo, driving gasoline prices sky high. Preoccupied by Watergate and mired in Vietnam, and against the advice of his Jewish adviser, Nixon risked a new war with the Soviets to save Israel.

Nixon “made it possible for Israel to win, at some risk to his own reputation and at great risk to the American economy,” historian Stephen Ambrose said.

“President Nixon has done many things that nobody would have thought of doing,” Meir said, toasting Nixon during his 1974 visit. “All I can say, Mr. President, as friends and as an Israeli citizen to a great American president, thank you.”

The man who saved Israel, however, seemed unhealthily obsessed with Jews — as the White House tapes released subsequent to Nixon’s removal from office revealed. He shared with underlings a host of complaints: “The Jews are all over the government.” “Most Jews are disloyal.” “You can’t trust the bastards. They turn on you.” “The Jews are born spies.”

He wasn’t just blowing steam. Jews were prevalent on Nixon’s infamous “enemies list,” drawn up, according to a 1971 memo by White House counsel John Dean, to assess “how we can use the available federal machinery to screw our political enemies.” The same year, Nixon asked Fred Malek, the White House personnel chief, to count and name the Jews employed by the Bureau of Labor Statistics. Nixon was convinced Jews in the bureau were skewing jobs numbers to make him look bad.

“We have been through, over these years, some difficult times,” he said. “During the period that I have served as president of the United States, we have been through some difficult times together, and I can only say that the friendship that we have for this nation, the respect and the admiration we have for the people of this nation, their courage, their tenacity, their firmness in the face of very great odds, is one that makes us proud to stand with Israel, as we have in the past in times of trouble, and now to work with Israel in a better time, a time that we trust will be a time of peace.”