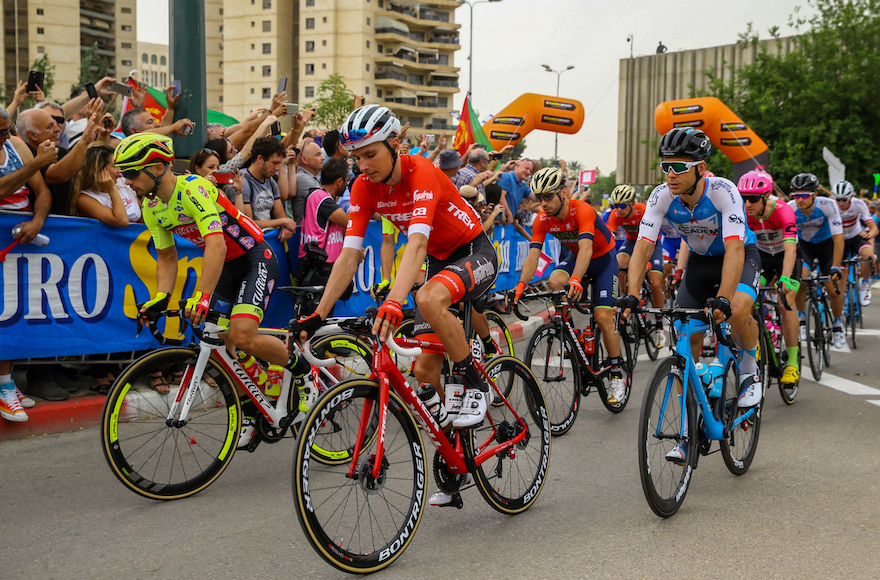 Giro d'Italia cyclists riding in the Israeli city of Beersheba, May 6, 2018. (Flash90)
Advertisement

JERUSALEM (JTA) — About an hour before the Giro d’Italia, cycling’s second biggest race, was about to kick off in this city, Simona Maor and her husband were ready.

They had driven up from the desert city of Beersheba, located about an hour south. Dressed in bright pink, the Giro’s official color, the couple stood by the side of the road, near the starting line, ready to cheer on the riders. And they said they’d be back in Beersheba two days later to watch the race’s third stage.

“That they’re in Israel, that they got to Israel, is the peak of success,” Maor told JTA. “It’s — wow, Giro in Israel. That’s the best thing that could be.”

But before this year, had Maor ever heard of the Giro d’Italia? 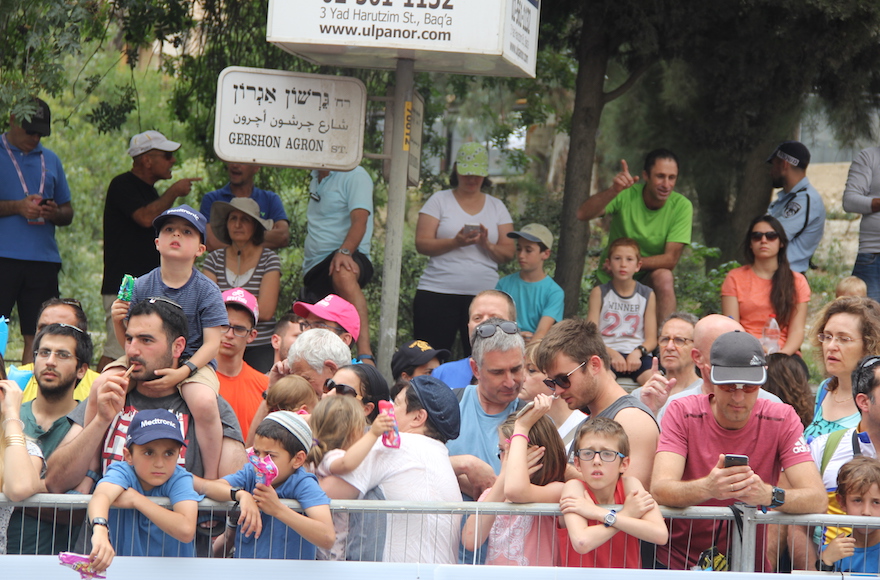 A crowd of Israeli spectators lining a Jerusalem street at the opening of the Giro d’Italia, May 4, 2018. (Ben Sales)

Like many Israelis, Maor was swept up this week by the Giro, which held its opening three stages in Israel over the weekend. Some of the thousands of spectators who lined the streets to cheer the riders were bona fide Israeli cyclists, ecstatic that their country was finally hosting a major race. Many, however, were ordinary Israelis who were just eager for the world to see their country in a positive light.

“It’s an opportunity for the world to see us for who we are — people who smile even when there’s pressure, tension, even when there are clouds of war,” said Dorit Ariel, who also traveled to Jerusalem to see the opening stage. “It gives us the strength to go on, every time there’s something like this.”

One of cycling’s three Grand Tours, the Giro is the sport’s second-biggest event after its French parallel. Most of its 21 stages take place in Italy, but every other year the race opens in another country. It was the first time the Giro was held outside Europe.

The race began with 176 professional riders divided into 22 teams, and it was the first time an Israeli team with Israeli riders — called the Israel Cycling Academy — competed in a Grand Tour.

Friday’s opening stage, a time trial where individual riders competed against the clock, traced a loop around Jerusalem. The following day, the riders raced some 100 miles from the northern city of Haifa to Tel Aviv, cutting into the Galilee before riding along the Mediterranean coast. The third stage, on Sunday, took the riders from Beersheba through the Negev Desert to Eilat, on Israel’s southern tip. From there, the competitors flew to Sicily to continue the race. 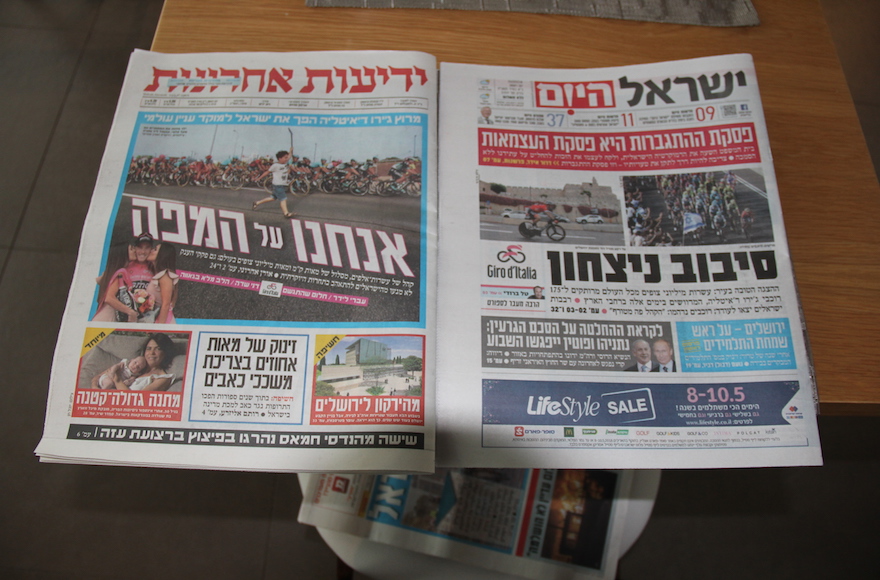 Cycling isn’t a popular professional sport in Israel, but on Sunday, the country’s two leading newspapers put it on their front pages. (Ben Sales)

It was no accident that helicopter shots of the riders just so happened to show scenic landscapes. The man who brought the Giro to Israel, Canadian-Israeli real estate magnate Sylvan Adams, did it as a public relations move.

The Giro opened as Israel clashed with Palestinian protesters at the Gaza border and about a week ahead of the U.S. Embassy’s fraught move to Jerusalem from Tel Aviv. But like previous Israeli efforts to advertise the country’s tech prowess or sunny beaches, Adams aimed to project the image of what he called a “normal country,” not one torn by conflict.

“The beauty of cycling in terms of bringing it here is it all takes place outside,” Adams told JTA on Sunday following the Stage 3 finish in Eilat. “We showed the entire country from north to south. We showed our people lining the streets cheering, giving the whole race energy. This is the most beautiful thing we could do to show the real Israel to the world.” 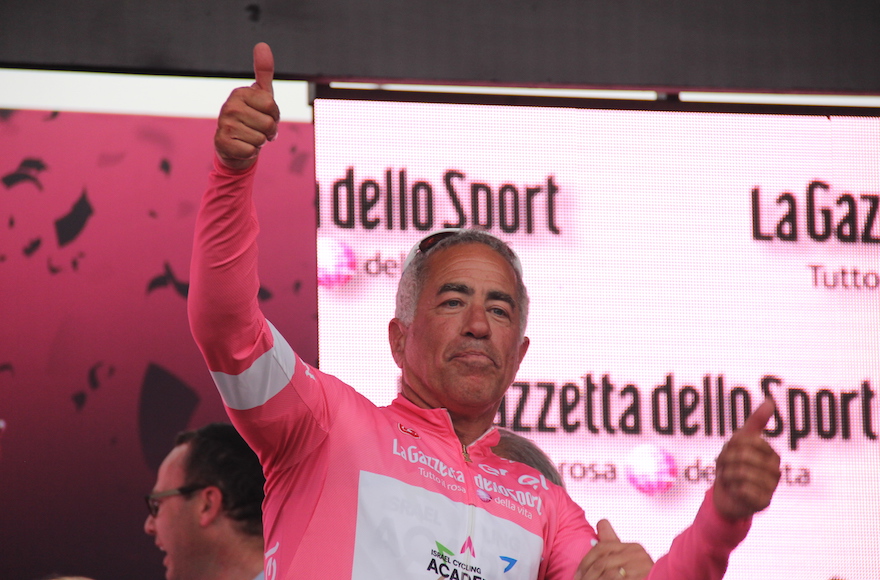 Sylvan Adams, a Canadian-Israeli real estate mogul, organized the Giro’s start in Israel as a way of promoting the country. (Ben Sales)

Before it began, the Giro had a couple brushes with the conflict. Supporters of the movement to boycott Israel urged the race to relocate. And when the Giro announced that it would begin in West Jerusalem — as opposed to just Jerusalem — the Israeli government threatened to withdraw its invitation. Israel sees this entire city as its capital, a claim most of the international community does not recognize.

It was not the first time the Giro has opted to begin in a region with ethnic tensions. In 2014, the race started in Northern Ireland, a region with a bloody history of Catholic-Protestant conflict. And in 2006, it launched in Belgium, whose Flemish and Walloon populations have considered splitting.

By Friday, all hints of tension had disappeared. In Jerusalem, spectators lined the streets. They included an amateur cycling team that had special jerseys made in honor of the race and a small group of Eritreans waving flags to cheer on the country. Some of the Africans wore shirts protesting the actions of their nation’s authoritarian government.

On Saturday, Israelis packed the sides of highways in its most densely populated region, on the coast. They cheered the two Israeli riders — Guy Niv and Guy Sagiv — as they passed their respective hometowns. A father and son wore matching hot pink costumes and rode a bicycle built for two alongside the cyclists. 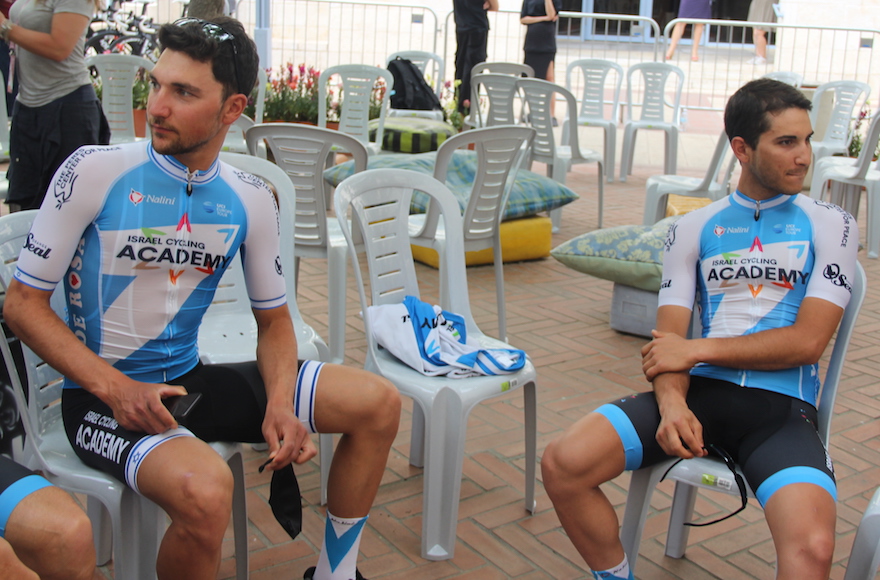 Guy Sagiv, left, and Guy Niv relax before the opening ceremonies of the Giro d’Italia in Jerusalem, May 3, 2018. They are the first two Israeli riders to participate in one of cycling’s major Grand Tour races. (Ben Sales)

As the race came to Eilat on Sunday, the city on the Red Sea was decked out in pink. At the finish line, an artist painted kid’s faces near where spectators could stick their heads into a set of life-size cutouts of riders. Adults and children ran around in hot pink shirts.

“It’s kind of a dream come true that they’ve come here,” said Ido Benifla, an amateur Israeli cyclist who managed the Giro’s badge system in Israel, and who has ridden the same routes as the cyclists. He was surprised by the crowds because in general, “Israel isn’t so into cycling.”

Adams hopes to change that. An amateur cycling champion himself, he contributed funding for the Israel Cycling Academy, the country’s first pro team. And he is building a velodrome near Tel Aviv that is set to open this year. On Sunday, he told reporters  that he hopes to one day see a Tour of Israel.

Israeli cyclists in the crowd agreed, pointing to abundant trails through national forests and deserts, along with a sunny season that lasts much of the year. But they doubted that road cycling could take hold here.

“We don’t have a a lot of roads, and there are a lot of cars,” said Nir Tiger, an amateur Israeli cyclist. “And Israeli drivers are not kind.”