Netanyahu meets with Putin in Moscow to discuss Syria 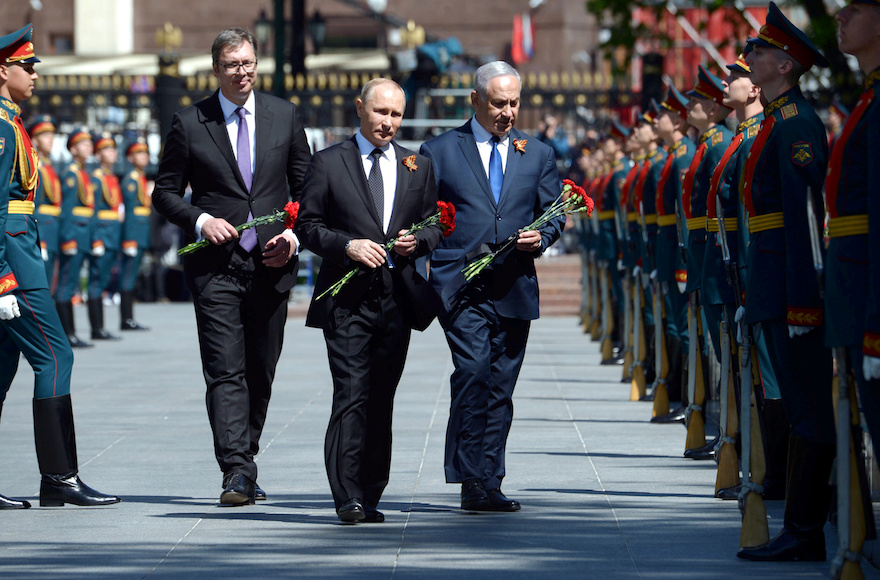 The parade commemorates the Allies victory over Nazi Germany in World War II.

Netanyahu went to Russia the day after President Donald Trump pulled out of the Iran nuclear deal, which Putin strongly supports.

The leaders met at the Kremlin on Wednesday afternoon.

“We in Israel do not forget for a moment the great sacrifice of the Russian people and the Red Army in the victory over the Nazi monster,” Netanyahu said at the start of their meeting. He noted that Israelis do not forget “the great lesson of the need to stand against a murderous ideology in time. It is unbelievable, but 73 years after the Holocaust, there is a country in the Middle East, Iran, that is calling for the destruction of another six million Jews.”

Netanyahu and Serb President Aleksandar Vucic joined Putin for the march and then attended a wreath-laying ceremony for the unknown soldier at the memorial for Red Army soldiers who fell in World War II. They also laid flowers on the stones of the Moscow Hero City Monument in the presence of an honor guard.

At the start of the meeting, Netanyahu thanked Putin for “the chance of discussing regional issues and the attempts to solve crises and remove threats in a responsible manner.”

Prior to leaving for Moscow, Netanyahu spoke with reporters. “In light of what is currently happening in Syria, it is necessary to ensure the continued coordination between the Russian military and the IDF,” Netanyahu said.

Russia has said it is considering supplying Syria with its advanced S-300 long-range surface-to-air missile systems in the wake of airstrikes on Syrian military targets.