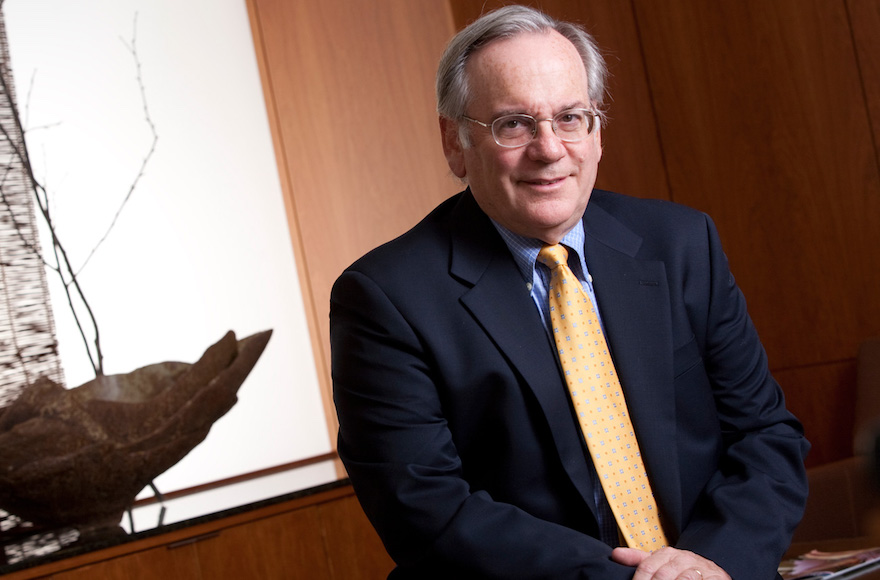 Dr. Mark Israel, once director of cancer care at Dartmouth in New Hampshire, where he was responsible for care of 30,000 patients per year, now is focused on supporting cancer research in Israel. (Courtesy of Mark Israel)
Advertisement

He has worked in medical clinics, as a laboratory researcher and as director of the cancer center at Dartmouth’s medical school.

But perhaps no position Israel has occupied in four decades in medicine offers as much influence and opportunity to help cancer patients as his new job: national executive director of the Israel Cancer Research Fund. The organization provides crucial funding for cancer research across more than 20 Israeli institutions.

“Israel is the center of so much pioneering cancer research,” Dr. Israel said. “When I think about the science that’s transforming cancer care, so much of it comes back to Israel. There’s no place I’d rather be.”

The focus of Dr. Israel’s own research has been to understand the molecules driving the growth of cancerous tumors so that drugs to inhibit them can be developed.

This work is painstaking. It can take years for researchers to identify a target, and then many more before targeted drugs are developed. Breakthroughs are rare, and when they do occur they are often the result of the work of many researchers toiling individually in labs across the world.

In some key areas, those breakthroughs have come from Israeli researchers, who have made an outsized contribution to the cancer fight. Two Israeli researchers — both funded in part by the Israel Cancer Research Fund — won a Nobel Prize for work that led to a breakthrough drug to treat multiple myeloma, a blood cancer. ICRF-funded Israeli research also contributed to the development of the miracle drug Gleevec, used to treat a particularly aggressive form of cancer called chronic myelogenous leukemia. The list goes on.

Among the avenues of Israeli research Dr. Israel considers promising are immunotherapy, which seeks to harness the body’s own defense system to fight cancer, and growth regulation and signal transduction, which attempts to identify how damaged genes drive tumor growth. The Israel Cancer Research Fund distributes about $4 million annually in grants.

Dr. Israel will spend the bulk of his time at the organization fundraising to support Israeli research projects, and the remainder evaluating grant proposals and determining which scientists to support.

“I see my role as providing the opportunity for people who want to make a difference in impacting the cancer problem,” Israel said.

A native of Newburgh, New York, who has been married to his childhood sweetheart for 48 years and is a father to three grown children, Israel never wanted to do anything other than practice medicine. Throughout his career, he continually sought to place himself in areas of medicine where he could have the greatest effect on people’s lives.

After graduating from the Albert Einstein College of Medicine, Israel worked as a pediatric intern at Boston Children’s Hospital. Then he spent the next four decades focused on studying the ailments he saw in those hospitalized children.

“While treating children with cancer in the clinic, I realized that even the brutal, toxic treatments in use were oftentimes ineffective,” Israel said. “I decided I could have a more substantial impact doing research that might provide an enhanced benefit for a much larger number of patients.”

As a fellow in pediatric oncology at the National Institutes of Health, Israel developed a special interest in neuroblastoma, a type of tumor that affects nerve tissue and occurs almost exclusively in children.

Israel eventually rose to become the director of Dartmouth Medical School’s Norris Cotton Cancer Center, where he was in charge of delivering comprehensive clinical care to more than 30,000 patients every year.

The cancer center in New Hampshire has an annual research budget of approximately $50 million and is one of only 69 U.S. facilities designated by the National Cancer Institute as a comprehensive cancer center. In Israel’s 15 years there, the center grew to encompass 16 outreach centers across New England that brought advanced cancer care to rural communities and small regional hospitals. It also made significant advances in research capacity, particularly the development of a bioinformatics program — an approach to research that mines enormous data sets to identify patterns useful to researchers.

“I have known Mark for more than 20 years and have followed his many important contributions to science,” said Dr. John Mendelsohn, past president of the MD Anderson Cancer Center in Houston. “Mark is a superb choice to lead ICRF. He is uniquely positioned to understand the science and to advance ICRF’s mission to discover new and more effective treatments in the battle against cancer.”

In his new position in New York, Israel is not only raising money for some of the most promising cancer research being done in the Jewish state, but also providing a counterpoint to those who seek to isolate Israeli scientists as part of the Boycott, Divestment and Sanctions movement against Israel, known as BDS.