Why these Latin American countries support moving their embassies to Jerusalem 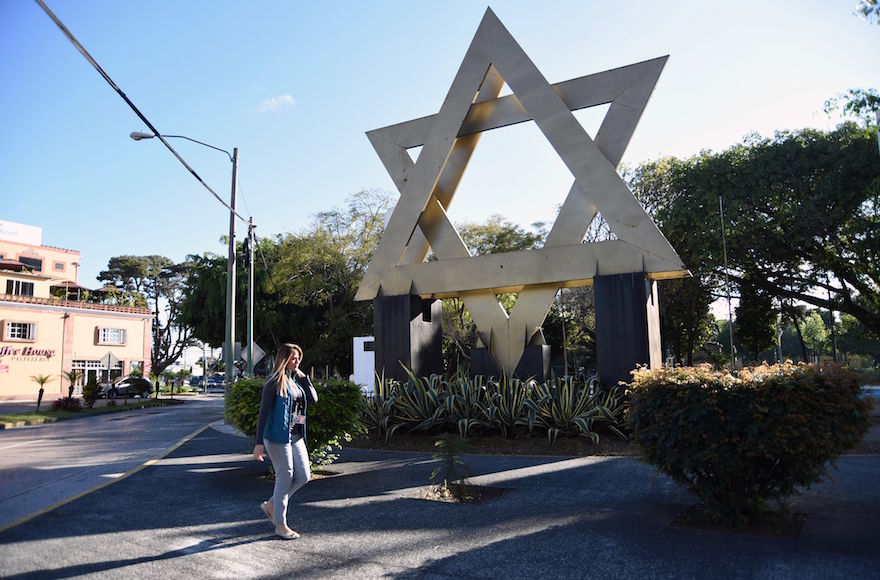 (JTA) — President Donald Trump’s decision in December to recognize Jerusalem as Israel’s capital drew wide international criticism, with 128 countries including the United Kingdom, Germany and France voting in favor of a United Nations resolution condemning it.

But several countries saw Trump’s decision in a different light: as an example to follow.

Shortly after the United States officially moves its embassy from Tel Aviv to Jerusalem on Monday, it will be joined by Guatemala and Paraguay. Both countries are planning to make the move this month, and Honduras may be next: Its Congress recently passed a resolution urging its foreign ministry to move its embassy.

Along with the Czech Republic, whose president said last month it will begin the process of moving its embassy to Jerusalem, these countries belong to a small club (albeit one with a superpower). On a visit to Venezuela on Monday, Palestinian Authority President Mahmoud Abbas urged other Latin American countries not to move their embassies.

So how come? Why do these Latin American countries go where others fear to tread?

Observers suggest a number of reasons, or a combination thereof: The countries are likely motivated by a desire to curry favor with the Trump administration, their leaders’ personal views of the Jewish state and strong historic ties to Israel.

In the cases of Guatemala and Honduras, both countries are facing or recently faced political crises — Guatemalan President Jimmy Morales is mired in a corruption scandal and Honduran President Juan Orlando Hernandez’s recent re-election was dogged by allegations of voter fraud. Their leaders are looking to the U.S. for support, said Arie Kacowicz, a professor at the Hebrew University of Jerusalem specializing in Latin America. 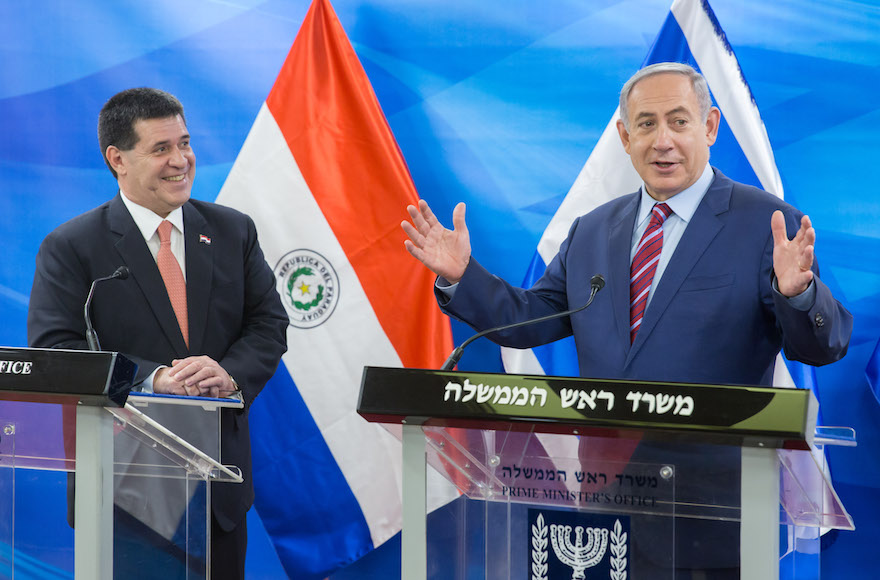 “They pretty much need and want support and legitimacy from the U.S. and one way of achieving that is by being on friendly, cordial or even extraordinary terms with Israel,” he told JTA. “So if the U.S. is showing the way on this particular issue of Jerusalem, the natural candidates to follow would be those two Central American countries.”

Though the countries are looking to strengthen ties with Israel, that is not their primary focus, Kacowicz said.

“For Guatemala and Honduras, the U.S. is primordial. It’s much more important than Israel,” he said.

The two countries also have large immigrant populations in the U.S. that are facing threats of deportation. Those immigrants contribute to their home countries’ economies — for example, a tenth of Guatemala’s gross domestic product comes from remittances sent back by Guatemalans living abroad. It makes sense to want to be on the Trump administration’s good side.

Moving their embassies or expressing support for doing so is “a show of good will” to Trump and the U.S., agreed Mariano de Alba, associate director of the Adrianne Arsht Latin America Center at the Atlantic Council, a think tank focusing on international affairs.

The embassies of Guatemala, Paraguay and Honduras in Washington, D.C., did not respond to requests for comment by JTA in time for publication.

Trump has signaled that it cares about how other countries respond to its policies regarding Jerusalem. In December, the president said the U.S. was watching the votes of its allies on the U.N. condemning his recognition of Jerusalem as Israel’s capital. One hundred twenty eight countries voted to pass the resolution with only nine — including Guatemala and Honduras — voting against it and 35 countries abstaining — including Paraguay. The resolution asserted the traditional position that “Jerusalem is a final status issue to be resolved through negotiations in line with relevant United Nations resolutions.”

Following the vote, U.N. ambassador Nikki Haley even threw a party for the 65 countries that did not support the resolution. The event was labeled as a means to thank the countries for “their friendship to the United States,” according to a copy of the invite obtained by CNN.

But it’s not all about Trump. The three countries have ties to Israel that date back to its founding. 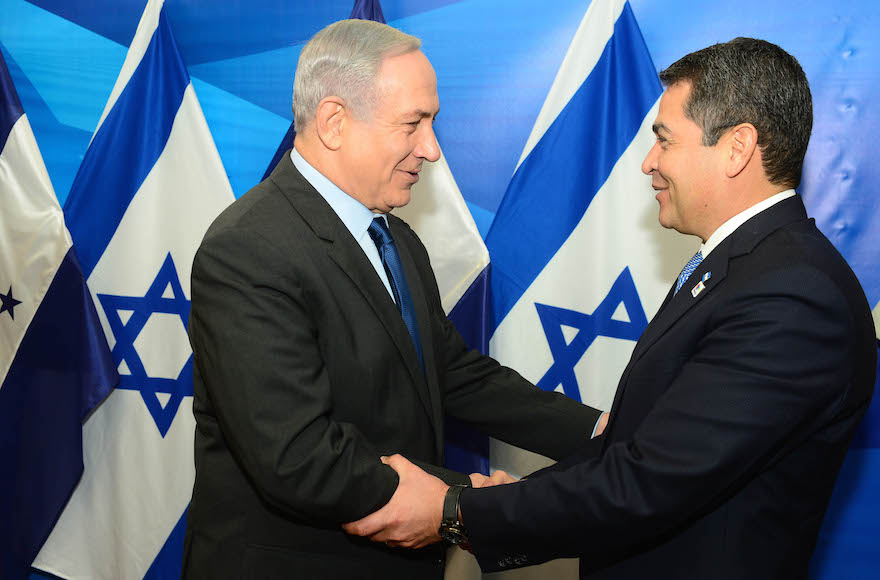 “Most Latin American countries are relatively young, and they were very much captivated by Israel’s story, a young country beating the odds after destruction in the Holocaust, and trying to make it in a very hostile environment,” Vann said.

Guatemala and its U.N. ambassador Jorge Garcia Granados played a crucial role in the adoption of the U.N. partition plan for Palestine in 1947, which recommended creating a Jewish and an Arab state in prestate Israel. In 1948, Guatemala became the first in Latin America to recognize Israel, setting off a domino effect in the region.

Following Israel’s establishment, the country focused on achieving international recognition of Jerusalem as its capital, said Jonathan Grossman, a postdoctoral research fellow at the Institute for Israel Studies at the University of Texas at Austin. He has researched ties between Israel and Latin America.

“Latin America was a major target in this struggle because they were mostly very friendly toward Israel,” Grossman said.

The campaign was successful and some 11 Latin American countries opened up embassies in Jerusalem, starting with Guatemala in 1948.

But ties soured in 1967, following the Six-Day War, which drew wide international condemnation. Then in 1980, when the Knesset passed a law that declared the entire city of Jerusalem to be Israel’s capital, all the Latin American countries as well as the Netherlands and Haiti, decided to move their embassies out of Jerusalem. Venezuela turned hostile under its late dictator, Hugo Chavez, and ties between Argentina and Israel have blown hit and cold since the the 1992 terrorist attack on Israel’s embassy in and the 1994 bombing of the AMIA Jewish center, both in Buenos Aires.

The last 15 years have once again seen improved ties between Israel and some Latin American countries, including Guatemala, Honduras and Paraguay, said Daniel Mariaschin, CEO of B’nai B’rith International, which has projects in Latin America.

“The leadership in these countries in this past 15-year period has made the point of reaching out to Israel, as Israel has reached out to them,” Mariaschin said.

In addition to trade interests, each of the countries’ leaders also have personal reasons for supporting Israel.

Morales of Guatemala is an evangelical Christian, as is 40 percent of Guatemala’s population, and evangelicals have strong religious attachments to Israel. Paraguay’s president, Horacio Cartes, has close ties with Israeli Prime Minister Netanyahu, and one of his campaign advisors, Ari Harow, is an Israeli-American who previously served as Netanyahu’s chief of staff.

Hernandez of Honduras participated early in his career in an outreach program by Mashav,  Israel’s Agency for International Development Cooperation.

Grossman said that Trump’s decision opened the door for Latin American countries that have good relations with Israel to follow suit.

“This move kind of removes the barrier for many of those small countries who have excellent relations with Israel, very developed trade relations and security cooperation,” he said.

Will the upcoming moves by Guatemala and Paraguay spark a trend? De Alba said it is “very highly unlikely” that a large number of Latin American countries will follow suit because such a move is seen as “too forceful.”

“The position of the majority of the Latin American countries will be not to do so and try not to take sides on the [Israeli-Palestinian] conflict,” he said.

Meanwhile Mariaschin thinks the Latin American countries’ decisions may lead others to at least rethink their policies.

“I think these moves will spur other countries to reconsider because there’s a critical mass which is assembling here, not only in Latin America but in other places as well.”