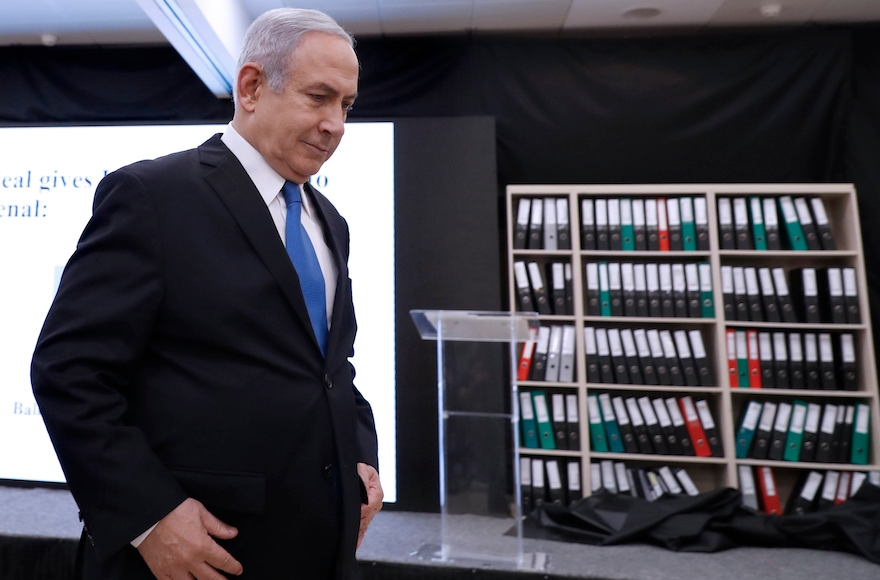 (JTA) – On Sunday, Benjamin Netanyahu began his week by meeting his Cypriote and Greek counterparts to finalize the commercial export to Europe of Israeli gas that he has pushed to exploit for about a decade.

On Tuesday, President Donald Trump’s decision to withdraw the United States from nuclear deal with Iran was widely seen as a coup for Israel’s prime minister, a fierce opponent of the deal.

On Wednesday, he was the only Western leader at the annual May 9 military parade in Moscow as a personal guest of President Vladimir Putin — a patron of Syria and of Iran with whom Netanyahu has nonetheless cultivated a beneficial partnership.

And on Thursday, Netanyahu ordered — with backing from the European Union and Russia’s silent approval — a punishing strike on Iranian bases in Syria. It was a retaliation for the firing into Israel of a barrage of rockets that did not hit thanks to Israel’s advanced projectile interception systems — and even Iran’s allies failed to come to its defense.

All in all, a pretty good buildup for Netanyahu’s grand prize: The inauguration of the U.S. Embassy in Jerusalem, which Netanyahu has celebrated as a historical moment since Trump announced it in December.

This streak of successes for Netanyahu has wowed his critics and supporters alike, who see it as a huge return on several of his most controversial long-term strategies.

Verter also called Netanyahu in his column “flawed in many respects, up to his eyeballs in corruption and inquiries, devoid of a foreign relations horizon,” a liar, and an “inciter and divider and perhaps a megalomaniac.”

But after this week, “these are Netanyahu’s great days,” Verter added. “His rivals seated around the political poker table are mere holograms.”

Avishai Ivri, a senior journalist in the Israel Broadcasting Corporation, wrote on Twitter: “Never in history was a head of state quoted one day by the president of the United States in a crucial speech to the nation about an essential foreign policy shift, and the next day walked next to the Russian president on Red Square at a major state event. These things just don’t happen.”

Ivri was referring to Trump’s statement about Israel in his speech Tuesday, in which he announced that he was taking the United States out of the 2015 nuclear deal with Iran. It offered Tehran international sanctions relief in return to its scaling back of parts of its nuclear program for 10 years.

Trump said Iran was not living up the deal, citing intelligence material that Netanyahu unveiled on April 30 after Israel’s Mossad stole it from Iran in a daring operation earlier this year (the operation was yet another recent success for Netanyahu, whose ordering of a botched assassination of a Hamas commander in Jordan in 1997 has made him somewhat adventure-wary).

The dividends that Netanyahu harvested from policies that for years he has been promoting are especially poignant because of the fierce opposition that those policies provoked in Israel and beyond, Verter wrote.

Indeed, Netanyahu’s big week blunted attacks by his rivals, such as Yair Lapid and Avi Gabbay of the centrist Yesh Atid and left-wing Labor parties, respectively.

Lapid had warned that Netanyahu was leading Israel into international isolation by openly confronting then-President Barack Obama, an architect of the Iran deal. And while Netanyahu’s 2015 speech in Congress against the deal boosted his popularity with some supporters, it also exposed him to criticism by Israelis who thought his famously frosty relations with Obama were a security threat (a view held by a majority of respondents to several polls at the time).

Lapid also accused Netanyahu of harming Israel’s security by revealing the cache of documents that Trump said had a decisive role in convincing him to drop the deal.

Dogged by various corruption probes over the past year, Netanyahu saw his poll numbers soar even before Thursday’s strikes in Syria – the most extensive carried out by Israel in years. After Trump made his Iran announcement, Netanyahu’s approval ratings grew by five to points, according to several major opinion polls. The polls suggested that Gabbay, recently seen as the left’s great hope, would crash with 10 seats in parliament if elections were held now. Lapid, who last year topped Netanyahu is some polls, is now trailing him by 17 points.

In terms of internal politics, Netanyahu’s aces this week could not have come at a better time for him. His diplomatic and military achievements pushed deep into the background the corruption charges that police believe merit a criminal indictment. One of the cases involves him receiving gifts worth north of $250,000 from businessmen he is said to have helped as prime minister.

“Eretz Nehederet,” the Israeli counterpart of “Saturday Night Live” and a biting critic of Netanyahu, referenced this in a sketch this week in which his police files were being shredded as Bibi paraded in a top hat signing “Bibi’s good, he’s so good.”

He was also facing heat over Israel’s lucrative natural gas holdings in the Mediterranean. His uphill battles to realize gas deals were riddled with setbacks amid accusations of corruption, cronyism and disregard for national interests.

And while many Israelis feel Netanyahu won credit fair and square this week, some on both sides of the political divide fear it will embolden him to indulge in what they perceive as his flaws as a leader, as listed by Verter.

Netanyahu is also supporting legislation meant to curtail the powers of the Supreme Court, which has obstructed several of his coalition’s right-wing policies. Seen together with other laws with a nationalistic agenda, liberals in Israel and beyond warn that Netanyahu is dismantling key parts of Israel’s democracy.

“I call him Dr. Netanyahu and Mr. Bibi,” said Uri Heitner, a historian from Kibbutz Ortal in the Golan Heights.

“This week was certainly a Dr. Netanyahu week,” added Heitner, a senior scholar at the Shamir Institute for Research in Katzrin. “But Mr. Bibi and his cult of admirers are Dr. Netanyahu’s worst enemies. With unconditional support, how will Dr. Netanyahu ever reign in his powerful lusts and passions?”