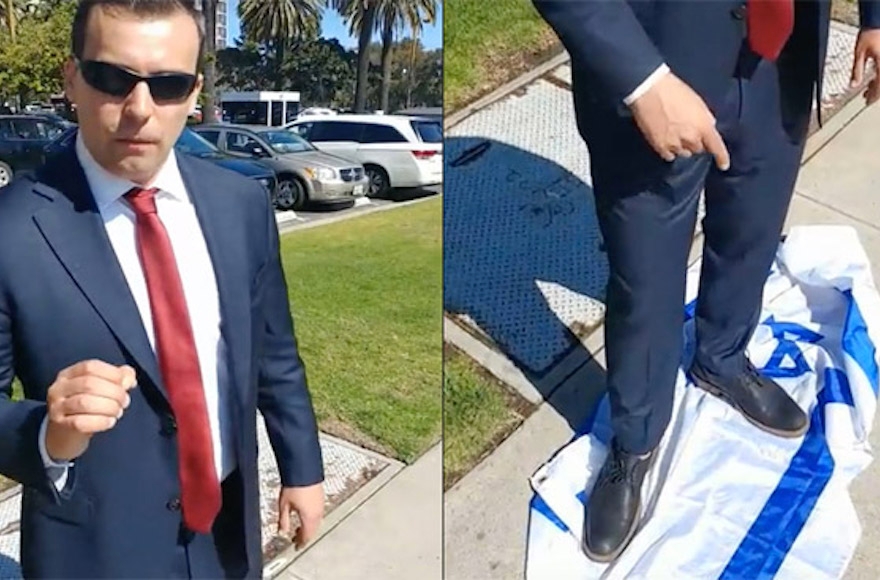 SAN FRANCISCO (J. the Jewish News of Northern California via JTA) — Patrick Little is more than an hour into an anti-Jewish tirade that doubles as the centerpiece of his campaign to unseat U.S. Sen. Dianne Feinstein when he issues a blunt warning.

“The longer the Jews try to hold onto power in a country where the public’s waking up to them … the harsher the reprisal is,” the Albany, California resident and former U.S. Marine told J. the Jewish News of Northern California this week. “It’s Jewish behavior that gets people angry at Jews. What you call anti-Semitism is caused by Jewish behavior.”

Little, 33, calls himself a white nationalist. He rejects the labels of white supremacist and neo-Nazi, saying the latter would just play right into the hands of the Jewish media. During the interview, he rattles off some familiar anti-Semitic tropes: that the Holocaust is a hoax, that Israel played a major role in the 9/11 terrorist bombings, that Jews controlled the African slave trade before the Civil War, that “Jews kill Christians — they do it a lot historically.”

He adds a few more contemporary charges, such as that President Donald Trump is being held hostage by Jews and that media organizations including Fox News are mouthpieces for Israel. He says one of his major goals as a senator from California would be to re-route all U.S. aid now going to Israel to Hezbollah, and make it a crime — punishable by the death penalty — if any politician ever suggests aid be restored to Israel.

“The Jews have controlled this country for a very long time,” he said loudly during the 75-minute interview May 9 at a Berkeley restaurant. “We’re an occupied government. This is a Zionist-occupied government, we do whatever the hell Israel wants.”

Little certainly is not the first person to spew such virulent anti-Semitism.

But what sets him apart is that on April 24, a SurveyUSA poll had him placing second in the Senate race, gathering more than twice as much support as any other Republican. If that turns out to be a correct predictor and he places second among the nearly three dozen candidates competing in the June 5 primary, he would face Feinstein in November’s general election.

Feinstein, a five-term Democrat, has represented California in the Senate since 1992, after serving as mayor of San Francisco from 1978 to 1988. At 84, she is the oldest currently serving senator.

The California Republican party has repudiated him and barred him from last weekend’s state convention in San Diego. Little walked out of that convention dragging an Israeli flag under his feet and spitting on it.

“There’s no room for that kind of hate speech that that man uses,” Cynthia Bryant, executive director of the California Republican Party, told the Los Angeles Times.

The state’s Republicans have largely given up on the U.S. Senate race, even though Feinstein has lost appeal among progressives, opening up the field to fringe players like Little.

In the SurveyUSA poll of 520 adult voters around California, Feinstein was favored by 39 percent of respondents, Little got 18 percent. No other candidate reached double figures. Little led all candidates among voters who described themselves as Republicans, conservatives and those who had not attended college, polling at 46 percent of Republican respondents.

The SurveyUSA poll was sponsored by media outlets around the state, including KPIX-TV in San Francisco. Jay Leve, CEO of New Jersey-based SurveyUSA, said it was the third of four polls on the senatorial race. The last one will be released later this month.

Even Little, who is self-financing his run for the Senate and whose campaign has been limited to online posts and messages, is not quite sure who told pollsters they would vote for him.

“I can’t say that my Anglo-Saxon-sounding name hurt me. There could have been people that were low information that just saw an Anglo-Saxon name,” he said. “It’s very hard to gauge how word is spreading, but when things like Jewish power are taboo to speak about, these things spread behind closed doors.”

“This candidate’s views are deeply offensive and anathema to what is required to be a public servant in our cherished democracy,” said Abby Porth, the JCRC’s executive director. “We call on all of California’s citizenry to reaffirm our collective desire to be represented by those with a vision for equality, honesty and a sense of shared social purpose.”

Little, who says he attended the white nationalist march in Charlottesville, Virginia, in August 2017, sprinkles Hebrew and Yiddish into his interview with J., “because it shows that I know how Jews think.”

But his sources for such knowledge have no credibility beyond an anti-Semitic fringe.

He says his conversion from a supporter of Israel to a hater of Jews occurred in the past two years after reading books such as the “Culture of Critique” series by retired CSU-Long Beach psychology professor Kevin MacDonald and those by Holocaust denier David Irving, who famously squared off against — and lost to — Holocaust scholar Deborah Lipstadt in a 1996 libel suit.

Like Little, MacDonald says Jews are holding America hostage and that anti-Semitism is rational response to their effort to destroy whites European heritage.

Little dismisses the Holocaust as fiction, saying the “internment camps that the Germans had for the Jews … were far more luxurious than the internment camps we had here in California for the Japanese during the war.”

The Auschwitz concentration camp was a country club at which Jews lived in style, he says.

“They had ice cream, swimming pools, orchestras, plays, they had soccer fields, soccer teams. They even had a whorehouse!” he exclaims. “I mean, shit, I’d like to take a vacation at Auschwitz.”

Little says Israel gives financial support to ISIS and al-Qaeda and is “America’s greatest enemy.” He says the Catholic Church has been “infiltrated” by Jews. He favors a quota system for Jews in U.S. government and the judiciary.

“I’m not just saying this stuff because I just hate Jews or something,” Little said. “No, it’s because of what the Jews have done with that power. It’s not going too good for the goyim right now.”

Little grew up in Maine in a family that he says was neither anti-Semitic nor anti-Israel. He lived in Germany for a year during high school, and attended American University for two years before completing an accounting degree at the University of North Florida. During his time in Florida, he briefly studied Hebrew while deciding which church to join.

He enlisted in 2011 when he was 26, and was angered when a fellow Marine of Palestinian descent said the State of Israel didn’t have a right to exist.

When he returned to the U.S., he got into conversations with guys on websites who spewed anti-Israel and anti-Jewish venom. Little says he read MacDonald in order to repudiated that venom, but that instead the MacDonald books “awakened” him at about the same time that Trump was elected. He claims to have quit his job as a network engineer before launching his senatorial campaign as a Republican a year later.

He says he is not anti-Semitic, because that would include Arabs.

So is he OK with being labeled as anti-Jewish?