Guatemala moves Israel embassy to Jerusalem, 2 days after US 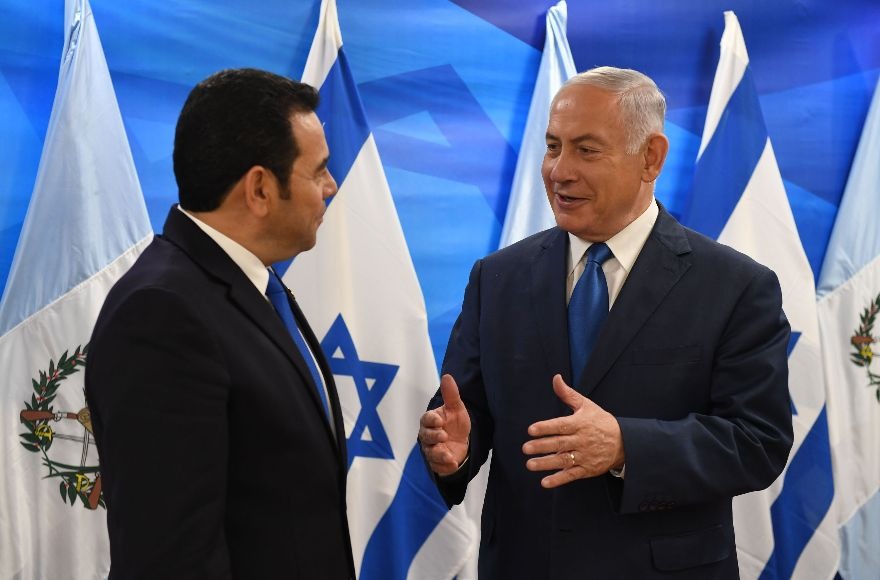 Guatemalan President Jimmy Morales, left, meets at the Prime Minister's Office in Jerusalem with Benjamin Netanyahu on May 16, 2018, after the dedication of his country's embassy in the city. (Mark Neiman/GPO)
Advertisement

JERUSALEM (JTA) — Guatemala inaugurated its embassy in Jerusalem, the second country to move its main diplomatic mission from Tel Aviv.

Israel’s Prime Minister Benjamin Netanyahu welcomed Morales and his delegation in Spanish with “Buenas Dias,” which means good day in Spanish, before switching to English.

Netanyahu noted that Guatemala was the second country behind the United States to recognize Israel’s independence after the partition vote in the United Nations.  The United States opened its Jerusalem embassy in the southern Jerusalem’s Arnona neighborhood on Monday.

Netanyahu told Morales that he would visit Guatemala on his next trip to Latin America. Guatemala previously had an embassy in Jerusalem, the first country in the world to open an embassy in the city in 1956. It closed in 1980 following a United Nations Security Council resolution that called for such closures.

Before the ceremony, Netanyahu and Morales held a private meeting. They were scheduled to meet after the ceremony with their entourages.

Paraguay is scheduled to open a Jerusalem embassy on May 21 with its president, Horacio Cartes, due to be in attendance.