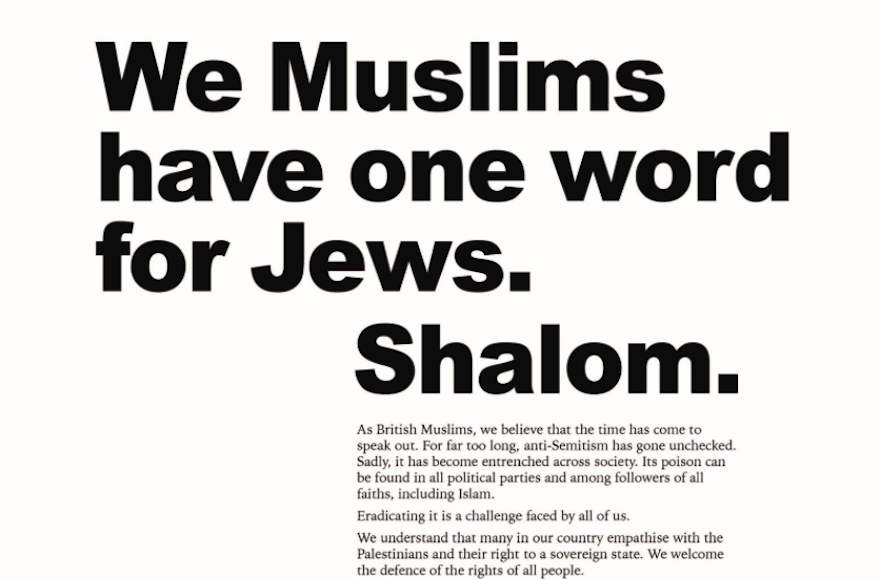 (Board of Deputies of British Jews/Twitter)
Advertisement

“We understand that many in our country empathize with the Palestinians and their right to a sovereign state,” said the ad Thursday in the Telegraph, a national broadsheet, and signed by a group called Muslims Against Anti-Semitism. “However, we must be ever vigilant against those who cynically use international issues to vilify Jews or promote anti-Semitic tropes.”

The ad was signed by the leaders of groups including Faith Matters, a Muslim anti-extremism group; the Association of British Muslims, and Tell MAMA, a clearinghouse for complaints about anti-Muslim attacks.

The Board of Deputies of British Jews praised the ad on Twitter. “Incredible solidarity – a full-page ad by Muslim sisters & brothers in today’s @Telegraph,” it said. “Thank you. Together we will defeat the twin evils of antisemitism & anti-Muslim hate.”

Last week, the Board of Deputies had joined Tell MAMA in condemning Islamaphobia, when that group on May 8 rolled out a report on anti-Muslim bias in Britain.

Also Thursday, the Campaign Against Anti-Semitism and Faith Matters joined in calling on Britain’s Home Secretary, Sajid Javid, to ban a parade planned in London next month because it will include flags of the Lebanese terrorist group Hezbollah, the Evening Standard reported.

The parade is planned for Quds Day on June 10, when Iran’s theocracy has called on followers to condemn Israel’s capture of eastern Jerusalem in 1967. Hezbollah is an ally of the Iranian regime.

Quds day, the Jewish and Muslim groups said, “is a rallying point for anti-Muslim bigots who wish to portray all British Muslims as terrorist sympathizers, and for anti-Semites, who admire Hezbollah’s stated mission to seek out and murder Jews around the world.”