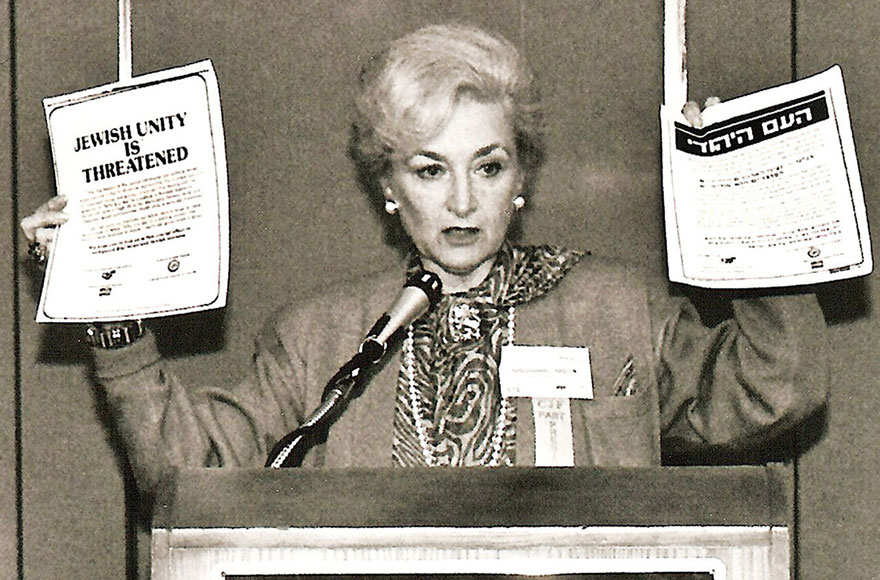 (JTA) — Shoshana Cardin, a Baltimore philanthropist who was the first woman to chair her city’s Jewish federation, the national umbrella body of the Jewish federation movement and the powerful Conference of Presidents of Major American Jewish Organizations, has died.

Cardin, who was in failing health in recent years, was 91, according to JmoreLiving.com.

Known for her intellect and leadership capabilities, she was from 1988 to 1992 chairwoman of the National Conference of Soviet Jewry, during a time when the priorities of the Soviet Jewry movement shifted from campaigns to free Soviet Jews to efforts to help resettle them in Israel.

Prior to that she was president of the Council of Jewish Federations, the representative body of 200 community federations in the United States and Canada.

Cardin also gained prominence in the autumn of 1988 for spearheading opposition to efforts in the Israeli Knesset to amend the Law of Return.

The so-called “Who Is a Jew” amendment, which would have denied Israeli citizenship to immigrants whose conversion to Judaism did not meet Orthodox standards, was ultimately withdrawn in the face of overwhelming pressure from American Jews.

Born Shoshana Shoubin to Latvian parents in what was then British-controlled Palestine, Cardin arrived at age 2 in Baltimore, where she later became active in local Jewish affairs.

One of her first major leadership roles in the Jewish community was as president of the Federation of Jewish Women’s Organizations of Maryland from 1965 to 1967.

She was the first woman to chair the Associated Jewish Charities and Welfare Fund of Baltimore, and she served on the boards of the American Jewish Joint Distribution Committee, United Israel Appeal and United Jewish Appeal,

She was also president of the Jewish Telegraphic Agency from 1999 until 2001.

According to the Jewish Women’s Archive, she earned a B.A. in English at the University of California, Los Angeles, after three years at Baltimore’s Johns Hopkins. She married Jerome Cardin, an attorney, real estate developer and first cousin to the current Democratic U.S. senator from Maryland, Benjamin Cardin. She taught school in the Baltimore public school system.

“Pregnant women were not allowed to teach, so Cardin quit when she was expecting the first of her four children: Steven, Ilene, Nina, and Sanford,” according to the JWA.

In addition to her involvement in Jewish affairs, she was heavily involved in state civic politics, serving in 1967 as a delegate to Maryland’s Constitutional Convention, and from 1974 to 1979 as chair of Maryland’s Commission for Women.

In December 1990, she was elected to head the Conference of Presidents of Major American Jewish Organizations, at a time when the umbrella body was working to secure Israel’s position with the U.S. administration, a task complicated by President George H.W. Bush’s struggle to maintain good relations with the Arab partners in his international campaign to oust Iraqi troops from Kuwait.

She was conference chair when, in November 1991, Bush offered what she described as a heartfelt apology for making statements that September that were perceived by the Jewish community to be a direct attack on the pro-Israel lobby.

Earlier that year, Jewish groups had been upset over his tough stand on an Israeli request for U.S. guarantees covering $10 billion in loans needed for immigrant resettlement. Referring to some 1,000 pro-Israel activists who had arrived in Washington to lobby on behalf of the loan guarantees, Bush angered critics by saying in September that he was one “lonely” guy “up against some powerful political forces.”

Cardin, who met privately with Bush prior to the larger meeting two months later, said she and the other Jewish leaders felt encouraged by the president’s sincerity and good will.