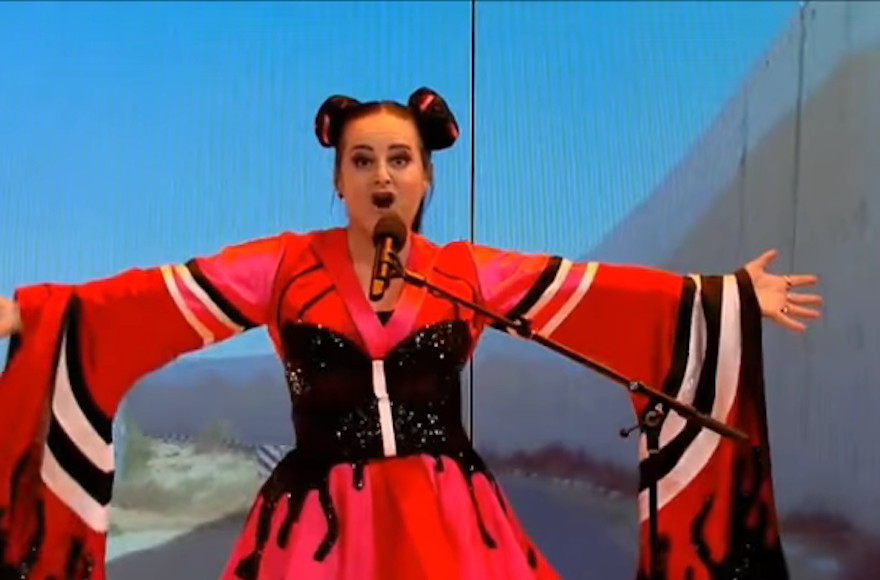 The parody of the song “Toy” by Netta Barzilai was aired Sunday on a program hosted by  comedian Sanne Wallis de Vries.

The parody, aired on the public BNNVARA network, featured standard left-wing criticism of Israel’s military and its treatment of the Palestinians, including a Netta impersonator singing “I hunt Palestinians through the curtains.”

The Center for Information and Documentation on Israel, or CIDI, which monitors anti-Semitism and anti-Israel vitriol in Holland, suggested the lyric was an anti-Semitic trope about Jews and money.

“You start with Israel and end with what? Jews and money. You made your point, BNNVARA,” CIDI wrote on Twitter.

Sanne Wallis de Vries and BNNVARA have not replied to requests for comment by CIDI and others on social networks.

Zev Edgar, a Jewish events professional from Amsterdam, called the sketch “anti-Israel” and “disgusting,” adding that it amounted to anti-Semitism aired by a public broadcaster. Mariette Groenenboom, a teacher from Amsterdam, said she would cancel her subscription to BNNVARA over the sketch.

Other Twitter uses supported the parody. One, Fedde Pruiksma, ‏encouraged de Vries to “not buckle” under pressure and allow herself to be “muzzled.”

In 2012, the Vara network, which in 2014 merged with BNN, faced allegations of “blood libel” when it aired a parody of a speech by Israeli Prime Minister Benjamin Netanyahu which had been manipulated to have him say in a seamless and realistic-looking speech: “We are trying to maximize the number of civilian casualties. We prefer that.”

Headlined “Netanyahu finally tells the truth,” the video goes on to show Netanyahu saying: “We are conducting these surgical operations against schools, mosques, hospitals, children. This is something I don’t have to explain to Americans.”