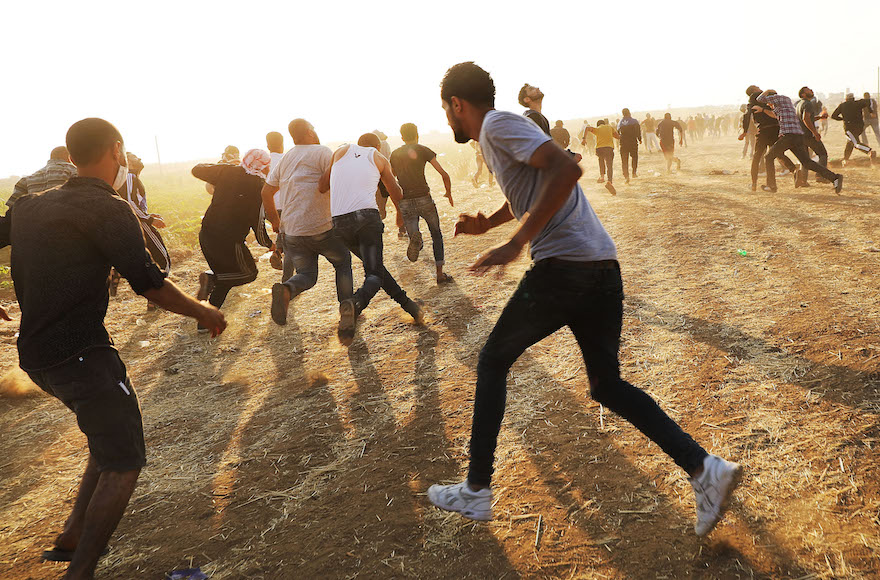 Protesters running near the border fence with Israel, May 15, 2018. (Spencer Platt/Getty Images)
Advertisement

(JTA) — Students at a selective New York City public school participated in a moment of silence for the Palestinian victims of violence on the Gazan border with Israel, angering some parents.

The moment of silence was held a week ago at the Beacon School located in the Hell’s Kitchen area of Manhattan. The school “tends to lean left,” the New York Post reported over the weekend.

Some Jewish parents told the Post that they were unhappy that the school got involved in the Israel-Palestinian conflict.

“I am extremely upset because I did not send my child to a New York City public school to pray for Hamas operatives,” one father told the newspaper.

“I just don’t think any school should be promoting a moment of silence for terrorists. What if it was Islamic terrorists in ISIS?” said the Jewish mother of another student.

A Jewish student told the newspaper that some of her Jewish friends “got very weird when the moment of silence started.” Sophie Steinberg, a junior from Brooklyn, said: “They don’t know how to feel. They don’t know how to fit into all of this.” She said she was not surprised by the moment of silence. “I think that’s Beacon’s nature — to not be divisive but to bring up the things that no one wants to talk about,” she told the New York Post.