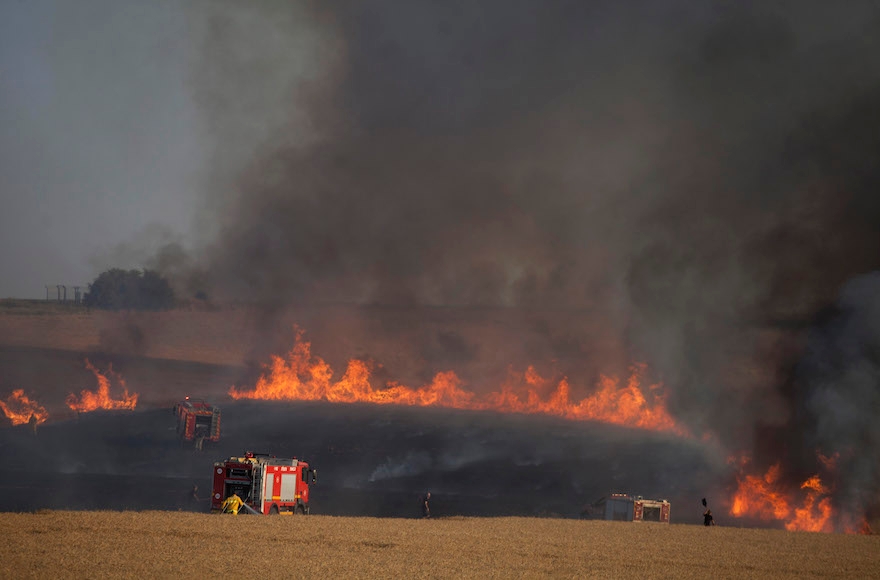 Israeli fire fighters and soldiers attempting to extinguish a fire in a wheat field next to the border with Gaza, May 15, 2018. (Lior Mizrahi/Getty Images)
Advertisement

JERUSALEM (JTA) — A group of Gazan Palestinians cut through the border fence with Israel and set fire to an empty Israel Defense Forces outpost.

The Palestinians, 10 in all, fled back through the fence into Gaza after the Tuesday morning attack on the outpost used by snipers during the March of Return border protests.

The IDF said that it had monitored the group since it began its approach to the fence.

In response, an IDF tank later on Tuesday morning targeted a Hamas observation post in the southern Gaza Strip. No injuries were reported, according to the IDF.

In late March, three Palestinians who breached the border fence with Gaza were arrested near the Tzeelim army base in southern Israel, more than 12 miles from the border. They were carrying knives and grenades. Just days before that breach, four other Palestinians crossed from Gaza into Israel where they set fire to military equipment.

Also on Tuesday morning, Palestinians in the West Bank opened fire on cars with Israeli license plates, according to the IDF. No one was injured in the attack near Ramallah, but the tire of a car was blown out in the attack.