Hasidic volunteers, kicked out of a major NY hospital, blame a clash over medical ethics 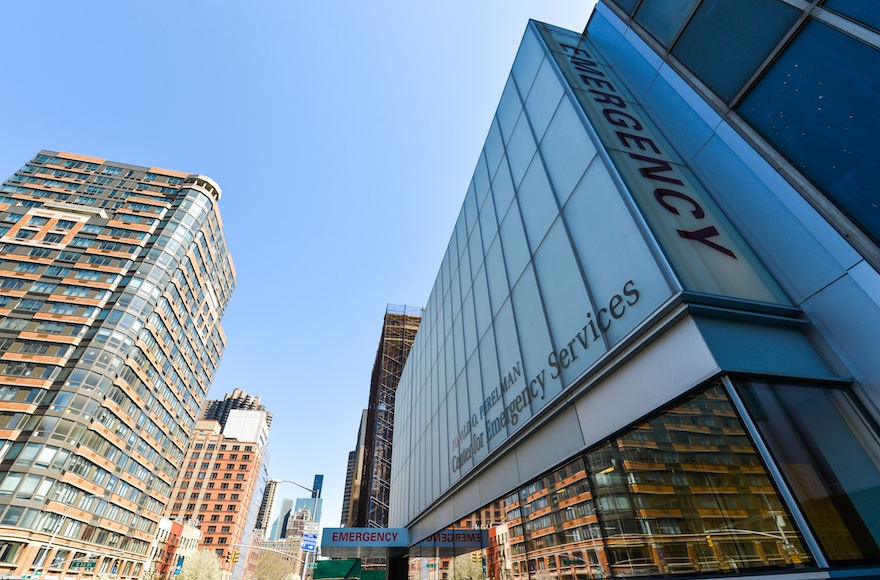 NEW YORK (JTA) — For years, volunteers from the Satmar hasidic movement have fanned out daily across the city, boarding private buses and carrying bags full of kosher food cooked each morning (except Saturday) at the organization’s commercial kitchen in Williamsburg, Brooklyn.

But at one of New York City’s largest and most-respected hospitals, NYU-Langone Hospital in Manhattan, the volunteers are no longer welcome. The hospital now bans all non-family-members and friends from patient floors.

“For the safety and privacy of our patients, we have limited outside volunteers, vendors, delivery people and other non-visitors and staff from going directly onto patient floors and into patient rooms,” NYU-Langone spokeswoman Lisa Greiner said in a statement. She did not respond to a question, repeated multiple times, about what specifically prompted the policy change.

Greiner said that the policy isn’t specific to Satmar Bikur Cholim, though members of the group insist it is. They say that the NYU health system’s approach to end-of-life care has changed and conflicts with the Orthodox Jewish approach to issues surrounding ending life support and administering palliative care — and the hospital doesn’t want observers witnessing decisions that to Orthodox eyes may fall short of extending life by any means available.

Satmar Bikur Cholim supporters are now urging Jews to steer clear of the hospital and are threatening to start a formal boycott, said the Bikur Cholim director, who did not want to be named.

The hospital today is “almost like a legal killing machine,” she said. Since its founding in 1952 Satmar Bikur Cholim has refused to speak with media outside of the haredi Orthodox community. They consider the current conflict such a crisis that now they are willing to, she said.

Over the three-day holiday that included Shabbat and Shavuot this week, circulars widely distributed in Brooklyn Orthodox neighborhoods warned that Jewish patients would be risking their lives by going to NYU-Langone. The main NYU-Langone hospital is located on Manhattan’s East Side and is a quick drive from haredi neighborhoods like Williamsburg, the headquarters of the Satmar community.

“Our patients are in danger when they go there,” said the Satmar Bikur Cholim director.

Earlier this year, when the hospital instituted its new policy barring volunteers from patient floors, the five or six Satmar Bikur Cholim volunteers who have long gone each day to NYU-Langone tried slipping past security guards with fresh-cooked kosher food hidden inside Macy’s shopping bags. But they were followed into elevators and most recently stopped at the hospital’s front doors.

They group serves anyone who calls and most of their recipients are not Hasidic, said the Bikur Cholim director.

A 950-member group called the Rabbinical Alliance of America wrote a letter to NYU-Langone’s leadership requesting that it find a way to allow Satmar Bikur Cholim to continue its work. It has received no response, said Rabbi Mendy Mirocznik, the RAA’s executive vice president.

Greiner noted that NYU-Langone has “bikur cholim rooms” stocked with kosher food in its main Manhattan hospital and its Brooklyn hospital, and is in the process of building one at its orthopedic hospital in Manhattan. (“Bikur cholim” is Hebrew for “visiting the sick.”)

It also has Jewish chaplains and four or five people it calls liaisons to the Jewish community.

“We always have and will continue to address the cultural and religious needs of the communities we serve. If any family cannot visit the Bikur Cholim room, our volunteers deliver food directly to them consistent with their medical condition. Most of the community and outside organizations understand and agree with this policy, but a few volunteers want unsupervised access to patient floors and rooms and have tried to distort the truth,” Greiner wrote in an email.

Rabbi Meyer Leifer, the Orthodox Jewish community liaison listed by NYU-Langone for its Brooklyn hospital, declined to be interviewed, referring a reporter to Greiner.
Greiner did not respond to a request for the names of the Jewish liaisons at its main hospital, and that information was not found on its website. The Satmar Bikur Cholim director said that they have had a longstanding relationship with NYU-Langone’s Orthodox Jewish chaplain, but suddenly he has stopped returning their calls.

“We weren’t asking for anything more than to be able to continue our mission,” she said. “Why can’t we continue doing what we’ve been doing for 70 years? It’s his clients who are asking for it.”

JTA’s request to speak with Brotman was declined by Greiner. 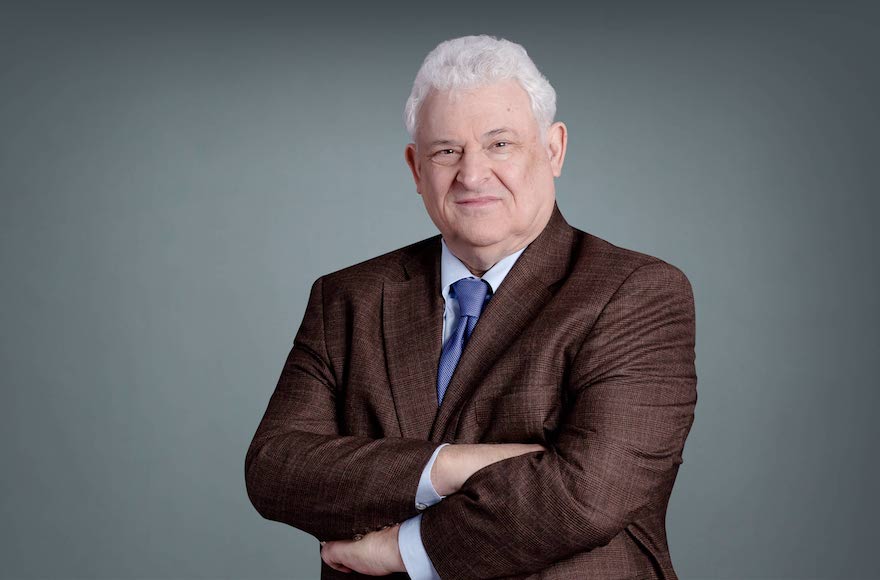 The Satmar Bikur Cholim director says that the policy change “had to do with our advocacy in the hospital. Because we’re very big in patient care management and advocacy, the hospital did not like that we’re watching them so closely. NYU Hospital’s policies have changed and have become more difficult for the Jewish community.

“Our advocacy has gotten more intense,” she said. “We’re very much pro-life and life being respected. Currently the hospital has initiated hospice and end-of-life care which goes against our community’s halachic perspective. It comes up very often, weekly and sometimes daily where people call us with feeding tube issues or ventilator care.”

Although halacha, or Jewish law, is complex when it comes to end-of-life issues, it essentially includes the premise that as long as the heart continues beating, a patient is considered alive. That brings Jewish law into conflict with medical professionals who want to remove brain-dead patients from life support or to not introduce a feeding tube for a terminally ill patient who is considered close to death.

For example, said the Bikur Cholim director, “above a certain age, over 60 you won’t get a feeding tube no matter what” from NYU-Langone physicians who say the patient’s situation is irreversible.

The hospital said disagreements over end-of-life did not play a role in the new policy.

“The issue IS actually about visitors or volunteers being allowed to bring in food,” Greiner wrote. “Volunteers are not there to listen to or weigh in on medical decisions made by the physicians. That information is only for the patient or their families. This has nothing to do with the issue.”

Scott Seskin, a medical malpractice and personal injury lawyer who is representing the Satmar Bikur Cholim, rejected the hospital’s explanation.

“The problem is that the interests of the patient and the community aren’t aligned with the interests of the hospital. They don’t want to have the patients influenced by the Satmar Bikur Cholim,” said Seskin. “They want to be able to control the narrative and have family and patient follow their instructions so things go the way they want them to go. They’re using the food and visitation as the predicate for keeping them out, but that’s not what this is about.”

Seskin and others suggested the Orthodox community could hurt the hospital by boycotting it.

“I would not be comfortable to go there as long as this question [of why the policy changed] remains unanswered,” the RAA’s Mirocznik told JTA. “The frum [Orthodox] community is very close knit and word travels faster than the internet. News gets from one corner of Borough Park to Lakewood in 20 minutes,” he said, referring to haredi Orthodox communities in Brooklyn and New Jersey.

NYU-Langone is one of the largest hospitals in New York City, with 27,000 inpatient visits, nearly 127,000 outpatient visits and 42,000 patients in the emergency room at its main hospital on Manhattan’s First Avenue, in 2017, according to the New York State Department of Health. NYU-Langone has other hospitals in its network, including the orthopedic Hospital for Joint Diseases, Bellevue Hospital and the branch in Brooklyn. Altogether, NYU hospitals had close to 70,000 inpatient stays in 2017.

A Jewish chaplain at another area hospital suggested that members of Bikur Cholim may themselves have crossed a line between providing information and interference. “How much are they [the volunteers] advocating or how much are they advising?” the rabbi asked.  “I have heard internal complaints [from medical staff at the chaplain’s hospital] that it goes into this other realm, around end-of-life care, that when someone recommends palliative care it’s considered contrary to halacha.”

Disagreements over end-of-life care point to a conflict between the decisions doctors sometimes make — based in part on a patient’s quality of life and the hospital’s use of resources — and the premium halacha places on preservation of life.

“Our technology has advanced to the point where it is getting harder to die in the ICU,” said Dr. Kenneth Prager, a pulmonologist and head of medical ethics at Columbia University Medical Center, also in Manhattan.

“It raises questions of resource utilization, family distress, the moral distress of caregivers, and the suffering of the patient,” said Prager, who himself is an Orthodox Jew.

“There is a major, major ethical challenge that has developed over the last decade. Futile care was never a major factor in bioethics,” said Rabbi Moshe Tendler, a world-renowned Orthodox medical ethicist and dean at Yeshiva University. “These are major challenges to what has been until relatively recently a consensus. The halacha [Jewish law] and the current practices in America were pretty well in line with each other. Now they’re at variance. Under the guise of some kind of hospice care patients are being removed from active treatment and being allowed to die months in advance.”

But Prager said that continuing active treatment is not always the clear-cut moral choice.

“A common example is inserting a feeding tube into a patient with end-stage dementia who has lost the ability to swallow. Will this patient ever recover? He won’t. But is it starving a patient to death by denying him a feeding tube [the Orthodox Jewish perspective] or causing the patient additional suffering by prolonging his death — which is a more conventional modern perspective? Medical ethics consultations are often sought in cases like this,” Prager said.

The conflict in values isn’t limited to Orthodox Jews, but comes up for African-American, Hispanic and Asian patients too, he said.

“People of other religions and nationalities feel very strongly that depriving people of nutrition and hydration in such circumstances is unacceptable,” said Prager, adding that he gets called in on cases like this 12 to 15 times a month. “How to mediate these issues can become very sensitive.”

Dr. Arthur Caplan, director of the division of medical ethics at NYU-Langone, agreed that “we’re adding more interventions … various drugs can be introduced to control infections people used to die from and control blood pressure. There are more choices to be faced.”

However, said Caplan, doctors today bend over backwards to accommodate the wishes of a patient or their family members.

“Doctors are more deferential to patients than they used to be,” said Caplan, perhaps the country’s best-known medical ethicist. “There’s misapprehension on the part of many doctors that they have to do what the patient wants. We got doctors to listen to patients but it’s swung toward ‘I can’t even challenge a patient’ or disagree with a patient.”

He isn’t familiar with his employer’s fight with Satmar Bikur Cholim, Caplan said, but in terms of end-of-life care, “there’s nothing outlandish about what this hospital does.”

What it comes down to, say some, is the incalculable value to a patient’s health of freshly prepared soup and a kind word.

“Read the medical literature just this last year, what emphasis is being placed on the psychological welfare of the patient as it impacts the disease,” Tendler said. “Anyone who sees these gentle women going around with the chicken soup and how careful they are to offer the patient nothing more than concern for his welfare cannot deny that this is a tzedakah [act of goodness], a chesed [act of kindness], and it’s also medical assistance to the patient.”

“The idea of moving away from this wonderful humane service,” said Tendler, “I can’t imagine why NYU would consider it.”