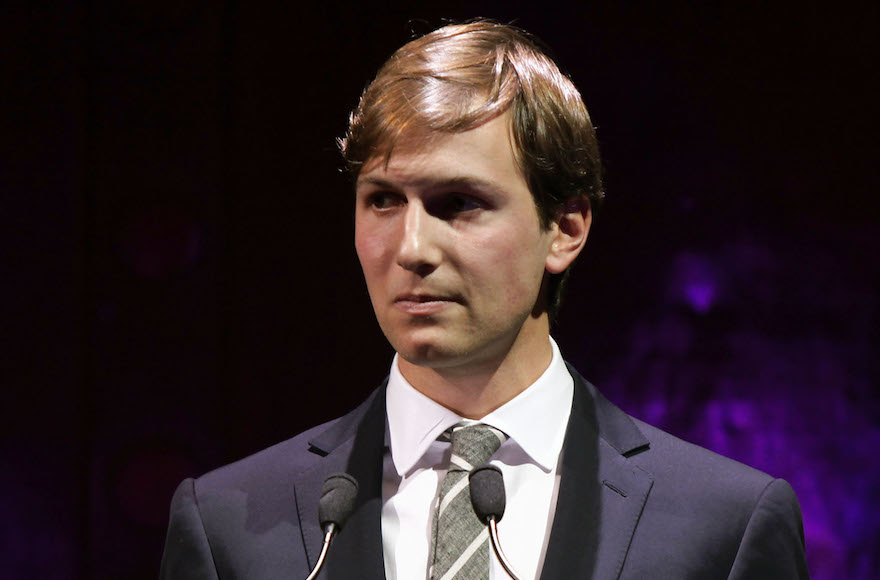 WASHINGTON (JTA) — Jared Kushner is skipping the 15th anniversary of his graduating class at Harvard, and that may be a good thing — considering what some fellow Harvard alumni are writing about him ahead of the reunion.

Ben Wikler, the Washington director of MoveOn.Org, the liberal social action group (and like Kushner a Harvard class of 2003 grad), recently shared some of the entries from Harvard’s “Red Book” — it’s a Harvard tradition for alumni to submit notes about themselves ahead of reunions, Wikler noted on his Twitter feed.

The upcoming reunion starts this Thursday, and some of the Red Book notes weren’t kind to the president’s son-in-law and adviser.

“I never imagined a resurgence of Nazism as I grew up, the secure granddaughter of Holocaust-fleeing German immigrants,” one said. “Mostly, I feel a low-grade, constant horror as I watch attacks on refugees, minorities, my most at-risk patients, women’s rights and the environment, and new threats of nuclear war. Our classmate Jared Kushner surely knows that climate change is real and yet he watches as regulations are dismantled daily. Shame on you, Jared Kushner.”

Jared Kushner didn’t send in a note for Harvard’s 15th Anniversary Report. But flip to the page where his entry would go and you’ll find this, the end of a note from an alphabetically adjacent classmate. pic.twitter.com/HgN7wbPl9p

Wikler posted another five with pretty much the same message and only slight variations in tone, ranging from the outraged to the sarcastic.

“I, for one, am actually relieved that our class of ’03 has a real, live fascist among us,” said Jon Sherman, also the descendant of Holocaust survivors. “Who says Harvard isn’t diverse!”

Kushner, who used to be a Democrat, was vice president of the campus Friends of Chabad and played Junior Varsity Squash. He is now best known for fathering the grandchildren of the man liberal America loves to hate.

The Boston Globe obtained a copy of the Red Book and found some more Jared jibes, although it noted that out of 1,600 members, the number of such protests was relatively small.

Still, among those who did register protests, many appeared to be Jewish. Chanda Prescod-Weinstein, who also wrote “Shame on you” in her entry, was prompted in part by Kushner’s appearance last week at the opening of the new U.S. embassy in Jerusalem while Israeli troops killed some 60 Palestinians attempting to breach the fence between Israel and the Gaza Strip.

Don’t look out for the Kushner entry — the first son-in-law did not submit one.