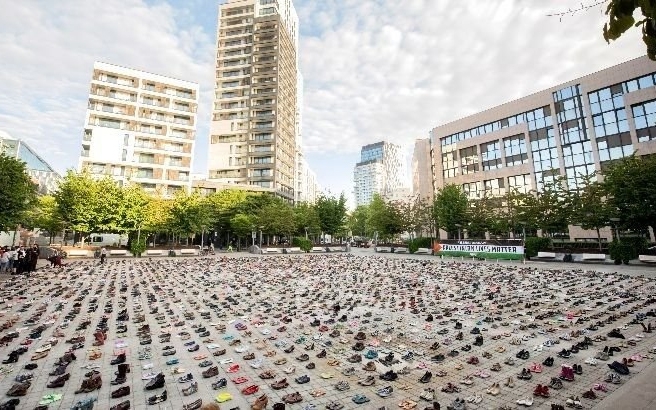 (JTA) — Pro-Palestinian activists placed 4,500 pairs of shoes outside the meeting place in Brussels of European Union foreign ministers to protest Palestinian deaths since 2008.

The protest action, organized by the Avaaz group, covered Jean Rey Square with shoes, donated by citizens across Europe over the last week ahead of the Council of the European Union meeting in Brussels Monday. The organizers placed a banner reading “Palestinian lives matter” along the middle section of a Palestinian flag.

Some 4,500 people, including many dozens of Israelis, died in hostilities between Israel and Palestinians since 2008.

The Avaaz group said its initiative was a “growing call for EU governments to protect Palestinian lives by reining in Israel’s government violence.”

Critics of the initiative, including Nicole Seekles, a supporter of Israel from the Netherlands, wrote on Facebook that the display was inappropriately evocative of the heaps of shoes on display at the Nazi former death camp of Auschwitz-Birkenau in Poland.

Others noted that the protest included no mention of the nearly 4,000 Palestinians who have died in the Syrian civil war that erupted in 2011, mostly at the hands of the forces of Bashar Assad in the government’s war on Sunni Muslims.