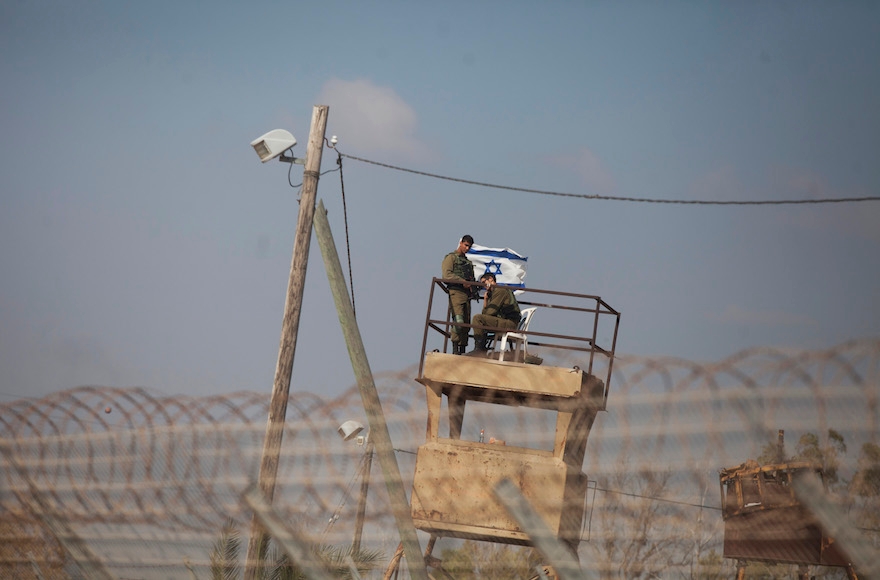 Israeli soldiers standing watch on the fields of Nahal Oz on the Israeli Gaza border, near the Gaza neighborhood of Shajaiya, May 15, 2018. (Lior Mizrahi/Getty Images)
Advertisement

(JTA) — Rocket sirens continued to sound in Israel despite earlier reports that Egypt had brokered a cease-fire between the Jewish state and terror groups in Gaza.

On Tuesday, Israeli media outlets reported that Egypt had brokered the agreement following the firing of at least 50 rockets and mortar shells from Gaza into Israel that day.

However, the sirens continued to sound following the reports and the Israeli army said it was continuing to carry out airstrikes, The Times of Israel reported. An Israeli army official also reportedly denied that a cease-fire agreement had been reached.

One of the shells fired Tuesday exploded in the yard of a kindergarten in southern Israel shortly before students were set to arrive.

In response to the largest number of projectiles fired on Israel from the coastal strip since the 2014 Gaza war, the Israeli army said it struck more than 35 targets belonging to the Hamas and Palestinian Islamic Jihad terrorist organizations in Gaza. Among the targets was a terror tunnel that stretched under the Kerem Shalom border crossing for humanitarian goods, as well as weapons storage sites, naval targets and a terrorist headquarters.

The last two months have seen unrest on the Gaza border, with deadly clashes between Israeli troops and Palestinian protesters. At least 60 of the  protesters were killed this month. Hamas had urged people to storm Israel’s border.