A pro-Israel activist dates a far-left celebrity, and the Dutch go bananas 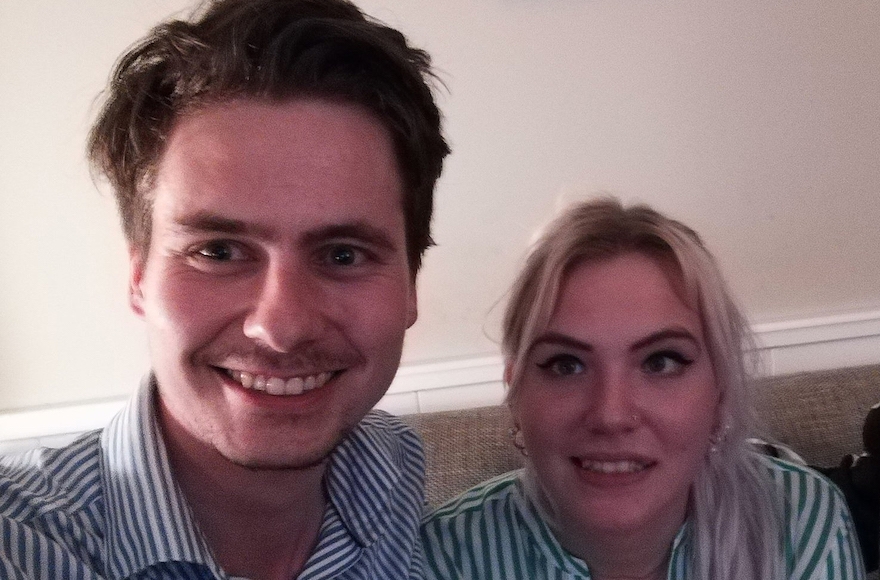 A Dutch couple in their 20s, they have different dress styles — he has a clean-cut look and tends to wear suits, she has a nose ring and favors ripped jeans — but at first glance they seem like a good match: Both are articulate, ambitious, intelligent and good-looking. They apparently are deeply in love with each other.

But Dekker and van der Bas are not like other couples.

For one thing Dekker, who is Jewish, is probably the best-known far-left activist in the Netherlands and has expressed support for the movement to boycott Israel. And Van der Bas, who is not Jewish, is a longtime employee of Holland’s leading pro-Israel lobbying group and member of an anti-immigration party that many on the left call a racist, far-right movement.

In Holland’s polarized society, the couple’s Romeo and Juliet story is grabbing headlines in the national media as a sign of love’s ability to transcend even the deepest ideological divisions. But it has also exposed them to vicious attacks by extremists who see their relationship as betrayal.

“We disagree on many things, but we have a lot in common: We like arts, we care about social issues, we’re both doers,” van der Bas, who works as a policy adviser for the Center for Information and Documentation on Israel, or CIDI, told JTA. “We don’t constantly talk politics. We do all the stuff that normal couples do.”

Of course, most normal couples in the Netherlands aren’t on the front cover of Metro, the country’s second-largest circulation daily, as Dekker and Van der Bas were last month under the headline “Love between Left and Right.” Their affair also was profiled last month by the country’s fourth-largest newspaper, the highbrow Volkskrant daily.

Above all, though, most couples when they go public don’t inspire such torrents of hate messages on Twitter that their relationship becomes one of the country’s top 10 trending topics, as happened to Dekker and Van der Bas in April.

Part of the intense interest is because “we’re living in a polarized society with an us vs. them mentality,” said Van der Bas, 25, a member of the Forum for Democracy rightist party. “I believe that 20 years ago, two young people falling in love from opposite ends of the political spectrum wouldn’t have been so unusual.” 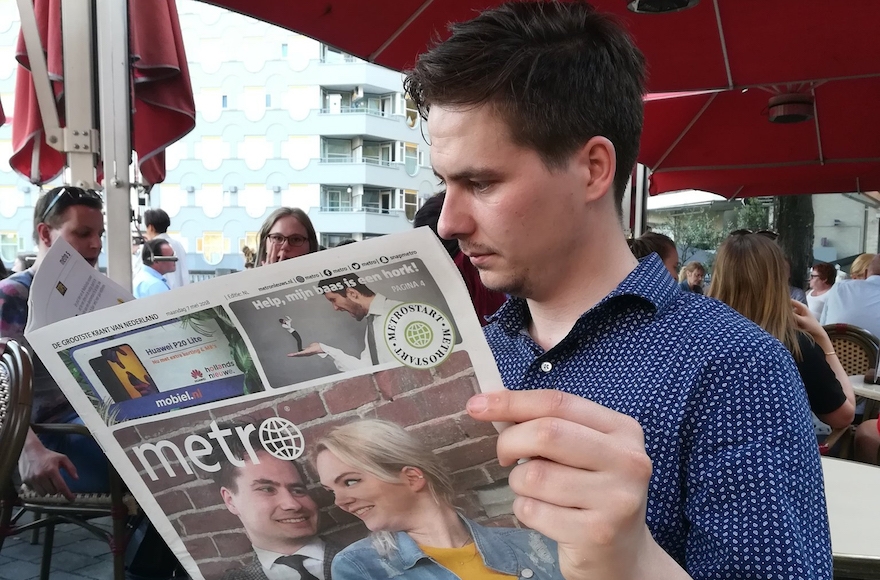 Paul van der Bas reading a Dutch newspaper featuring an article about him and Dekker, May 7, 2018. (Courtesy of Anne Fleur Dekker)

While that may be true, the 24-year-old Dekker isn’t just a left-wing activist. Over the past year, she has become not only a prominent member of far-left circles, but their poster child. Volkskrant called her “the pet enemy of right-wing Netherlands.” The GeenStijl news site labeled her “Holland’s best-known Twitter hooligan” and “the radical granddaughter of Pol Pot and Naomi Klein,” the Canadian activist.

She had earned her stripes in left-wing circles in 2017 after inviting her 23,000 Twitter followers to join her and “throw 500 stones” at Geert Wilders, the leader of the far-right Party for Freedom.

“I think it’s an honorable action,” she added.

The tweet referenced a far-right supporter’s call on Twitter to stone mosques. But it was widely seen as a call for violence against a politician who is under constant police protection because of countless death threats made against him for his anti-Islam rhetoric.

Wilders, whose party is the country’s second largest, filed a police complaint last year charging Dekker with incitement to violence, unleashing thousands of death threats against her by his supporters. Police advised Dekker to go underground for a few weeks because of the threats, making her a prime time news item and a star in radical left-wing circles.

“I grew up with the notion that the Netherlands was a safe place. Suddenly that appeared not to be the case; a wake-up call,” Dekker told Volkskrant.

An only child whose parents went bankrupt in 2008 and divorced, Dekker said she was diagnosed recently as suffering from post-traumatic stress disorder because of the upheavals in her life after tweeting about Wilders. She also told Volkrant that she was the victim of date rape in 2013.

Dekker said her mother “suffered terribly” because of the threats. And her father, whom Dekker had not seen in two years, has since cut off all communications with her.

Through the ordeal, she grew closer to van der Bas, with whom she had had contact on a WhatsApp group for young opinion shapers from across the political spectrum. They fell in love in April. Dekker told Volkskrant that that she was “doing very badly all of a sudden, and he was an enormous source of support.”

She has written on Twitter that she is “so in love it should be illegal.” She also wrote in April: “I have never been able to feel so free and myself in a relationship.”

But getting there took some adjusting, she acknowledged.

“I was attracted to him but found it difficult to admit it, also to myself,” Dekker told Volkskrant. “Because here was a Forum for Democracy member, and an active one at that, who knew [Thierry] Baudet a bit,” she said, referring to the party’s leader. “It felt forbidden.”

Months earlier, Dekker and van der Bas were exchanging barbs in the media. Dekker had been invited to speak at an event commemorating World War II victims. Dekker made waves at the event as an occasional supporter of the Boycott, Divestment and Sanctions movement against Israel — last year she tweeted “I do as much BDS as possible” — and for saying that Dutch Jewry’s main watchdog on anti-Semitism had no place at a Holocaust commemoration ceremony.

Van der Bas told the PowNed right-wing news site in November that Dekker’s ignorance, as he described it, means she should stay on Twitter instead of “abusing a memorial ceremony.”

But Israel “is not a big issue” for Dekker, said van der Bas, who adopted Israel’s cause as a student and once dated an Israeli.

“I don’t know if I could be with someone who hated Israel,” he added. Dekker has said she no longer subscribes to the BDS movement.

Now the couple post joint greetings on Twitter. Van der Bas accompanied Dekker to a Labour Day parade on May 1. She accompanied him later that month to a book launch by Baudet, the right-wing politician.

But coming out as van der Bas’ girlfriend last month exposed Dekker to new waves of hatred – this time from the left, where many felt that she was a traitor for sleeping with the enemy, she told Volkskrant. She said about three-quarters of her former friends and acquaintances have turned their backs on her over the past year.

“Now I’m getting threats from people who used to be my crowd,” she told Volkskrant. Last month, she added, two “far-left activists” confronted her on her doorstep “and told me what they think of me. It may sound strange, but it feels worse than when I was attacked by the far right.”

Arzu Aslan, a well-known female activist against what she describes as racism, wrote on Twitter that Dekker “was turned because she’s getting right-wing” sex. (“So sexist,” Dekker, a feminist, told Volkskrant about that tweet. “Why wouldn’t I be able to determine my own convictions?”)

Amid the changes in her life, Dekker remains a left-winger, she told the daily. But she left the Green Left party, where she had been a leading figure in Hilversum, near Amsterdam. And she spoke out against anti-Semitic discourse by supporters of far-left groups. The International Socialists and Committee 21 groups said she was no longer welcome at their event because of those remarks.

“The extreme left has an anti-Semitism problem,” Dekker said, “but this cannot be mentioned.”

In April, the couple posed for a selfie and posted it on Twitter with the phrase “Have fun hating. We’re happy together.”