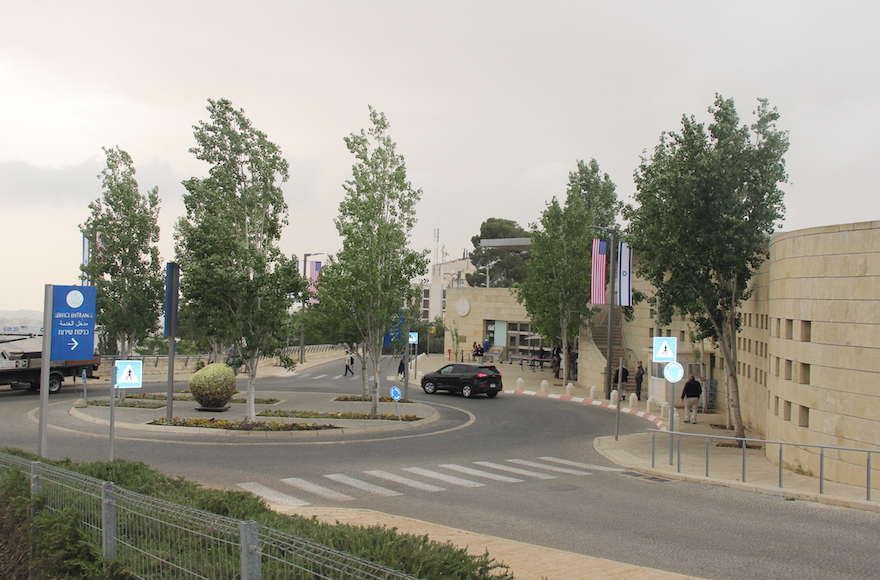 The U.S. Embassy in Jerusalem issued a travel warning saying that visiting Americans could be targets of “individuals and groups opposed to the Secretary of State’s recent announcement.” (Ben Sales)
Advertisement

JERUSALEM (JTA) — An eastern Jerusalem man was arrested for planning attacks on targets that include Prime Minister Benjamin Netanyahu and Jerusalem Mayor Nir Barkat, as well as the U.S. Embassy, on behalf of a terrorist cell directed from Syria.

Muhammad Jamal Rashdeh, 30, an Israeli-Arab citizen, was arrested in April and indicted last week, the Israel Security Agency, or Shin Bet, announced for the first time on Tuesday after a gag order on the case was lifted. Two other unnamed members of the terror cell were later arrested, according to the ISA.

In addition to targeting high-ranking Israeli officials, Rashdeh also planned to attack buildings that belong to the U.S. Consulate in Jerusalem, which is now the embassy, and a senior Canadian delegation that was visiting Jerusalem.

The cell also planned to bring a terrorist into Israel from Jordan to help advance the attacks, according to the ISA.

Rashdeh, on instruction from a terrorist in Syria that the ISA did not name, carried out advance operations to gather intelligence on possible targets. Rashdeh has spent time in an Israeli prison for what the ISA called “terrorist offenses.”