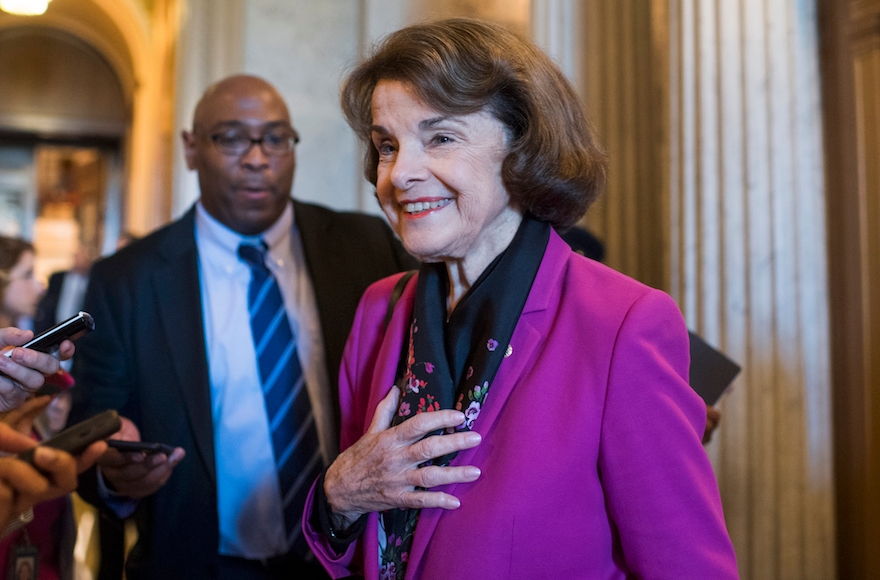 WASHINGTON (JTA) — Eight states, scattered across the continental United States, held what added up to the biggest primaries day this season.

The Wednesday snapshot for Jewish voters: Jewish incumbents appear safe for the most part, and the fretting about a far-right incursion into Republican precincts is overstated — but not entirely put to rest.

California has a “jungle primary”: The two top vote-getters on Tuesday go head to head in November, whatever their party. Democrats survived “lock-outs” — races where the abundance of Democrats vying for the nomination might have handed the two top spots to Republicans.

Jewish Democrats in the state did not face that concern: Dianne Feinstein, 84, who has been in office since 1992, is likely to be reelected in November. She garnered 44 percent of the vote; her closest rival was Kevin de León, a state senator and a Democrat, who got 11 percent of the vote.

Other California Jewish Congress members seem likely to be reelected:

Adam Schiff, the ranking Democrat on the U.S. House of Representatives Intelligence Committee and a perennial thorn in the side of President Donald Trump, got 72 percent of the vote in California’s 28th District, encompassing suburbs north of Los Angeles.

Brad Sherman, the ranking member on the House terrorism and Asia subcommittees and an outspoken proponent of impeaching Trump, cruised in the 30th District encompassing the San Fernando Valley.

Alan Lowenthal got 60 percent of the vote in the 47th District, which includes Long Beach.

Ron Cohen, a Republican whose father was Jewish, is unlikely to unseat incumbent Democrat Ro Khanna, who won 59 percent of the vote to Cohen’s 25 percent. Khanna’s 17th District is in Silicon Valley.

In April, Khanna, an Indian American, spearheaded a letter to the State Department calling on it to condemn Ukrainian legislation that they said glorifies Nazi collaborators. Cohen, a CPA, embraces Trump’s “America First” rhetoric and counts himself as a follower of former Rep. Ron Paul, R-Texas, a libertarian notorious for his associations with the far right. Cohen has cited his father’s Jewishness to defend himself against accusations that he is cozy with the far right.

Ted Lieu, a Democrat, also is likely to keep his 31st District seat, having won 61 percent of the vote. Lieu, who was born in Taiwan, whose district encompasses much of the coast of Los Angeles County, is one of a diminishing number of Democrats who take their cues on Israel from the centrist and right-wing pro-Israel communities.

The one Jewish incumbent who could face difficulties is Josh Gottheimer, a Democrat in northern New Jersey’s 5th District, who unseated a seven-term Republican in 2016. Gottheimer, who was uncontested in the primary, is a freshman in a district that could well swing right again. Heeding the substantial Orthodox Jewish community in the area, he is ones of the Democrats’ staunchest Israel supporters. He’ll face John McCann, a lawyer who won the Republican nod.

Frank LoBiondo, a Republican, is not running again in New Jersey’s 2nd District, in the state’s south. Democrats, who hope to retake the House in November, see it as a possible pickup. Jeff Van Drew, a conservative Democratic state senator, got his party’s nomination, while Seth Grossman, a former Atlantic City councilor who ran a quixotic primary challenge against former Gov. Chris Christie in 2013, is the Republican. Grossman, a lawyer who won what the Press of Atlantic City called a “stunning upset” over businessman Hirsh Singh, told Ballotpedia that his favorite holiday was Passover.

“It brings friends and family together with good food, beverages, company, and conversation, but also teaches important lessons,” he said.

The media made much of an outlier poll showing Patrick Little, an avowed neo-Nazi, coming in second to Feinstein. In the end, Little came in 12th with 1.4 percent of the vote — but that’s 54,000 Californians who thought it was okay to vote for a candidate who says American Jews face a “harsh reprisal” for their nefariousness.

Ditto for John Fitzgerald, who came in second in the 11th District. Fitzgerald got 25 percent of the vote to incumbent Democrat Mark DeSaulnier’s 69 percent — but he’s still on the ballot in November, he still got 24,000 people voting for a candidate who insists that Jews in government have dual loyalties and he came in ahead of two other candidates, a Democrat and an Independent.

The state and national GOP have disavowed Little and Fitzgerald. Similarly, the Illinois state GOP disavowed two far-right extremists in that state who garnered Republican nominations in districts the party deemed unwinnable.

In Montana, the Republican establishment is backing Matt Rosendale after he won his bid to challenge incumbent Sen. Jon Tester, a Democrat seen as vulnerable in a state where President Donald Trump is popular. Trump has declared a vendetta against Tester for raking his nominees over the confirmation coals. Trump’s son, Donald Jr., took to Twitter Wednesday morning to say he is ready to campaign for Rosendale.

Rosendale, the state auditor, has flirted in the past with right-wing extremists, although he has subsequently disavowed them and has since made a point of embracing the state’s tiny Jewish community, which has been threatened by neo-Nazis. He ran as Trump’s man in the state — “build that wall,” referring to Trump’s plan to build a wall along the Mexican border, was one of his slogans.