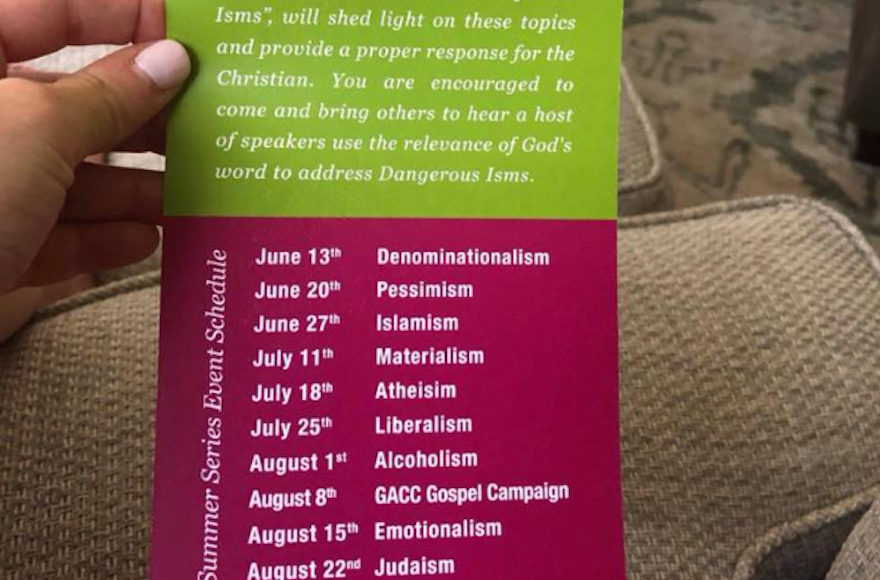 (JTA) — A Dallas-area church has included Judaism among “dangerous isms” that includes liberalism, alcoholism and pessimism.

The items, defined in a flier as “a distinctive practice, system or ideology,” will be discussed as part of the Greenville Avenue Church of Christ in Richardson, Texas summer lecture series. The lectures will “shed light on these topics and provide a proper response by the Christian,” the promotional material said.

Minister Shelton Gibbs III defended the series at the church.

“We’re not here to criticize or be antagonistic toward people and to beat them down,” he told the Dallas News. “There’s no threat. The people in the community should not feel a threat.”

The church has been attacked on social media for appearing to equate Judaism with some of the other items on the list. Islamism also appears on the list. One social media user said on Twitter he had filed a complaint with the IRS, in order to threaten its tax-exempt status.

Several Muslim and Jewish leaders in the Dallas area offered to meet with Gibbs and other members of the church’s leadership in an effort to jumpstart a dialogue.

Wow. Judaism & Islaminism (is that even a word?) get equal footing in the 'things that are dangerous' category as being a materialistic alcoholic. Way to spread those loving, caring gospels of Jesus, Greenville Avenue Church of Christ! #hypocrites @TheGoodGodAbove #shameful pic.twitter.com/lPoQdhHAii

Golly, bigots at the Greenville Avenue Church of Christ are feeling bold enough to put Judaism on a list of dangerous isms. https://t.co/vYHmtGYNyY