4 Palestinians killed, 600 injured in latest round of Gaza border clashes 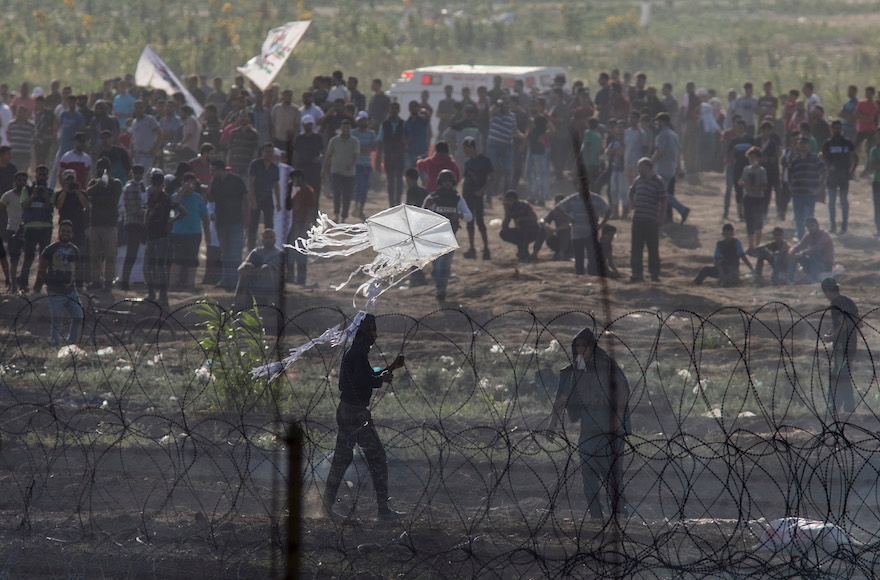 (JTA) – Four Palestinians were killed and at least 600 were injured in the 11th straight week of protests on the Gaza-Israel border.

The dead include a 15-year-old, Haytham Muhammad Khalil Aljamal, according to The Times of Israel, citing reports from the Gaza Health Ministry. Most of the injured were lightly wounded, and more than 100 were injured by gunfire from the Israel Defense Forces.

In total, more than 110 people have been killed in the clashes between the IDF and protesters.

The Israeli army said that Palestinian protesters again attacked Israeli territory with incendiary airborne objects, including kites and balloons, that have caused widespread fires on the Israeli side of the border this week. The army also said that Palestinians threw grenades and other explosives into Israel, along with burning tires on the Gaza side of the border fence.

Some 10,000 demonstrators showed up this week, a far lower turnout than at the protests’ peak on May 14, when 50,000 Palestinians massed on the border and 60 were killed by Israeli troops. (Hamas, the Islamist terrorist group that governs Gaza, said 50 of those killed over rioting on May 14-15 were members.) The Associated Press reported that some of the protesters wore striped uniforms meant to mimic those worn by Jews in concentration camps during the Holocaust.

The Palestinians say the string of protests, collectively named the March of Return, oppose Israel’s blockade of Gaza and call for a return to their ancestors’ homes within Israel. Israel says the protests are an orchestrated attempt by Hamas to infiltrate Israel and harm its citizens and their property.

Approximately 10,000 Palestinians are rioting in five locations along the Gaza Strip security fence. Over the last few hours, terrorists launched dozens of kites and balloons with explosive devices attached to them over the fence. The objects exploded in the air pic.twitter.com/gDGPEre3MM