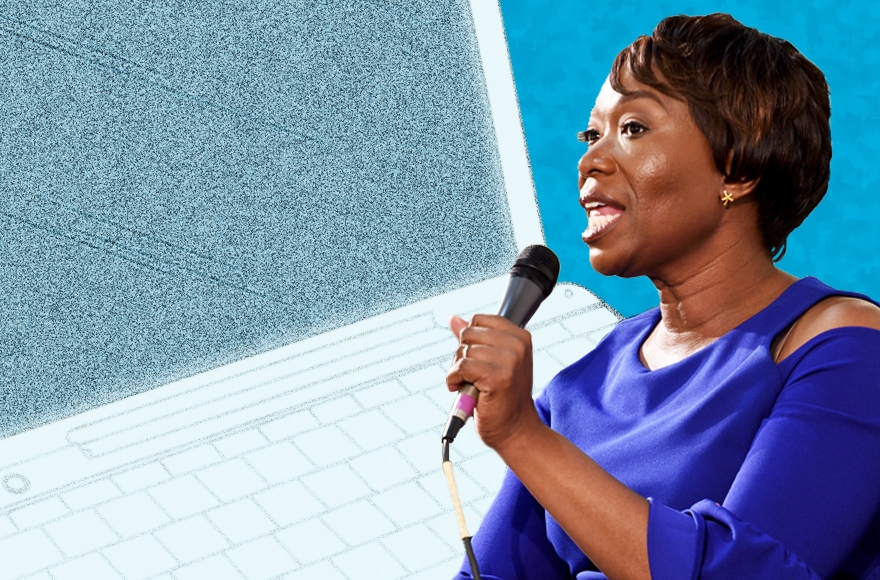 The 2006 posts on The Reid Report criticizing bar and bat mitzvah celebrations and addressing Iran were first reported by The Daily Caller. JTA found additional posts critical of Sharon and the media coverage of Jews and Israel.

They follow other reports since last December about a series of controversial posts on her long-shuttered blog. Reid, the liberal weekend host of MSNBC’s “AM Joy,” has since apologized for posts considered homophobic, another promoting a 9/11 conspiracy theory and an illustration superimposing Sen. John McCain’s head onto the body of the 2007 Virginia Tech shooter.

The Daily Caller reported a blog post in which she addresses another writer who argued that Iran was a “fanatical terrorist regime.” Reid countered that Tehran’s intention was not to eradicate the United States but Israel.

“Iran’s president may be nutty, but to my knowledge he hasn’t said he wants to destroy America,” she wrote. “[Mahmoud] Ahmadinejad has called for the destruction of Israel. Perhaps for [Charles] Krauthammer and other neocons there is no distinction, but there certainly is a distinction for me, for American taxpayers, and for the United States military, which is pledged only to defend us. Israel has a quite well armed military of its own, don’t ya know.”

“How does the modern Jewish teen spend her bat mitzvah?” Reid asked, according to screenshots obtained by The Caller. Answering her own question, Reid wrote: “Why with Irv Gotti and his soon to be rudderless label icons, Ashanti and Ja Rule, plus Omarion and about half a million dollars of your parents cash, that’s how.”

“Oh, and you use the night to launch you’re own clothing line too. Bling Bling!” she added.

The bat mitzvah, featuring the performers named in Reid’s tweet, was widely reported — and ridiculed — in the Jewish media at the time.

In additional posts obtained by JTA (which remain available through a Library of Congress archive), Reid addresses media coverage of Judaism and Israel and expresses both political and personal distaste for Sharon, who at the time of her writing was hospitalized with a debilitating stroke.

“For Israelis, the qualities that provoked dread in bleeding hearts like me clearly elicited a sense of safety and stability,” she wrote on Jan. 6, 2006. “I have never been a fan of Ariel Sharon. He remains, in my mind, a rather thuggish figure, eternally linked to the Sabra and Shatila massacres, which by rights should have driven him from public life.”

An Israeli inquiry found that Sharon bore “personal responsibility” for a massacre led by a Lebanese militia that left at least 800 Palestinian civilians dead in the Sabra and Shatila refugee camps.

Sharon, Reid wrote, “also is the ‘father’ of the disastrous (and still expanding) settlement movement that has brought Israel to the brink of self-destruction by shipping religious militants from Brooklyn and Europe along with impoverished Russian jews into the occupied territories in order to hold onto ‘Biblical real estate’ that the United Nations, and essentially everyone but the United States (both political parties) says belongs to the Palestinians — and by holding onto 2 million Palestinians who don’t want to be ruled by them.”

Reid expresses a more personal distaste for Sharon, citing “Sharon and the Israeli governments [sic] close involvement with Apartheid South Africa and the training of rebels in my father’s country, the then-Zaire, during the 1980s when Sharon was defense minister.”

Israel maintained strong and at times strategic relations with apartheid South Africa through 1987. Sharon served as the minister of defense from 1981 to 1983. In the role, he strengthened relations with South Africa, even visiting in 1981.

In a blog post about President George W. Bush’s 2006 State of the Union speech, Reid wrote that “you’ve got to love the ‘Jew cam’ that seeks out Joe Lieberman like a laser-guided missile every time anyone mentions the word ‘Israel.’”

Reid also references “a Black guy cam that finds John Lewis at any mention of civil rights or Dr. King,” an “Obama ‘African-American-cam’” and “the Laura [Bush] cam that catches the first lady’s lovely Xanax and martini smile – and her fabulous suit.”

When asked for comment on Reid’s blog posts, an MSNBC spokesperson sent JTA previous statements from Reid and the network about her blog.

In her statement, Reid expresses regret – backing away from her previous assertions that her blog had been hacked to include offensive content.

“While I published my blog, starting in 2005, I wrote thousands of posts in real time on the issues of the day. There are things I deeply regret and am embarrassed by, things I would have said differently and issues where my position has changed. Today I’m sincerely apologizing again,” Reid’s statement says. “There is no question in my mind that Al Qaeda perpetrated the 9/11 attacks or about Israel’s right to its sovereignty.”

Similarly, MSNBC also deviated from previous assertions by a security consultant that content on her blog had been fabricated.

“Some of the things written by Joy on her old blog are obviously hateful and hurtful,” reads the station’s updated statement, which was released this week. “They are not reflective of the colleague and friend we have known at MSNBC for the past seven years. Joy has apologized publicly and privately and said she has grown and evolved in the many years since, and we know this to be true.”

While The Daily Caller did not disclose their sourcing of Reid’s tweets, the screenshots indicate that the publication was utilizing an internet archive service similar to the Wayback Machine, if not Wayback itself.

Reid’s team has since disabled the Wayback Machine from linking to her blog by use of the internet protocol robots.txt.

JTA obtained Reid’s posts through the Library of Congress’ archives, as the MSNBC host’s blog remains inaccessible through the Wayback Machine.