‘The Band’s Visit’ wins 10 Tony Awards, including for best musical 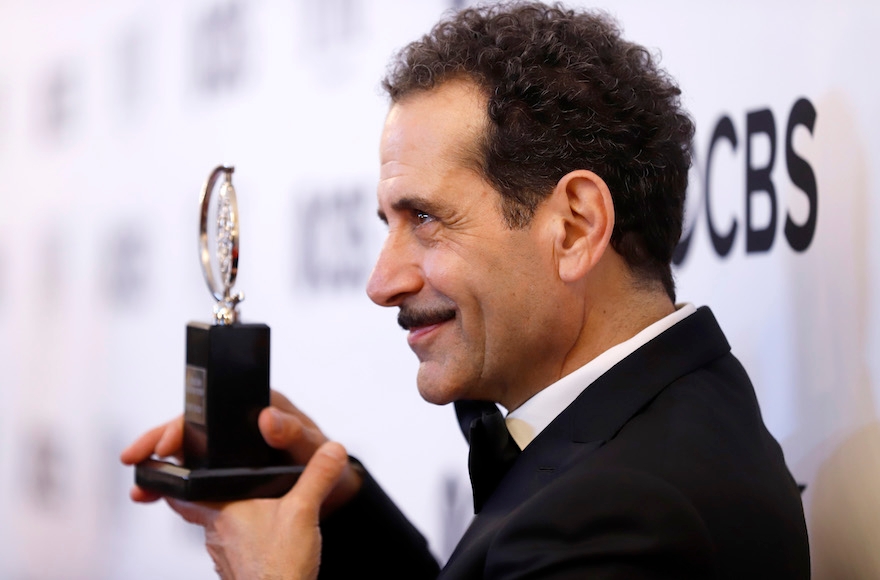 Tony Shalhoub, winner of the award for best actor in a leading role in a musical for "The Band's Visit," posing at the ceremony at 3 West Club in New York City, June 10, 2018. (Jemal Countess/Getty Images for Tony Awards Productions)
Advertisement

(JTA) — “The Band’s Visit,” a jewel-box musical based on an Israeli film about an Egyptian band stranded in a hardscrabble Negev town, won the 2018 Tony Award for best musical.

Ari’el Stachel, the California-born son of an Israeli-Yemeni father and an Ashkenazi mother from New York, won the award for best featured actor in a musical for his performance as a romantic Egyptian trumpeter in the musical.

Tony Shalhoub (“Monk”) won for Best Actor in a Musical and Katrina Lenk for best actress in a musical for their roles as, respectively, the leader of the band and the Israeli cafe owner who takes him in.

Stachel, 26, is making his Broadway debut in “The Band’s Visit.” The play is based on the 2007 award-winning Israeli movie directed by Eran Kolirin. In her acceptance speech, Lenk paid tribute to the late Israeli actress Ronit Elkabetz, who originated her role in the film.

In his acceptance speech, Stachel acknowledged his parents, who were in the audience, saying the musical led him to again embrace an identity he had long avoided.

“Both my parents are here tonight. I have avoided so many events with them because for so many years of my life I pretended I was not a Middle Eastern person,” he said. “And after 9/11 it was very, very difficult for me, and so I concealed and I missed so many special events with them. And they’re looking at me right now and I can’t believe it.”

He also thanked producer Orin Wolf “for telling a small story about Arabs and Israelis getting along at a time where we need that more than ever.”

“Angels in America,” playwright Tony Kushner’s 1993 epic about the AIDS epidemic, won the award for best revival of a play for the 2018 iteration starring Andrew Garfield.

Lindsay Mendez won for best performance by an actress in a featured role in a Musical for the revival of “Carousel.” Mendez,  whose father is Mexican American and who identifies herself as “a Mexican-Jewish girl,” said she had been advised to change her surname to downplay her ethnicity when she first moved to New York, but was glad she refused.