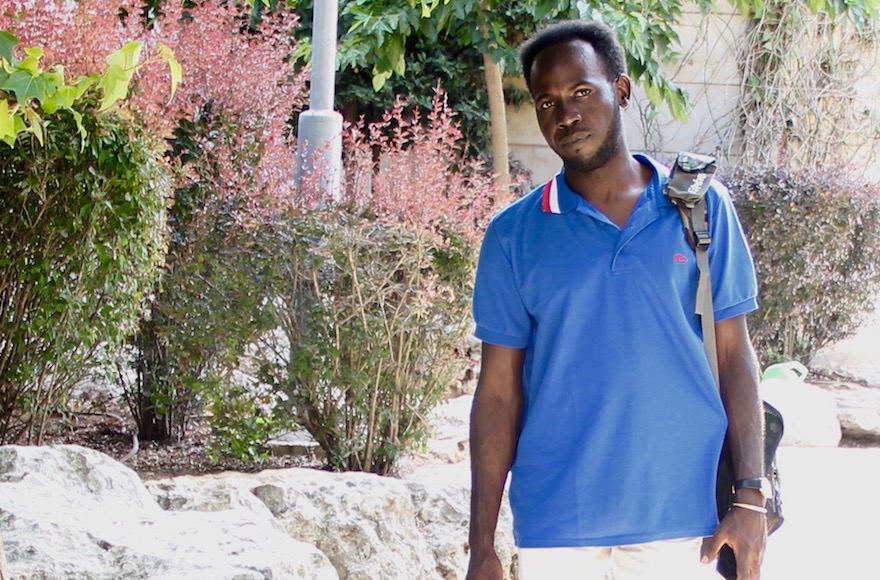 JERUSALEM (JTA) — Jack has one of those smiles that even the coldest of souls would feel obliged to mirror.

Sunglasses propped on his head and with a backpack loosely hanging off one shoulder, the first-year social work major flashes his familiar ear-to-ear grin from across the hall on Hebrew University’s Mount Scopus campus on a recent June day.

“You look so serious!” he lightly teases, nodding at the pen and paper in my hand.

We hug and walk outside to find a quiet spot on the lawn surrounded by lounging cats and students.

The afternoon sun beats down on Jack’s forehead as he rolls a cigarette.

“I never smoked until I went to Holot,” he says, a jolting reminder that he’s no ordinary college kid. As an African asylum seeker, Jack spent 19 months in that detention center along Israel’s Egypt border beginning in 2014.

Despite being surrounded by books rather than barbed wire, the Sudanese migrant is still not free.

Jack Muaawia Mohammad Adam Eisa and I first met in the summer of 2012 when American friends, sisters Emily Wind and Melody Coven, and I connected with a group of Eritrean and Sudanese asylum seekers in Jerusalem during our summer break to help them practice English.

Today, Jack and I catch up on what everyone in the group is doing and discuss the challenges of navigating life in Israel as two non-native Hebrew speakers — though to hear Jack’s story is to make my own complaints sound absurd.

Jack has lived in limbo since coming to Israel in 2008. He applied for refugee status, but like the vast majority of Africans in Israel fleeing genocide in Sudan and forced military subscription in Eritrea, Jack is still waiting for an answer.

In April, Prime Minister Benjamin Netanyahu temporarily canceled a proposed plan to deport the 38,000 African asylum seekers in Israel to other African countries after pressure from the Supreme Court (Israel does not have relations with Sudan). Netanyahu is now backing a law that would allow the Knesset to override Supreme Court rulings by a simple majority vote.

Earlier the same month, Netanyahu backed out of a widely lauded deal brokered with the United Nations to allow half of the asylum seekers to remain in Israel and the other half to be resettled in other Western countries.

According to Julie Fisher, an activist on behalf of the asylum seekers and wife of Dan Shapiro, the former U.S. ambassador to Israel under Barack Obama, the U.N. deal was the most logical answer in solving what she refers to as a “real humanitarian crisis” in Israel. After several years of volunteering with Israel’s African migrant community, Fisher recently founded the Consortium for Israel and the Asylum Seekers, an organization meant to serve as an “access point” for those outside of Israel to learn and connect with the issue.

“People will say, ‘Oh, thank goodness there is no deportation. Things are great,’” Fisher says in a phone interview with JTA. “And I say, absolutely that’s great that there is no threat right now. However, we have volunteers driving down every day to feed people. And that’s a crisis.”

The poverty and despair is only getting worse, Fisher says, in part due to the controversial “deposit law,” which forces asylum seekers working in Israel to deposit 20 percent of their salaries into a closed account that can only be accessed upon leaving Israel. 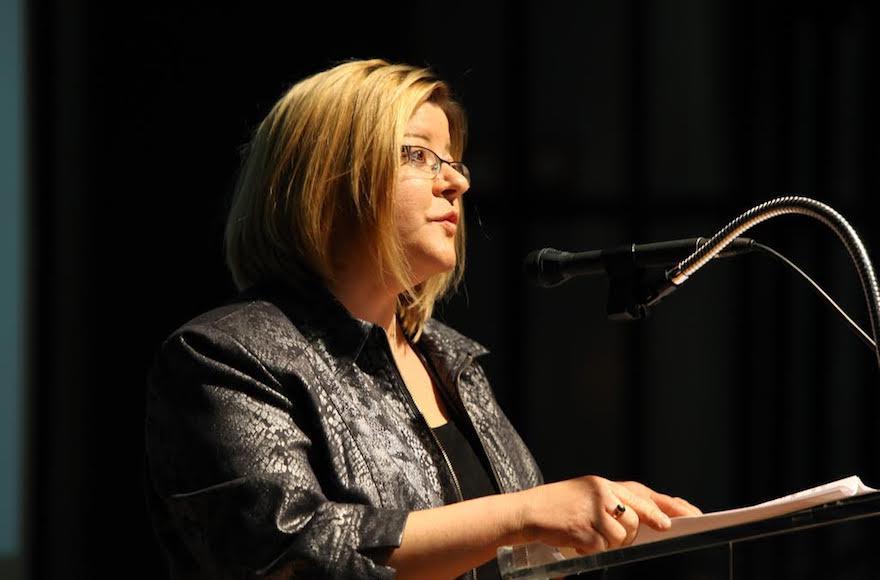 Supporters of the government’s hard line on migrants say many of the Africans cannot demonstrate that their lives are threatened at home — and that Israel has shown leniency when they do. Just last month, 300 more Sudanese from Darfur and similar regions were granted A5 humanitarian visas, which is a step below refugee status but allows migrants to obtain a driver’s license, travel documents and work permits.

The government also says the Africans reached Israel via Egypt, where their lives were generally no longer in danger. But Jack says that because of Egypt’s ties with the Sudanese government, he still did not feel safe.

Mostly the government and its supporters say Israel first must take into account its own citizens, especially residents of South Tel Aviv, who say the migrants have contributed to a high crime rate and the deterioration of an already low-income neighborhood.

Emmanuel Navon of the Jerusalem Institute for Strategic Studies said the United States, Germany and Italy all have similar policies of expelling illegal immigrants.

“Israel’s policy is consistent with international law and with the practice of other democracies, and it should not be judged by higher standards,” he wrote in January.

Jack says Israeli policies are meant to create a pressure-cooker of limitations to force asylum seekers to leave. As a community leader, Jack organizes protests in an attempt to change these laws.

But as Jack works to make conditions more tolerable, he is also applying for asylum in Canada with the help of Wind and Coven. Using the sisters’ contacts, he recently secured the necessary Canadian sponsors to move along with the application process.

Ayla Lefkowitz, one of the sponsors, says the application process takes 18 to 24 months. During that process, Jack will be assigned an application number which, according to Lefkowitz, will prevent him from being deported from Israel.

But Jack has been through enough not to get his hopes up.

Jack’s life — he believes that he’s in his early 30s, but there is no written record of his age — has been a series of gruesome losses and narrow escapes. In March 2003, he woke up to the sound of gunfire as Sudan’s pro-government militia invaded his village in Darfur, where the militias have been implicated for years in the deadly harassment of locals. Jack started running for his life, passing ditches containing bodies of those killed. That was the last time he saw his father, mother and siblings, now scattered in various African refugee camps.

Jack managed to make it to Khartoum, the northern capital of Sudan, where he was homeless for nearly a year. During this time he started learning English at the YMCA and eventually found work in construction.

After two years Jack had saved enough money to open a grocery store. In 2007, he began organizing demonstrations against the Sudanese government’s treatment of Darfurians.

Jack was arrested with other activists and says he was detained and tortured for three days. He used his savings to bribe one of the guards to help him escape; the others he was arrested with were hanged shortly thereafter. Jack took a taxi out of the city and continued on to Egypt, where he paid a smuggler to take him to Israel’s border.

He recalls his journey to Israel in painful detail. It was October 2008 and the nights were bitterly cold. The smuggler handed Jack and a group of others over to Egyptian Bedouins.

“I didn’t know if they were going to kill me or keep me as a detainee,” Jack recalls.

But after three days, in which Jack says he was given only a cup of water and half a piece of bread, the Bedouins gathered Jack and eight other asylum seekers in the middle of the night, pointed them toward Israel and let them go.

“Finally we reached Israel, but we didn’t know it,” he says. “Israeli soldiers started coming at us, speaking in Arabic to tell us that we were in a safe space. [Because of this], we thought we were still in Egypt and started running [away from them]. We ran all night until [the Israeli soldiers] finally caught us in the morning.”

Jack and the others were given food and checked by doctors. He says the minimal act of humanity sticks with him to this day.

Jack was taken to the Saharonim detention facility for two months before being handed a bus ticket to Tel Aviv. He was given an A5 humanitarian visa. In a foreign city with no money, Jack found a park to stay in South Tel Aviv, a popular gathering point for the neighborhood’s many African asylum seekers.

Three days later, an Israeli man pulled up to the side of the park and asked Jack and three others if they needed work.

“Will I have a place to live?” Jack responded. The man said yes, and the group jumped in. They drove to Jerusalem, where they were hired to work in housekeeping at a hotel.

After a while, Jack moved on to other odd jobs. He had money and friends, and life was manageable. That was until 2014, when he was sent to the Holot center and was told he would be held indefinitely. The center was an open facility near the Sinai border that hosted up to 1,200 migrants, who were allowed to leave to work during the day.

Conditions, Jack says, created an environment of such despair as to convince asylum seekers to return to their country of origin. He says studying in groups and cooking was forbidden. And the detainees were forced to check in three times a day, eliminating the possibility of going very far.

Jack’s friend in Holot, Abdel Azib, couldn’t handle the conditions and finally agreed to go back to Sudan. Two days after he returned, Jack says, Azib was caught and tortured to death.

“For me, that was a lesson that I couldn’t go back,” Jack says.

Instead, Jack focused on organizing the detainees to create policy change within the open-air camp. Their protests paid off: Roll call was changed to once a day and the group learning ban was lifted.

Nineteen months later, on Aug. 27, 2015, Jack was released after Israel’s Supreme Court ruled it illegal to hold asylum seekers in detention for more than 12 months. Jack says the psychological toll on him and fellow migrants in Holot was significant. The Israeli government shut down the compound in March.

Only last year did Jack begin to find his rhythm again when he started studying Hebrew in order to enroll in Hebrew University’s social work program. His studies are being supported by Jewish American philanthropist Joey Low, an advocate for asylum seekers.

Jack says he hopes to use his education to rebuild Darfur when the war ends. He also dreams of one day getting married and starting a family. In the meantime, he waits.

“We, as a people, naturally have our ambitions, our hopes,” Jack says. “There’s no future to hope for [in Israel]. [Here], I will always be an unwanted person.”