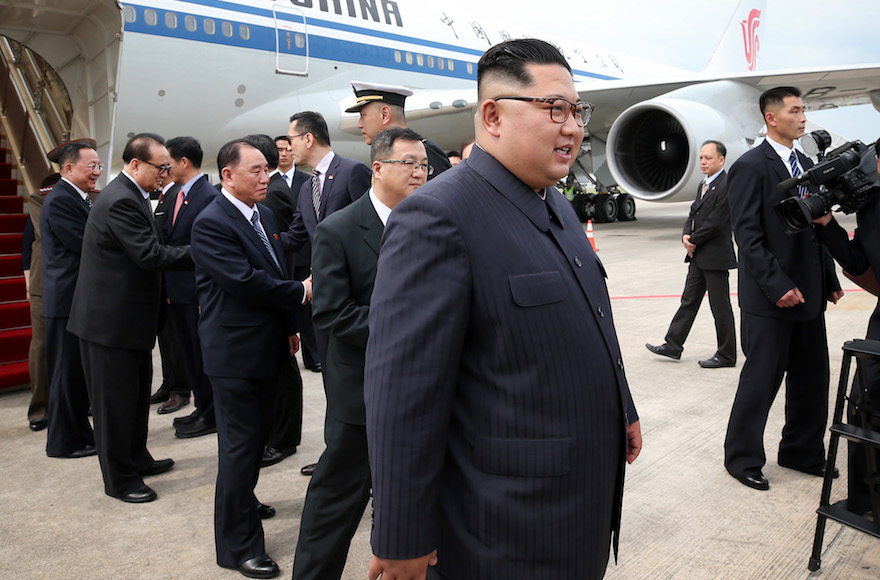 “Dangerous regimes should denuclearize,” Netanyahu said Sunday night to some 2,500 participants in the American Jewish Committee Global Forum in Jerusalem.

The delegates to the forum, being held for the first time outside of the United States, came from 26 countries.

Netanyahu noted the upcoming meeting between Trump and North Korean President Kim Jong-un, according to a readout of part of the speech issued by the Prime Minister’s Office.

The Israeli leader used the occasion to again ridicule the Iran nuclear agreement reached in 2015. Israel objected to the deal led by the United States and signed as well by China, France, Russia, the United Kingdom and Germany.

“I think the entire world, as we do, prays for the success of this effort,” Netanyahu said. “Now, imagine, imagine: Imagine that President Trump would come back with some deal, and Britain, France and Germany would applaud it and South Korea and Japan would say that it endangers their existence. You’d think you’d listen to this, right?

“So the same thing happened with the Iran deal. This deal was applauded by many in the international community who are not in the missile range of Iran, but Israel and Saudi Arabia and others said this deal will ultimately give Iran a nuclear arsenal, and they will use it first against us, and then with the long-range missiles that they’re building and that the deal doesn’t prevent them from building, against everyone else.”

Netanyahu said Middle East peace is illusive not because there is no Palestinian state, but because the Palestinians have conditioned peace on there not being a Jewish state.

“Imagine what would happen if President Abbas would not invest hundreds of millions of dollars each year in paying terrorists and the families of terrorists who murdered innocent people,” he said, speaking of the Palestinian Authority leader. “Imagine that he invested this in the project of peace. Imagine that they invested it in Ramallah, or for that matter in Gaza. Imagine what this would do. And I think it would change the world, and the Palestinians could aspire to become scientists and doctors. Instead, they erect statues to mass murderers.

Netanyahu also called on Diaspora Jews from the non-Orthodox streams to visit the egalitarian prayer section of the Western Wall, which has been enlarged and upgraded, though a more comprehensive plan to ensure egalitarian prayer at the holy site has been frozen by his government. The freeze enraged many non-Orthodox Jewish groups in the Diaspora.

“You should visit it. We’re enlarging it. We’re making it accessible, so anybody can pray at the Western Wall,” he said.

“Anyone here is welcome. Welcome. Feel free to come here. Feel free to pray,” he said. “When you touch the Wall, know this truth: This is your home. And this will always be the home of every Jew.”

Chancellor Sebastian Kurz of Austria was scheduled to deliver a major address to the AJC forum on Monday evening.