Denmark is considering a ban on circumcision. That has some Jews thinking about leaving. 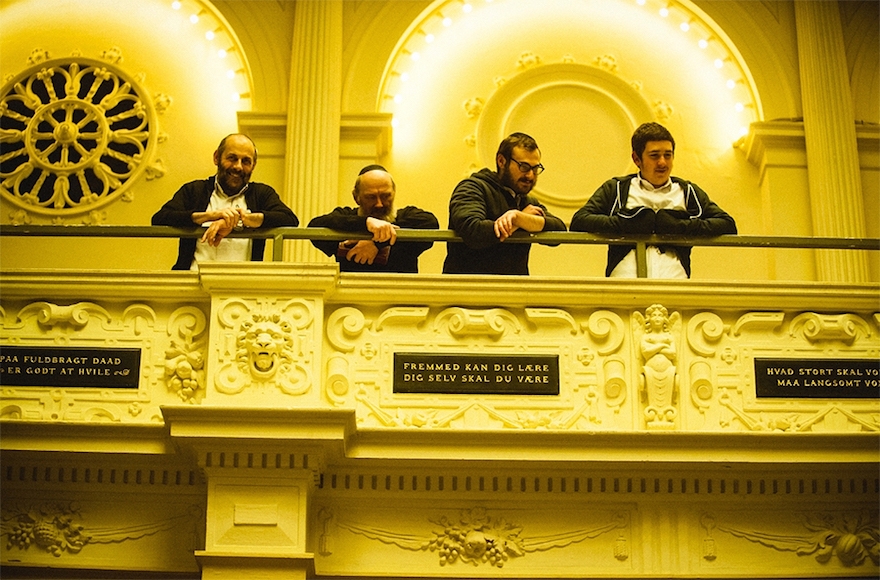 Danish Jews at a ceremony in Copenhagen on Dec. 25, 2016. (Chabad of Copenhagen)
Advertisement

COPENHAGEN, Denmark (JTA) — In 2015, a jihadist killed a Jewish guard outside this capital city’s main synagogue, where Hannah Bentow was having her bat mitzvah party.

Her sense of security as a Jew in Denmark was shattered, she told JTA last week. Bentow and dozens of teenagers stayed inside for hours as police pursued and later killed the man who gunned down the volunteer guard, Dan Uzan.

But Bentow said her decision to leave for Israel as soon as she finishes high school was sealed and reaffirmed by the precedent-setting steps undertaken this year in this Scandinavian country toward banning nonmedical circumcision of boys. The Danish parliament is set to become the first in the European Union to vote on a nonbinding motion calling to prohibit the practice.

The ruling parties said they would oppose a ban or a call for one, but the debate about it “makes me feel like I don’t belong, and like Denmark doesn’t want me to belong, either,” Bentow said.

Her words echo a sentiment shared by many Danish Jews, who are questioning their future in a nation where they increasingly feel caught between Islamist extremism and the xenophobia it triggers in their secularist society.

When Denmark’s Jewish minority of 9,000 people is “so pressed already, with armed police at our school and armed troops at shul, this [debate on circumcision] is sucking the marrow out of wanting to be Jewish,” said Mette Bentow, the mother of Hannah and two sons. Mette Bentow said her boys are the first in three generations of her Jewish family who were circumcised.

The language of the draft motion on circumcision that is pending a vote in parliament cites only child welfare concerns.

“The introduction of an 18-year minimum age for circumcision puts children’s interests and rights at the forefront,” the text states. It calls for a jail term of up to six years for anyone who performs a circumcision, and holds parents and guardians responsible whether the act happened in Denmark or not.

More than 50,000 people signed a petition on the Danish parliament’s website endorsing the text, which equates nonmedical circumcision of boys with female genital mutilation.

In Denmark and other European countries, campaigns to ban nonmedical circumcision of boys — a religious initiation rite that Muslims call khitan and Jews call milah – have been brewing for years.

But Danish promoters of the ban made a breakthrough following an amendment this year saying that petitions that receive 50,000 signatures within six months of their posting on the parliament’s website are expected to be brought to a vote as a nonbinding draft motion in parliament. The circumcision proposal cleared the signature hurdle within four months.

To many Danish Jews, the arguments about child welfare hide the real motivation behind the ban: xenophobia. 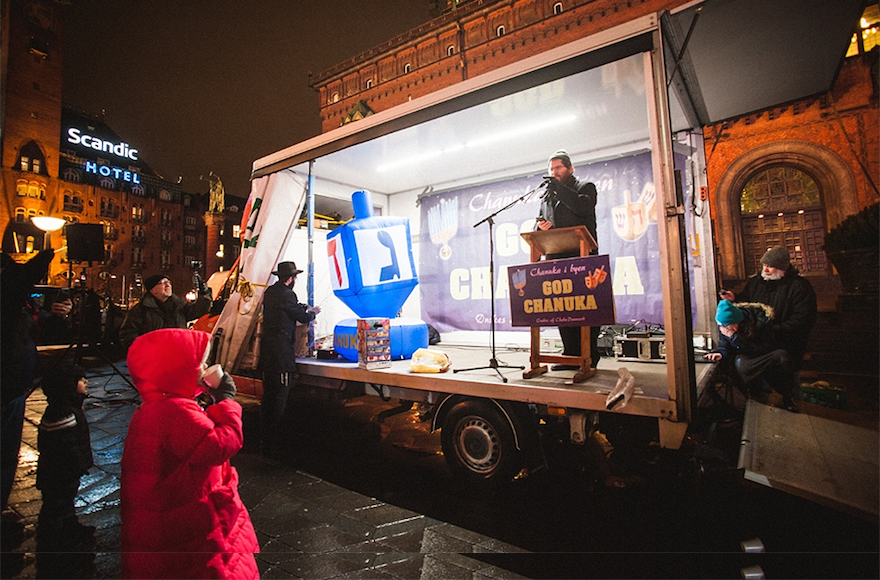 In addition to children’s welfare activists, “many others use the situation to show that they are against Jews, Muslims and they can express anti-Semitism and xenophobia without admitting to it,” Finn Rudaizky, a former leader of the Jewish community of Denmark, told JTA.

Over the past decade, Denmark has developed some of Europe’s strictest immigration policies, which The Washington Post last year called “a Muslim ban [that] was just called something else.”

And in the 2015 elections, the Danish People’s Party, which The New York Times has labeled “far right,” emerged as the second largest in parliament. It now supports the policies of the center-right party in power — including the ban passed this month on wearing face-covering garments like the ones favored by some Muslim women.

Denmark has already outlawed the slaughter of animals without stunning them first, as required by Jewish and Muslim religious laws; that was in 2014.

The following year, a Muslim cemetery was desecrated in Copenhagen. In a separate incident in 2015, a Danish man tried to burn down a mosque in the Danish capital while dozens of worshippers were inside.

Against this backdrop, “the debate about circumcision in Denmark is definitely part of a bigger picture where xenophobia plays a role,” said Hagai Ben-Avraham, an Israel-born academic who is married to a Christian Danish woman and has lived in Copenhagen for the past six years.

Whatever the forces driving the case against circumcision, the pending vote in parliament is causing Ruchama Elisabeth Munch — a 24-year-old Israel-born mother living with her Christian husband in the city of Aarhus — to question her future in Denmark.

Copenhagen’s main synagogue, where a guard was shot and killed in February 2015. (Wikimedia Commons)

At the circumcision last year of their first born, Yoav, Munch said she and her husband invited only close family partly because they “didn’t feel comfortable” inviting non-Jews to a ceremony that is often characterized in the media as child abuse.

“But when we have more children, of course it will affect our decision whether to live here, if we get branded as criminals” over milah, she said.

Munch also said that she has been “welcomed into Danish society” and has experienced no negative attitudes over her being an immigrant or an observant Jew.

“This is a tolerant country despite everything,” she said, “which is why I really don’t understand why so many people here want to ban milah.”

In a survey conducted in 2016 among 1,027 adult Danes, 87 percent of respondents said they support a ban on nonmedical circumcision of boys.

Amid the discomfort that this sentiment is causing Danish Jews, they are adjusting to the new reality that followed the 2015 synagogue attack. 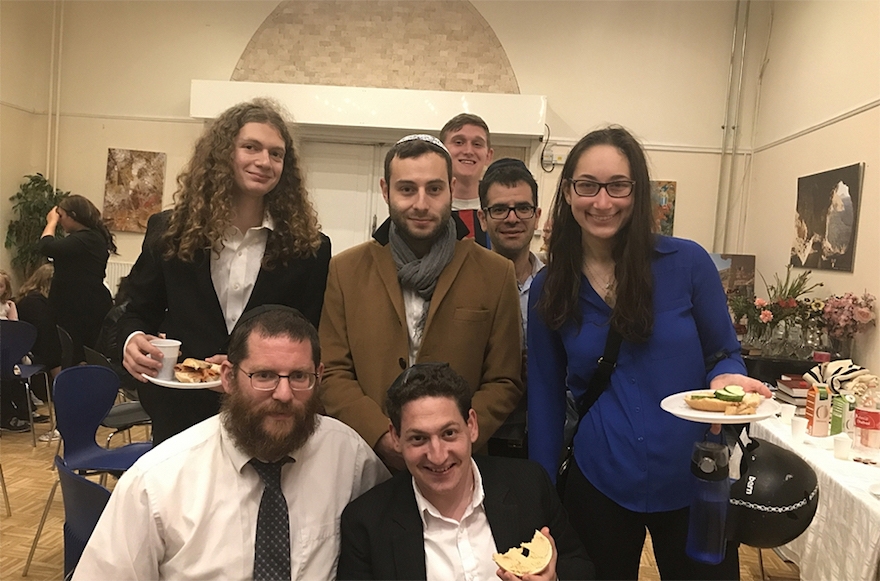 At the Chabad synagogue, machine gun-toting troops wearing bulletproof vests over camouflage fatigues gently tap their feet to the melody produced by some 30 Jews singing inside the building during a recent Friday night service. They smile and joke with Rochel Loewenthal, the wife of Yitzi, the local Chabad rabbi, who offers them a plate of kosher chicken and hummus dip.

Security was at its peak last week during the annual Jewish Culture Festival, where eight police and soldiers were on hand at an event Saturday night for young Jews attended by about 15 teenagers outside the city’s main synagogue. It has two doors, and anyone seeking to enter is questioned in the middle section when they are unable to enter or leave.

But Hannah Bentow, whose bat mitzvah was the target of the 2015 attack, doesn’t feel these measures are excessive. Weeks after the attack, someone smashed the window of Denmark’s only kosher shop and sprayed it with swastikas. Then it was attacked again in 2016. And last year a 17-year-old Muslim girl was convicted of plotting to blow up the Jewish school from which Bentow recently graduated.

For Bentow and her younger brother, 11-year-old Elias, the 2015 attack “introduced fear into their lives,” Mette Bentow said. Elias has asked that his father, Klaus, a security consultant who has worked for El Al, no longer wear his kippah in public.

Enjoying the last rays of sunlight in the backyard of her family’s riverview apartment building near the Chabad synagogue, Mette Bentow said that she and her husband often tell Elias not to be afraid of Muslims he sees on the street — so far with partial success.

Mette Bentow said she is deeply thankful for how Danish society “embraced” its Jews following the 2015 attack.

“I love Denmark, I love our royal house, I get goosebumps on national holidays,” she said as she sat with her family around a table laden with fresh cherries, sourdough Danish pastries and a pitcher of elderberry juice.

“But lately,” she added, “the more I live here, the more I get the feeling this might be the wrong place to raise a Jewish family.”