A child Holocaust survivor will retrace his escape route by bicycle 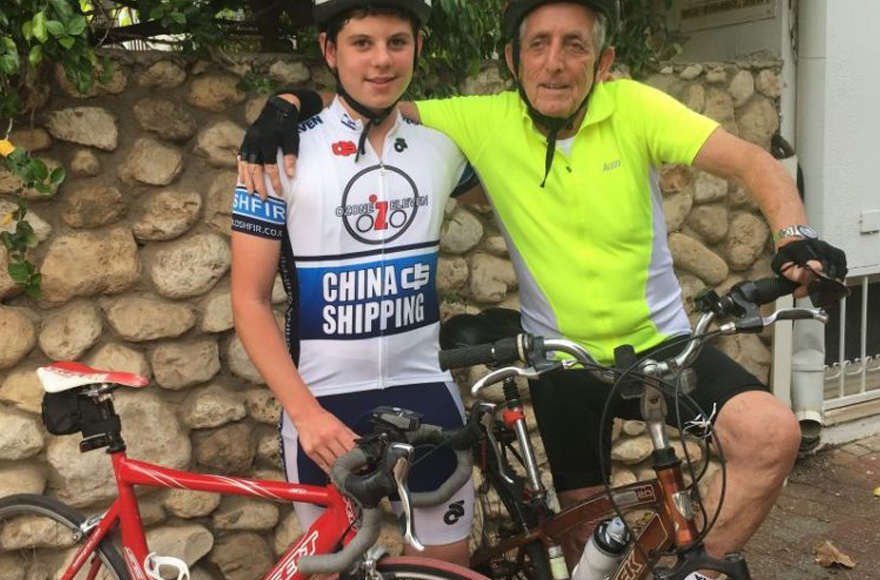 Paul Alexander, 80, and his grandson Daniel, 14, are both taking part in a commemorative cycle ride from Berlin to London to mark 80 years since the Kindertransport evacuation effort. (World Jewish Relief/PA Wire)
Advertisement

(JTA) — Paul Alexander, a former child refugee from Nazi Germany, is embarking on a bike trip that will retrace his original journey to freedom, paying tribute to the Kindertransport effort that saved him and thousands of other Jewish children 80 years ago.

Now 81, Alexander was a toddler when his mother handed him to a volunteer nurse on a train leaving Nazi Germany in 1938.

“I did this journey 79 years ago when I came out from the hatred of Nazi Germany to the safety in England,” Alexander told Agence France-Presse. “It’s extremely exciting and emotional to do this journey again after such a long time.”

The Kindertransport was an initiative that rescued 10,000 Jewish children from the Nazis by bringing them to the United Kingdom. Alexander sees his trip, following his original route, as a rejoinder to not only the hatred of Nazi Germany but to Hitler himself.

“The thought that came to my head is that this is my answer to Hitler,” he told AFP, “to sort of prove to myself, to show the world and to express my thanks for succeeding in life and being a happy married man with a family.”

“Having survived the Holocaust, having a family, being successful, this is my victory,” Alexander told the British Jewish News. “I won.”

Paul Alexander was saved by the Kindertransport, now he's riding the commemorative #BerlintoLondon cycle to honour both his mother and World Jewish Relief, the organisation who helped instigate the rescue of the children. #kindertransport80cycle pic.twitter.com/kltBBZGr02

Alexander’s trip will run from July 17 to 22, and will cover 600 miles over six days. It will start at a monument to the Kindertransport in central Berlin, go down the Dutch coastline, then onto a ferry to Harwich, United Kingdom before ending at London’s Liverpool Street Station.

Alexander will be joined by his son Nadav and grandson Daniel, in addition to 39 other cyclists. Some of the cyclists, who come from England, Israel, Indonesia and the U.S., are descendants of other children rescued 80 years ago, while others are taking part in memory of the escapees. World Jewish Relief, an aid organization that is the successor to the agency that carried out the Kindertransport, will fund the trip.

“We have organized this ride as a tribute to the amazing life-saving work of our predecessors,” Rafi Cooper, the charity’s director of communications, told AFP. “Tens of thousands of people would not be alive today were it not for their heroism back then.”

The Kindertransport began following Kristallnacht, the massive Nazi pogrom in November 1938 seen as one of the first major violent acts of the Holocaust. Protestant, Jewish and Quaker leaders appealed to British Prime Minister Neville Chamberlain to allow the emigration of unaccompanied Jewish children to the United Kingdom.

The first Kindertransport arrived at Harwich, England on Dec. 2, 1938, carrying 196 children from a Jewish orphanage in Berlin that had been torched by the Nazis on Kristallnacht. In the coming 18 months, 10,000 children fleeing Nazi-occupied Central Europe were brought to eventual safety in Britain.

“Seeing a child of one year and eight months away, you’ll appreciate it’s heartrending,” Alexander told BBC about his own journey to freedom. He says he has no recollection of the journey and that his first memories are of being in the London Underground during the Nazi bombings in 1940.

“I can’t imagine myself how can someone give his baby [away] without knowing if he will ever see him again,” Alexander’s son, Nadav, who himself has a toddler, told AFP. “It’s incredible. So this is an amazing journey for the three of us,” referencing his father and son.

In an aberration from many Holocaust-era survival stories, Alexander’s parents would soon join him in safety. His father was released from the Buchenwald concentration camp provided that he would leave Germany, and arrived in England 13 days after Alexander. His mother arrived on Sept. 1, 1939, the day the Nazis invaded Poland. Most of the children on the Kindertransport, he said, did not see their parents again.

80 years ago, thousands of Jewish children & teenagers survived Germany´s Nazi dictatorship because of the Kindertransport to Great Britain. Some 40 cyclists are setting out now on a ride from #Berlin2London, as part of the #kindertransport80cycle commemorative event by @WJRelief pic.twitter.com/596Nt0rFNx

Alexander later became a lawyer in London, and married an Israeli. They have three children and nine grandchildren, and moved to Israel, where they now live. Although Alexander retired from the bank where he worked as legal counsel in 2002, he continues to work today as a notary.

Sunday’s journey, he told AFP, is “a symbolic victory ride.”

“It is a very meaningful and poignant way of celebrating my life,” he said. “I thought it was poignant to do it with child and grandson.”

After Alexander and his fellow cyclists arrive in London, another of the surviving kinder, Rabbi Harry Jacobi, will lead a Kaddish.