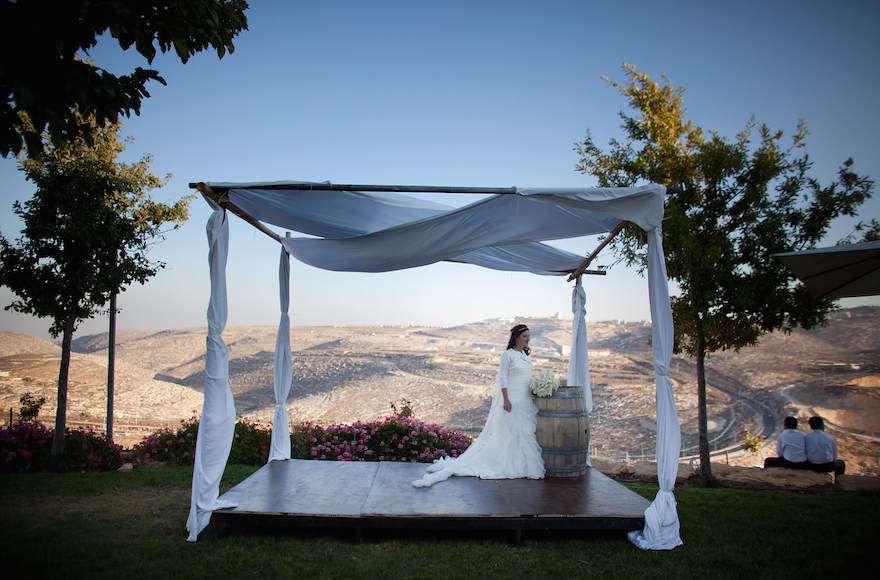 A Jewish bride poses for her wedding photos ahead of her wedding near the Jewish Settlement of Migron in the West Bank, August 17, 2011. (Uriel Sinai/Getty Images)
Advertisement

JERUSALEM (JTA) — The number of people rejected as being not Jewish for the purposes of marriage in Israel appears to have more than doubled in the past seven years, according to data from the country’s rabbinical courts.

During the same years, the number of people on a list of Israelis whose Jewish status is “pending clarification” rose from 90 in 2010 to 175 in 2017.

Up to 20 percent of Israeli couples are required to undergo background checks, most of them Russian speakers who immigrated under the Law of Return, which allows anyone with a Jewish grandparent to become a citizen.

Some 6,727 names appear on the Chief Rabbinate’s list of those deemed unable to marry as a Jew in Israel.

The figures appear in a report prepared by the Knesset Research and Information Center ahead of a meeting held Tuesday by the Committee on Immigration, Absorption and Diaspora Affairs. Tuesday’s hearing dealt with the large number of Israelis deemed not Jewish for the purpose of marriage by the Chief Rabbinate.

The rabbinical courts since 2016 have added people to the list of questionable Jewishness without their requesting certification of their Jewishness when, for example, another relative fails to have their Jewish status clarified.

Itim, a nonprofit that guides Israelis through the country’s religious bureaucracy, appealed the procedure to the Supreme Court last year, claiming that the rabbinical courts are not entitled to inquire into a person’s Jewish status unless that person sought state services on their own.

“The conduct of the rabbinical courts on this matter goes first and foremost against Jewish law,” Rabbi Seth Farber, the founder of Itim, said in a statement. “According to Jewish law, when a person comes and says that he is Jewish, he is to be believed. Furthermore, if a clarification is needed, it is customary to do everything possible in order to approve the person’s Jewish status, and not the opposite. The rabbinate has raised the bar to a level where most people who are Jewish wouldn’t be able to prove it. Moreover, they are invalidating Jewishness retroactively, which is unprecedented in Jewish history. The rabbinical courts today act, sadly, without basic morals or standards.”

The Rabbinical Courts’ administration told the Hebrew-language Walla news website that the data presented to the committee was “manipulated.”

“According to the data of the Rabbinical Courts, an overwhelming majority of 97 percent of the applicants for Jewish clarification receive a decision confirming their Jewishness, and only 3 percent, despite the efforts of the Jewish Inquiry Department to assist them, are not confirmed, apparently because in these cases they are not really Jewish,” Walla quoted the court as saying.