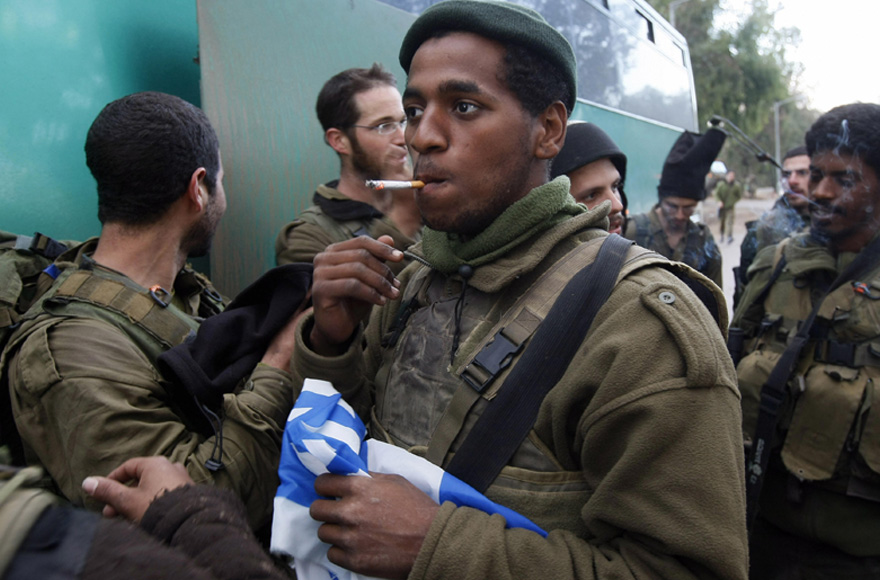 An Israeli soldier holds a national flag as he smokes a cigarette near the Israel-Gaza border, January 18, 2009. (Menahem Kahana/AFP/Getty Images)
Advertisement

(JTA) — On June 11, the Knesset’s official no smoking day, the Likud party’s Yehudah Glick announced that he was embarking on a hunger strike until the body passed a tax on loose tobacco equal to the tax on cigarettes.

Glick’s dramatic gesture was a sign of a seldom-discussed crisis in Israel: Smoking has made a comeback in the Jewish state, where overall tobacco usage rates outpace those in comparably-developed countries.

According to an official Israeli government report, sales of tobacco for water pipes rose 28 percent from 2016 to 2017. In the same time frame, sales of loose tobacco grew by 9.3 percent. The World Health Organization reports that 25.4 percent of Israelis 15 and older smoke tobacco; the global average is 21.9 percent.

“In Israel, taxes on water pipe/rolling tobacco are significantly lower than taxes on cigarettes, therefore it is not surprising that its demand is up,” Dr. Avital Pato Benari, the information and health promotion department manager at the nonprofit Israel Cancer Association, told JTA.

According to the United Nations Development Program’s Human Development Index, Israel is a very high HDI country, comparable to the United States, Canada and Germany, among others. And yet, Tobacco Atlas notes that 41.2 percent more men and 19.3 percent more women 15 or older smoke in Israel than on average in similarly developed countries. Israel, which prefers to distinguish itself from its Middle Eastern neighbors, is therefore very much like them in this regard.

“Although the Israeli government signed the FCTC in 2003 and ratified it in 2005, its implementation is lacking,” Benari said. “The price increases through higher taxes on tobacco products, such as rolling tobacco, is not sufficient to generate a behavioral change and reduce demand.”

Tobacco usage is particularly prevalent in the Israeli military. According to a 2017 study, 36.5 percent of Israelis smoke upon being discharged from the army in comparison to 26.2 percent before being drafted.

“I can tell you for sure that all throughout the army people smoke, and a large percentage of them started during their service,” Itay, a 21-year-old from Haifa who is serving in the Israel Air Force, told JTA. “I think two of the biggest reasons for that [tobacco use] would be social pressure. [It’s] not necessarily [that] people pressure them directly, but the social atmosphere creates that pressure.”

“The second reason would be that you can get breaks for that. In combat units, you get [a] seven-minute break for a cigarette every once a while during your day. In tough places, that can ease your day a lot.”

When contacted, the Israeli Ministry of Health said it is working with the IDF to mitigate tobacco use within its ranks while also arguing that tobacco use is simply popular among young adults.

“An increase in smoking rates among 18-year-olds occurs in many countries and is associated with the behavioral and social characteristics of this age, especially the exit from the school’s educational framework and the adoption of characteristics and behaviors that ostensibly express independence and maturity,” Eyal Basson, a Ministry of Health spokesman, told JTA. “The IDF chief of staff declared his intention to lead the IDF’s smoke-free policy, including a gradual cessation of the sale of tobacco products on IDF bases.”

Smoking on all IDF bases will soon be forbidden beyond commander-designated smoking areas, Basson said.

Tobacco use is also particularly high in the Arab community.

“I know it’s more common in normal Arab society than the Jewish one,” Margalit told JTA.

A 2009 analysis showed that smoking rates among Jewish men and women were 27.9 percent and 16.6 percent, respectively. Among Arabs, the corresponding rates were 48.8 percent and 5.2 percent. A 2017 article reported similar findings.

Basson told JTA that the Health Ministry budget includes hundreds of thousands of shekels for anti-smoking measures in the Arab sector.

“The ministry also plans to train mosque imams to discuss the matter in their Friday sermons, expand the number of counselors, and provide personal and telephone counseling for those seeking to quit smoking,” he said.

Benari said the Israel Cancer Association is also producing anti-smoking campaigns targeting vulnerable communities and addressing certain motivational factors. “In order to prevent youth from starting to smoke, and to reinforce the norm that smoking isn’t ‘manly’ the ICA created a new campaign in Arabic. The video has more than 50,000 views,” she said.

“Another campaign regarding hookah smoking was created both in Hebrew and Arabic,” she added. “Both videos became viral overnight.”

Last month, the Knesset approved a crackdown on smoking in public places, including concerts, event halls, sports venues, zoos and parking lots. (The Knesset was exempt, however.) Following the crackdown, Health Minister Yaakov Litzman released figures showing that 22.5 percent of all Israelis over 18 were smoking. Litzman also promised to seek to raise taxes on rolling tobacco.

Benari, however, is notably less enthusiastic about recent government action.

“The recent legislation, including the Knesset’s crackdown on smoking in public spaces, is a step in the right direction,” she said. “However, it is important to emphasize that only total bans work well. The NGOs need to vigilantly monitor the tobacco industry’s tactics and strategies to undermine or subvert tobacco control efforts.”

As of June 18, Glick tweeted that he was still on his hunger strike. On June 21, Glick and Eitan Cabel, chairman of the Knesset’s Economic Affairs Committee, announced that the committee passed a law forbidding advertising of tobacco products.

Glick called it “a significant step in the war on Death Factor No. 1 in the world.”