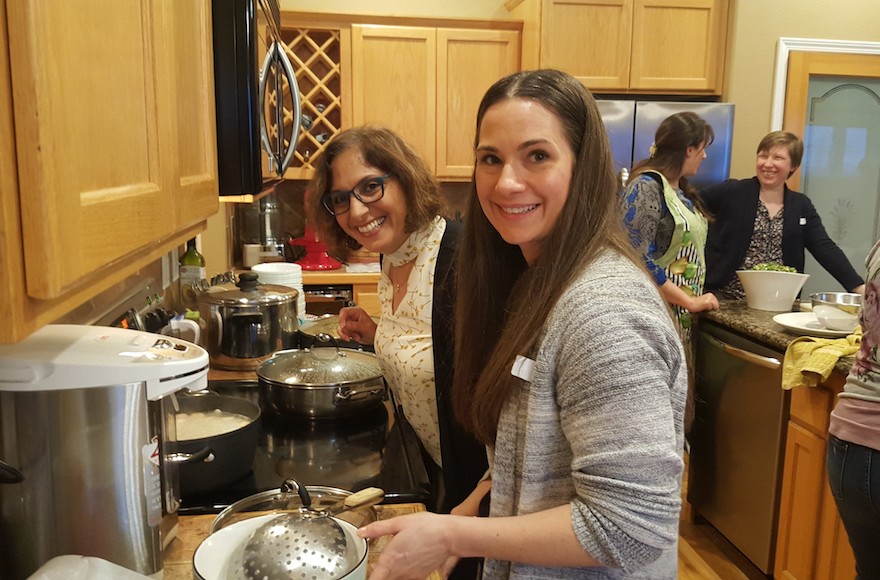 SAN FRANCISCO (JTA) – In the compact, open kitchen of the apartment here that Dalit Gvirtsman shares with her husband, about a dozen women are jostling for space. One is chopping tomatoes, another is sauteing onions and another is squeezing a few dollops of honey into cooked egg noodles.

Just beyond, the dining room table is set; each place setting features a napkin with the Israeli flag. A platter of bourekas with miniature Israeli flags has already been demolished.

It’s another monthly installment of Mevashlim B’Ivrit, or “Cooking Up in Hebrew,” with this Thursday night event celebrating Yom Ha’atzmaut, or Israeli Independence Day. This group of women, all Israelis, have come together to cook, eat and schmooze — and then eat a little more.

The get-togethers are opportunities to learn a little about the Jewish calendar and Israel, explore Jewish cultures through their cuisines, and forge bonds among Israelis, local Jews and sometimes non-Jews living in various communities.

San Francisco’s is one of 19 such groups formed around the world, though most of them are in the United States. Thirteen are for Hebrew speakers. (A Los Angeles version is in Hebrew “specifically geared towards LGBTQ and ally Jews.”) There are others in Poland (in Polish, mainly for university students) and Uruguay (in Spanish); both facilitators heard about the program and volunteered to start it. A new Hebrew-speaking group is being formed in London next year, as are English-speaking groups in Toronto, San Francisco and Oregon.

Some of them are women only and serve as a kind of “girl’s night,” but men also attend in some places. Some participants become such good friends that they schedule time to see each other outside of the sessions.

What started as a way for Israelis to stay connected with their culture in a Hebrew-speaking environment has burgeoned in unexpected ways: With Israeli food enjoying unprecedented popularity and interest around the world, the groups have become a way for others to connect with or learn more about Israel, too.

The program is part of the World Zionist Organization’s Department for Diaspora Activities, with cosponsorship in California by the Israeli House, a department of the Consulate General of Israel in San Francisco.

“Now the focus is to bring Israel and pluralistic Judaism to the Diaspora around the world,” said Dana Greitzer-Gotlieb, the Bay Area Regional director of the WZO and the originator of the idea. “That is why we’re translating the curriculum and starting new groups in English.”

But in another unanticipated outcome, non-Jews are wanting to take part, too.

Mevashlim B’Ivrit is in its third year in the Bay Area. Gvirtsman held it in another woman’s home in Berkeley the first year, but since then has used her own San Francisco home.

“You made those?” Greitzer-Gotlieb asked.

Gvirtsman, a Hebrew teacher at an area Jewish day school, has a passion for cooking.

“Food connects people,” she said. “Food is love. And the subject of Israeli food and Jewish food is so large.”

“Plus, cooking allows a certain kind of experience,” Greitzer-Gotlieb added. “When you create something with your own hands, you remember and enjoy it more.” 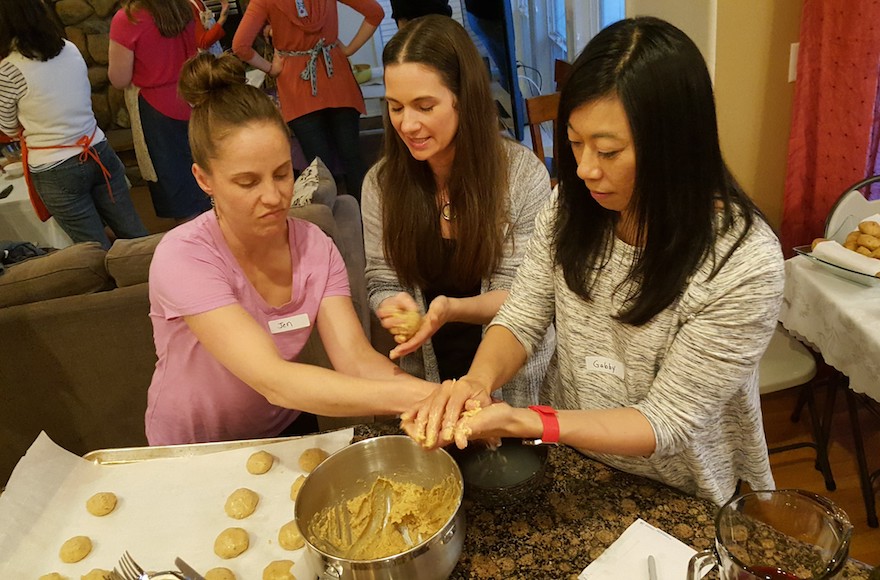 From left to right: Jen Binford, Rachel Brown and Gabby Nordell cooking for Passover at a Mevashlim B’Ivrit class in Boise. (Courtesy of Asaf)

But they don’t only cook. Gvirtsman plans each session, and each one has a different theme (her own group has a year’s head start on the others, so they are the “guinea pigs”). The evening starts around the table with a few readings chosen by Gvirtsman meant to foster discussion of the theme. She has done fall soups, for example, cooking with the seasons and one session about yeast, never repeating a topic.

Gvirtsman’s curriculum is used by all the groups, though once the program expanded, the WZO hired Israeli chef Einat Abramovich Partin, who lives in San Diego, as program manager. Partin now helps with the recipes and trains each facilitator via phone call or Skype.

There’s no rhyme or reason to where the groups pop up; it’s organic. Often an Israeli with a love for cooking will contact Greitzer-Gotlieb or Gvirtsman, having read or heard about the program elsewhere. But Partin is well connected and knows Israeli expatriates in many places.

For example, Boise, Idaho. Partin asked a friend of hers living there whether she’d want to be a facilitator. While this friend was too busy, she said she knew the perfect person and introduced her to Efi Asaf by phone.

“When you talk to a person, you can tell in the first two minutes if it’s a match,” Partin said. “I’ve never met Efi in person, but even over the phone, I fell in love with her right away.”

Partin is looking for two qualities in a facilitator.

“She needs to love food and she needs to love people,” she said. “Food brings people together, and if you love to cook, you are cooking with your soul and with love, people really feel that.”

Asaf taught a class about Passover to 20 women this year, none of them Jewish. All were “believers” of some kind, Christian and Mormon.

Rebecca Baughman attended the Passover class — and can’t wait for the next series.

Baughman, who is Christian, studied in Israel for a semester in college. Besides the cooking, she appreciates being invited into the facilitator’s home – in this case Asaf’s – which adds so much to the experience.

“What a precious woman Efi is,” Baughman said. “I want to be her friend. That she lets us come into her home to learn more about her and her culture and religion is so special. She lets us in on her life and what she believes.

“I don’t know how to make Jewish food, so it’s fun to have her walk us through recipes and then let us loose in her kitchen, guiding us along the way.”

Given that the Boise group is made up of non-Jews, Asaf says she feels like a mini-ambassador for Israel, as other topics of discussion are bound to come up.

“Sometimes they ask about politics or whatever’s happening then, and I tell them how I feel about it, but we mostly keep it centered around food,” she said.

Asaf has taught an all-Israeli group as well, and said the differences are huge. When explaining a dish to Israelis, they’ll all have several opinions about how to tweak the recipe, or share a memory about it. With non-Jews, she has to explain the unfamiliar dishes in much more detail.

“People really love Israel and our traditions in Boise,” she said. “Most people here are very interested in other cultures and religions, so they really like to hear about other places. Food is also such a great connector because most of us are moms and cooking all the time anyway.”

This kind of food as diplomacy is taking root in all kinds of ways. One participant in the San Diego English-speaking group that Partin hosts is Maryam Tarsa, an Iranian immigrant who was raised Muslim.

Tarsa attended Yeshiva University’s Albert Einstein College of Medicine and befriended many Orthodox Jews there. When she sent her children to the JCC preschool in San Diego, she became friendly with Partin.

She loves Cooking Up in Hebrew because “I’m not a good cook, I don’t really know how, and I figure it’s a good basic thing for me to know how to do at 48,” she joked. Plus, she loves the socializing.

As for Israeli food, she said, “People from different countries bringing their food traditions from around the world means it’s not just one taste. That’s what makes the food so amazing and taste so good.”

To start a group in your area (in Hebrew or English), contact chefnati.wzo@gmail.com.