Jared Kushner: Abbas might not have the ability to make a peace deal 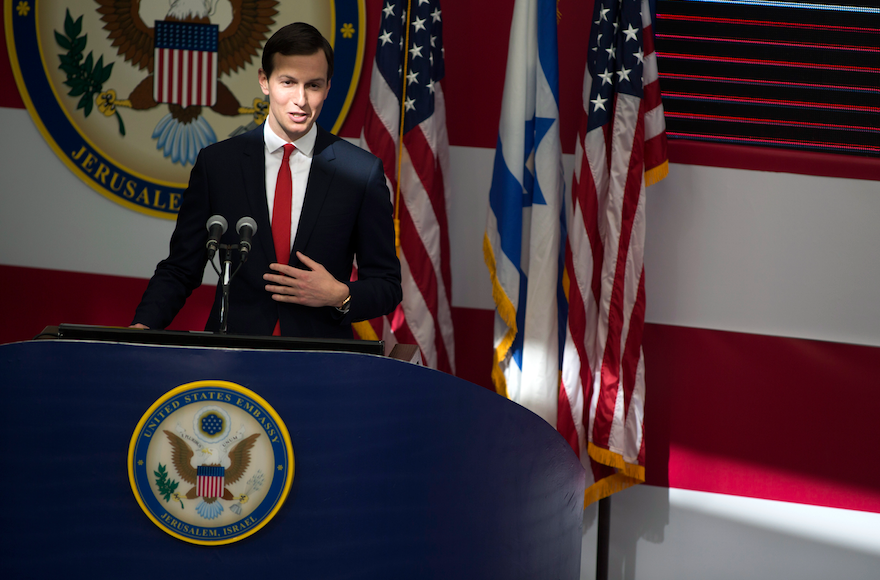 Jared Kushner speaks during the opening of the United States embassy in Jerusalem in Jerusalem, Israel, May 14, 2018 (Lior Mizrahi/Getty Images)
Advertisement

JERUSALEM (JTA) – In a rare interview with a Palestinian newspaper, Jared Kushner called out Palestinian Authority President Mahmoud Abbas for not having “the ability” to make peace with Israel.

“I do question how much President Abbas has the ability to, or is willing to, lean into finishing a deal,” Kushner told Al-Quds on Sunday, according to a transcript released by the U.S. National Security Council. “He has his talking points, which have not changed in the last 25 years. There has been no peace deal achieved in that time. To make a deal, both sides will have to take a leap and meet somewhere between their stated positions. I am not sure President Abbas has the ability to do that.”

Kushner also said that if Abbas is not willing to return to the negotiating table, he and his team of Middle East negotiators will air their proposed peace plan “publicly” and “soon.”

Kushner, who is Jewish and the son-in-law of President Donald Trump, said a peace deal would significantly benefit Palestinians economically.

“The Palestinian people are industrious, well educated and adjacent to the Silicon Valley of the Middle East — Israel. Israel’s prosperity would spill over very quickly to the Palestinians if there is peace.”

“[It] represents a policy of dictation rather than negotiations,” Erekat said in a statement. “It is the Trump Administration that has walked away from the negotiations, from international law and U.N. resolutions.”

Kushner and Jason Greenblatt, the Trump administration’s special envoy to the peace process, held meetings last week with leaders in Arab countries including  Egypt, Jordan, Qatar and Saudi Arabia, as well as in Israel, to discuss the peace plan and economic assistance to Gaza.

Abbas has refused to meet with Kushner and other members of the Trump administration, accusing them of bias toward Israel. The P.A. leader cut off all communication with the administration after Trump’s announcement in December that he would move the U.S. Embassy to Jerusalem. The official move was made last month.