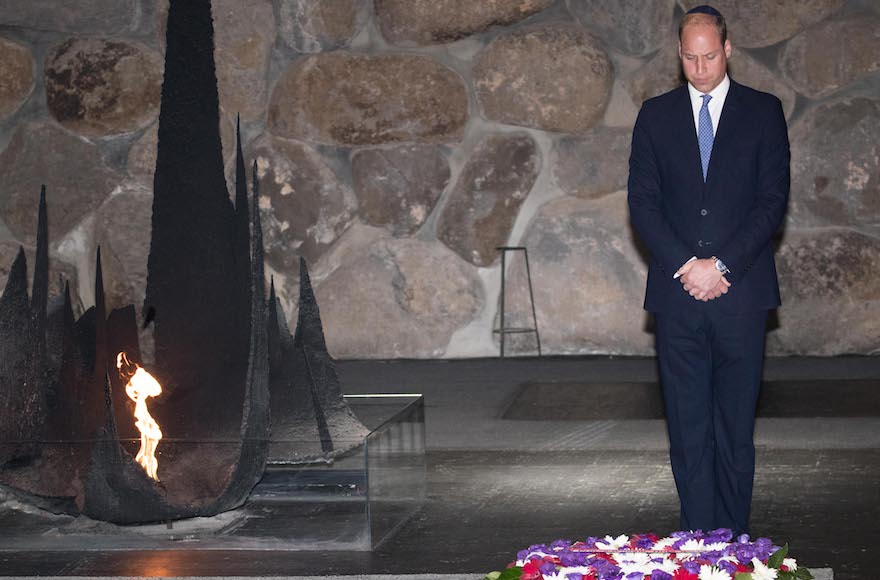 Prince William laying a wreath during a ceremony at the Hall of Remembrance in the Yad Vashem Holocaust memorial in Jerusalem, June 26, 2018. (Yonatan Sindel/Flash90)
Advertisement

Also Tuesday, the prince on the first official visit to Israel by a British royal met with two survivors of the Kindertransport, which brought thousands of Jewish children from across Europe to Britain and saved them from the Nazis.

Later in the day he met with Prime Minister Benjamin Netanyahu and his wife, Sara. They were joined by descendants of Haimaki and Rachel Cohen, who were saved during the Holocaust by Princess Alice, William’s great-grandmother.

At Yad Vashem, the prince wrote in the museum’s guest book.

“It has been a profoundly moving experience to visit Yad Vashem today,” he wrote. “It is almost impossible to comprehend this appalling event in history. Every name, photograph and memory recorded here is a tragic reminder of the loss suffered by the Jewish people. The story of the Holocaust is one of darkness and despair, questioning humanity itself.

“We must never forget the Holocaust — the murder of 6 million men, women and children, simply because they were Jewish. We all have a responsibility to remember and to teach future generations about the horrors of the past so that they can never reoccur. May the millions of Jewish people remembered by Yad Vashem never be forgotten.

“The actions of those few, who took great risks to help others, are a reminder of the human capacity for love and hope. I am honored that my own great grandmother is one of these Righteous Among the Nations,” he concluded.

William, who is second in line to the throne, visited the Holocaust memorial with its chairman, Avner Shalev, and British Chief Rabbi Ephraim Mirvis. The prince wore a black kippah as he laid a wreath in the Hall of Remembrance.

During his visit to the prime minister’s official residence in Jerusalem, the Netanyahus gave the Duke of Cambridge a replica Righteous Among the Nations Certificate for his great-grandmother, who was granted the title in 1993.

Princess Alice, who was married to Prince Andrew of Greece, lived in the Athens palace of her brother-in-law, Prince George of Greece, during World War II, where she worked for the Swedish and Swiss Red Cross. The family of Haimaki Cohen, a former member of the Greek Parliament, had fled to Athens and, after Haimaki Cohen’s death, his wife Rachel and their five children needed a place to hide. Several members of the Cohen family remained hidden at the palace until liberation.

On Thursday, William will visit Princess Alice’s grave on the Mount of Olives. She was interred there in the late 1980s at her request.

The prince also met in Jerusalem with President Reuven Rivlin, who asked him to convey a “message of peace” to Palestinian Authority President Mahmoud Abbas when the two meet in Ramallah on Tuesday.

“Your Royal Highness, I was born as a British subject. I walked to school every day down King George Street, but also past King David Street,” Rivlin told the prince. “We were here 100 years even before the Balfour Declaration, a declaration which helped the People of Israel, the Jewish people from all around the world bring to reality the idea and the belief that the Jewish people have to return to their homeland.”