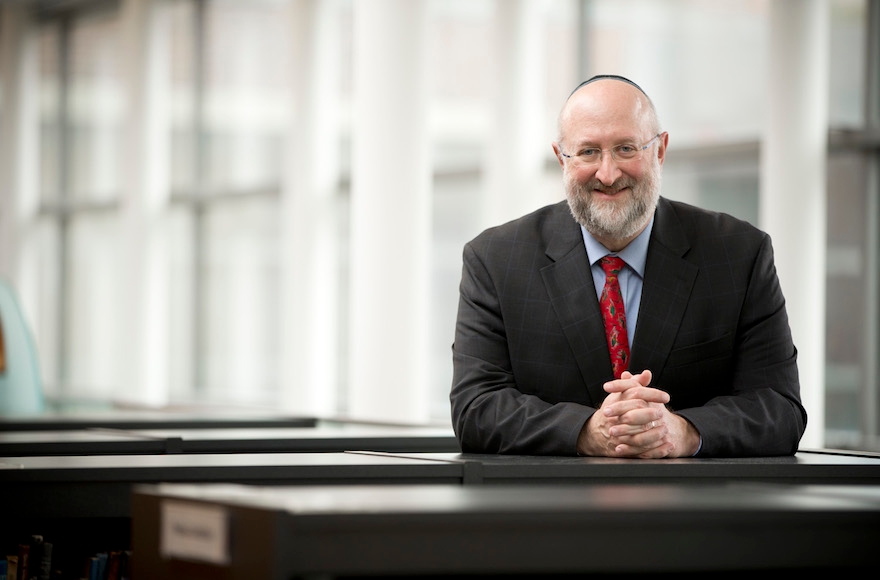 Ordained at New York’s Yeshiva University, the flagship of Modern Orthodoxy, he most recently was president of Hebrew College near Boston, which is devoted to pluralistic Jewish education. During his tenure, Hebrew College became the first non-Christian member of the Boston Theological Institute, a consortium of nine graduate schools of theology.

Now Lehmann is about to break another barrier, becoming the first rabbi to lead the Berkeley-based Graduate Theological Union, a consortium of more than 20 mostly Christian institutions that calls itself the most comprehensive center for the graduate study of religion in North America.

He is moving to Northern California’s Bay Area from Massachusetts after leading Hebrew College since 2008 and serving as board chair of the Boston Theological Institute for the past year. He will become the eighth president in the 56-year history of GTU, which includes centers and affiliates covering faiths from Buddhism to Islam to Swedenborgianism.

“Most people think of GTU as being a place where Christian institutions engage each other, but if you have a rabbi as president, I think that means that the kind of Christian dominance and hegemony, which is so much a part of American history, is being transformed,” Lehmann told J. “I think it’s a recognition that there are religious traditions that need to be given greater voice.”

Five Protestant seminaries joined to form GTU in 1962, creating the first cooperative graduate study program in the United States leading to a doctor of theology degree. The first Catholic seminary joined the group two years later. Within a few years, the member institutions pooled their collections to create one of the nation’s top theological libraries.

A Center for Judaic Studies was established in 1968, and GTU has added several other centers in recent years while expanding its curriculum to include a greater focus on areas as diverse as art, women’s studies and Black Church/Africana Religious Studies.

Deena Aranoff, director of what is now known as the Richard S. Dinner Center for Jewish Studies, said it’s significant that a non-Christian will now be leading GTU.

“To have someone who is not Christian leading the consortium speaks to the fully interreligious character of the Graduate Theological Union,” she said. “It means we’re in a new era of interreligious scholarship and it no longer needs to be facilitated by the Christian majority.”

Riess Potterveld, a United Church of Christ minister who is retiring after five years as GTU president, said the selection of Lehmann as his successor is part of the consortium’s evolution as an interreligious institution. Such changes reflect global changes as well as the direction of religious studies in the 21st century.

“When the GTU began in the 1960s, it was hard enough being ecumenical. Since then, we’ve really embraced a world that’s very pluralistic,” Potterveld said. “It’s important to embody some knowledge and awareness of the values and perspectives that come out of those traditions. It’s not just about studying other religions, but also about how they affect the world.”

Lehmann, who also has been a professor of pluralism and Jewish education at Hebrew College while serving as the school’s president, is slated to begin Aug. 1 at GTU. Moving to the Bay Area will reunite him with his brother, Len, a Palo Alto engineer and philanthropist who co-founded Kehillah Jewish High School and now runs Portola Vineyards.

Lehmann said that interreligious collaboration and understanding are more important now than ever, given the religious diversity in the U.S. and elsewhere and the religious violence in many parts of the world.

“And also I think we’re living in a time where there are real global challenges that require religious responses,” he said, citing environmental concerns and gender inequality. “We’ve got some real problems, and I’m not convinced that the mechanisms of our secular democracies are enough.

“There’s a lot the religions can learn from each other. There are profound differences, and they should be celebrated and understood. It’s not about the homogenization of religions. It’s about seeing the insights that I think the world desperately needs, and I’m excited to play a small part in that.”

Aranoff also pointed to a global “communication crisis” because of the abundance of information now available to everyone on the internet, and said that makes interreligious work even more valuable.

“There’s a lot of misinformation and partial understanding,” she said, which means that the “deep, ongoing inquiry and the steady, constant relationships that are formed among students and faculty at GTU are crucial. People who study at the GTU become ambassadors of a certain kind of knowledge of the other that is very deep and filled with empathy.”

Lehmann envisions a larger community role for GTU, in part by developing digital platforms and also by expanding events and programming beyond the East Bay to San Francisco and the Silicon Valley. Greater collaboration with the neighboring University of California, Berkeley, is another option, he said, especially since the university discontinued its undergraduate religious studies program in 2017 due to a lack of enrollment.

“I think the GTU has been kind of a hidden gem, and one of my goals is to bring it out of the closet, so to speak,” he said. “I think we have to figure out how to engage a broader audience. It’s probably true that Northern California is more secular than many other places, but on the other hand there’s also a palpable interest in spirituality.”

A broader GTU contribution to the Bay Area Jewish community is another of Lehmann’s goals. His groundbreaking appointment as president of the consortium makes that connection much more likely, since he said the selection of a rabbi “demonstrates the commitment of GTU to interreligious learning and leadership.”

“I’m coming as an outsider to the dominant Christian culture that has nurtured GTU, and that’s inevitably going to bring a different set of perspectives,” he said.

“I’m not representing a majority culture, so for the other minority religious cultures I think there’s going to be a sense that there’s greater openness and acknowledgment of the kind of equal playing field that the religious traditions need to have within the GTU consortium and culture. And I think I’m going to bring a different set of symbols that I hope will just open up the conversation.”