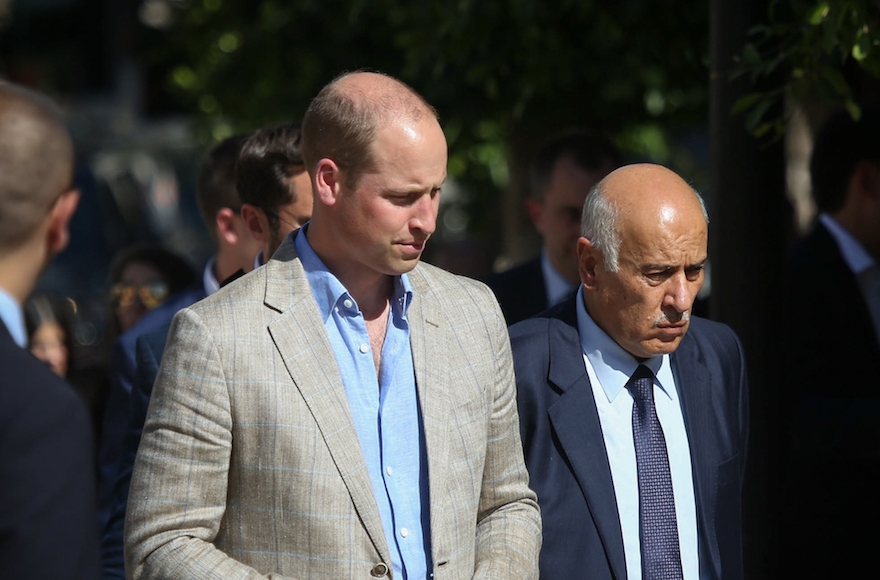 JERUSALEM (JTA) — Britain’s Prince William described the Palestinian Authority as a country while making the first visit by a member of the royal family there.

“I’m very glad our two countries work so closely together and have had success stories with education and relief work in the past, so long may that continue,” the prince told P.A. President Mahmoud Abbas on Wednesday in the West Bank city of Ramallah, where he was greeted by an honor guard.

The prince’s use of the term country to describe the P.A. raised some eyebrows in Israel, though Israel’s Foreign Ministry did not comment on it.

On Wednesday evening at the British consul general’s residence in Jerusalem, William told the Palestinian guests: “My message tonight is that you have not been forgotten … I hope that through my being here and understanding the challenges you face, the links of friendship and mutual respect between the Palestinian and British people will grow stronger.”

He also expressed his hopes for “peace for the region.”

The prince, who also holds the title of the Duke of Cambridge, visited the United Nations-run Jalazone refugee camp in Ramallah, where he met with mothers whose babies were being vaccinated as part of a West Bank health program, and with the student government at the camp’s school for girls.

He also played soccer with Palestinian children at the Ramallah Friends School and attended a cultural festival in the city.

Earlier in the day he met this year’s Eurovision winner, Israeli singer Netta Barzilai, in Tel Aviv. Admirers greeted the pair as they strolled along the city’s historic Rothschild Boulevard. Barzilai gifted the prince a mini-looper, the piece of digital sound mixing equipment that she uses to enhance her music, to which the prince responded: “You haven’t heard me sing! You wouldn’t want that!”

On Thursday, the prince will visit the grave of his great-grandmother Princess Alice, who rescued a Jewish family during the Holocaust, at the Russian Orthodox Church of St. Mary Magdalene in Jerusalem. Other Old City sites he is said to be visiting, though they do not appear on his official schedule, include the Western Wall, Al-Aqsa mosque and the Church of the Holy Sepulchre.